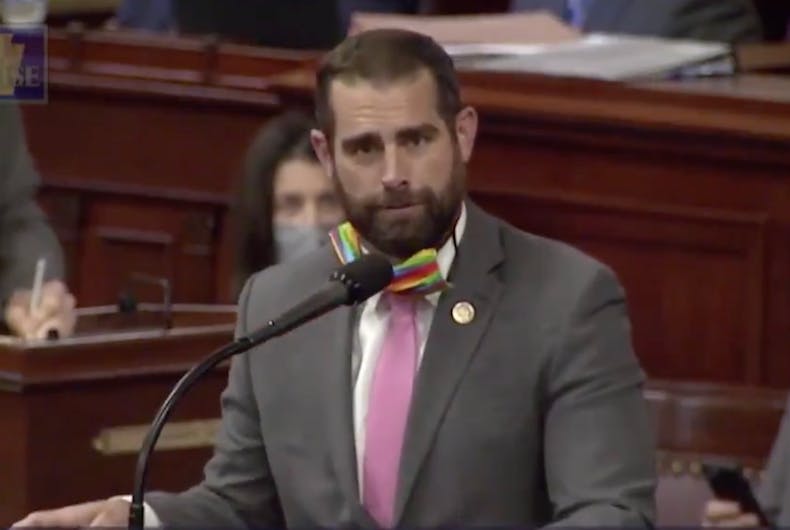 Out Pennsylvania Rep. Brian Sims (D) made national news this week for posting a profanity-laden video on Facebook after he found out one of his Republican colleagues had tested positive for COVID-19 and several other Republicans who had had contact with him continued to attend meetings without wearing face masks.

Republican leadership knew that their member had tested positive but didn’t tell Democrats that they were being exposed to the novel coronavirus, putting lawmakers, their staff, and their families at risk.

Sims’ Facebook Live video was broadcast from his office and the visibly angry politician held nothing back. Riddled with curse words and blunt language, Sims ripped into Republicans and demanded resignations and investigations.

But when Sims took to the state house floor to address the issue, he says Rep. Jerry Knowles (R) called him “a little girl” during his speech, yelling it across the chamber. Sims spoke with a rainbow facemask lowered so he could speak.

My colleague @repknowles just yelled from the Floor while I was speaking to the House to call me a “little girl!” The irony of a guy from a Party scared to death of women, who himself spent years ensuring pedophile priests couldn’t be prosecuted, thinking that’s a slur is thick.

Now women’s groups, parents, and fellow legislators are rallying around Sims to encourage more women to get into politics.

“They’re losing,” Sims wrote later. “I know it doesn’t feel like that after days like this. But their behavior wreaks [sic] of fear and failure.”

Knowles’ Democratic opponent in the upcoming election responded to Sims’ tweets, pointing out that his campaign is fueled by an “amazing team of talented women.”

Hey @BrianSimsPA I’ve got your six! So does the amazing team of talented women helping me to run against @repknowles. Rachel, Heather, Jess, Allyssa, my badass Army wife Carrie, and many more! No more running unopposed and consequence free for Rep. Knowles. #LeadershipMatters

Tonight on the floor of the PA House, state Rep. Jerry Knowles (R-Caveman) yelled "little girl" at Rep. Brian Sims, a vocal LGBTQ activist. In the process of raising a tough-as-nails little girl, I can tell you that his attempt at an insult failed miserably.