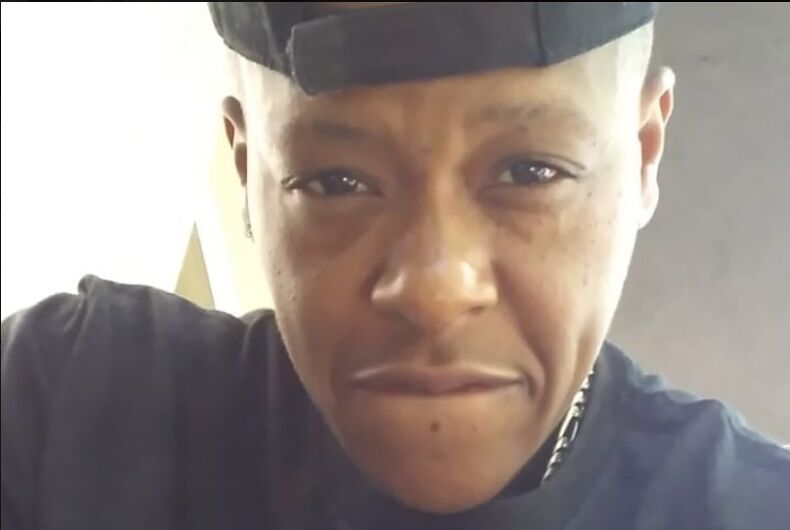 Tony McDade, a black transgender man, was fatally shot by a white police officer in Florida this past Wednesday, the third officer-involved shooting in the Tallahassee area this past year.

Witnesses say that police shot McDade immediately after exiting their vehicle without shouting any warning at the 38-year-old, while police claim that he pointed a handgun at an officer before they even exited their vehicle and that the shooting followed “standard protocol.”

At 10:45 a.m. on May 27, police responded to a fatal stabbing. They said that they saw McDade, who fit the description of the suspect, when they arrived.

In a statement, the Tallahassee Police Department said that McDade “then made a move consistent with using the firearm against the officer, who fired their issued handgun, fatally striking the adult female suspect.”

He later died at a hospital.

A lot of people out here at Holton street apartments and they’re visibly upset. Dozens of people crying. Officers are investigating right now. All they can tell us is that an officer shot someone in this complex. @abc27 pic.twitter.com/z1z6t7qOYl

A neighborhood resident and witness told WFSU that he heard seven or eight shots fired.

“I walked down this way, as soon as I get around this curve, I just hear shots,” he said. “I see the [McDade] right behind the tree, but I see for him [the police officer] just jump out the car, swing the door open and just start shooting.”

The witness said that police didn’t shout a warning at McDade before opening fire: “I never heard ‘Get down, freeze, I’m an officer’ – nothing. I just heard gun shots.”

“All preliminary findings are that the officer acted in accordance with their training,” said Tallahassee Police Chief Lawrence Revell in a press conference. He said that he wouldn’t discuss the specifics of McDade’s death since it’s part of an on-going investigation, but he said that if officers believed that they were in danger they could have shot without warning.

McDade’s Facebook account is still active. He posted a video posted late on Monday night in which he talked about his life since he was released from prison after serving a 10-year term this past January. He said that he was robbed, was in a car accident, and attempted suicide in the months since he was released.

He said that on that day he had been attacked by five men. He did not name them – instead just referred to them as “pu***es” – but he showed a wound on his arm.

“It was five, against my one,” he said in the video.

He said that one of the men hit him, and he said, “You hit like a girl.” He said that the others then attacked him, pushing him to the ground and beating him while he was in the fetal position.

“But you know what? Y’all ain’t gonna look the same when them bullets touch you,” he said in the Facebook Live video, saying that the five men were “going to die if I ever see your face.”

“I will not be going back to prison,” McDade said. “Me and the law will have a standoff after I end you b****es’ lives.”

Police say they are reviewing the video.

“Tony’s death brings national scrutiny and is a stark reminder of the epidemic of violence that disproportionately claims the lives of Black transgender people in America,” said Equality Florida in a statement.

The statement connected McDade’s death to other Black people killed by police officers, including George Floyd, who was killed by a police officer this past Monday who knelt on his neck for at least seven minutes while handcuffed.

Equality Florida said that they will host a virtual town hall on Wednesday, June 3, to “discuss the intersections of systemic racism and injustice against the LGBTQ community and call on supporters of LGBTQ civil rights to take action.”