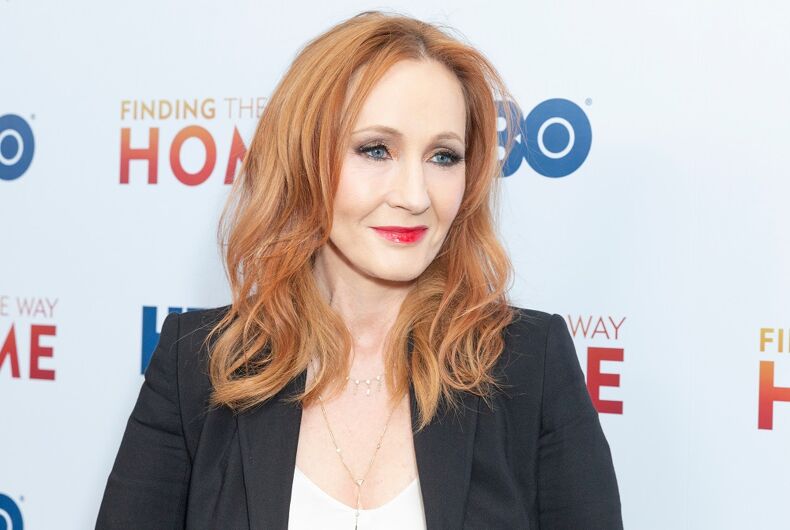 Harry Potter author J.K. Rowling has continued her streak of endorsing anti-transgender speech, but this time the beloved writer has accidentally involved a nine-year-old girl in her prejudice.

Rowling has been retweeting children’s drawings of an upcoming character for a project she’s working on. But when she shared the girl’s sketch, she also included a line copied from an anti-transgender website that included the f-bomb and extremist rhetoric.

Rowling, who has a strong Twitter presence, has liked transphobic tweets in the past, although her publicist said that the author clicked “like” by accident in a “clumsy and middle-aged moment.”

In December, Rowling tweeted that “sex is real,” a common statement used by transphobes to imply that sex assigned at birth determines a person’s entire life, effectively erasing gender identity. She used the hashtag #IStandWithMaya in that tweet, a reference to British anti-transgender activist Maya Forstater, who lost her job at a progressive organization for her statements about transgender women, including “men cannot change into women” and that transphobia against trans women only “hurts men’s feelings.”

But the most recent tweet referenced a 2017 dust-up between transgender activist Tara Wolf and anti-trans agitators, sometimes referred to as TERFs (Trans-Exclusionary Radical Feminists). Wolf was convicted of hitting activist Maria Maclachlan during a protest.

While media outlets appropriately used the pronoun “she” in reference to Wolf, anti-trans sites used “he” in news stories about the incident. TERF activists refuse to use the proper pronouns for transgender people.

“I love this truly fabulous Ickabog, with its bat ears, mismatched eyes, and terrifying bloodstained teeth!” Then her tweet took a turn: “In court, Wolf claimed the Facebook post in which he’s said he wanted to ‘fuck up some TERFs’ was just ‘bravado.'”

The tweet was quickly taken down but not before the internet saw it.

Rowling apologized for the tweet in a later tweet, explaining that she was reading a message about the story when she sent the tweet. She didn’t express regret for the subject matter, only that it was sent to a minor.

“I’m going to say this once, and I’m going to say it calmly and politely,” Rowling tweeted after she removed the post. “I certainly didn’t mean to paste a quotation from a message about the assault of Maria Maclaughlin into a tweet to a child, especially given the language used by the person convicted of the crime.”

“However, I am not – as many of the people now swarming into my mentions seem to think – ashamed of reading about the assault. You should know by now that accusations of thought crime leave me cold. Take your censorship and authoritarianism elsewhere. They don’t work on me.”

She later re-posted the little girl’s photo and included a subtweet intended for the girl’s parent.

“Sorry about the random and totally unconnected sentence that made its way in there. I accidentally pasted in part of a very un-Ickaboggish message I’d just received (Flushed face),” she sent. She offered to send the girl an autographed copy of one of her books.

The LGBTQ community, which has given Rowling multiple chances, wasn’t impressed with her non-apology.

Twitter user Jamie Drew summed up the response, asking Rowling, “Are you sorry for the mistake, or sorry for perpetuating transphobia?”

Rowling did not reply.

(Sorry about the random and totally unconnected sentence that made its way in there. I accidentally pasted in part of a very un-Ickaboggish message I'd just received 😳)

Are you sorry for the mistake, or sorry for perpetuating transphobia?