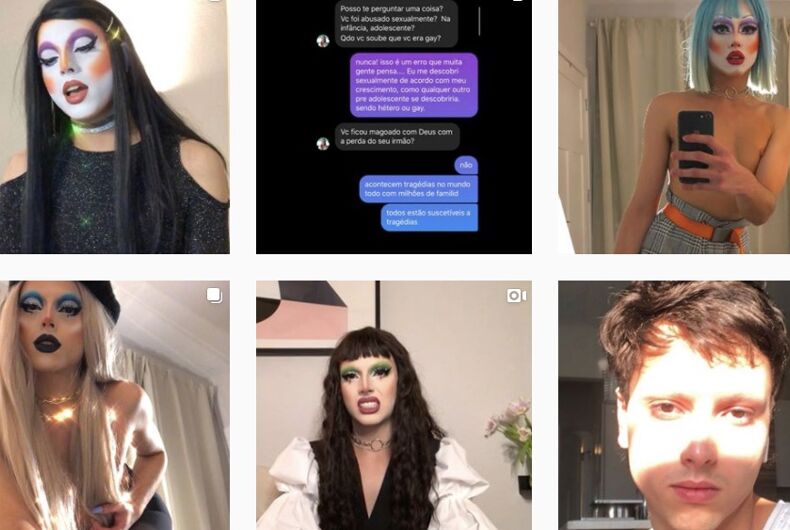 To say that Lucas Santos’s family is religious would be an understatement. He’s the son of Brazilian evangelical singer and pastor Eyshila and the nephew of popular and notoriously anti-LGBTQ televangelist Silas Malafaia.

In short, he’s not the first person you’d expect to come out as a singing drag queen. But that’s part of what has made his recent coming out all the more exceptional.

The 2o-year-old recently unveiled his drag persona, Peridot, on Instagram by posting a video of himself playing and singing the Lana Del Rey song “Love.” Since then, he has shared several images of Peridot with his over 147,000 followers, and he’s using the platform to educate people about what it means to be gay in a religious family.

If his drag name sounds familiar, that might be because it’s a green semi-precious birthstone for the month of August and it’s also the name of a tomboyish character on the very queer Cartoon Network series Steven Universe.

a failed ass attempt on love by lana del rey. i swear to god i tried to record this a thousand times!!! but i kept messing up :( i ended up liking this video flawed as it is

Even though Peridot has a clownish appearance, Santos isn’t just using her to clown around. Nearly 10 days after posting his original video as Peridot, Santos posted a screenshot of a follower asking, “Were you sexually abused as a child? Teenager? When did you know you were gay?”

While the idea that homosexuality is “caused” by childhood sexual abuse is an offensive and dangerous right-wing stereotype, it’s also a widespread misconception, and Santos responded gracefully by answering.

“Never!” he responded. “This is a mistake that many people think…. I discovered myself sexually according to my growth, as any other preteen would discover. Being straight or gay.”

He later explained to a follower how he squares his religious upbringing with being gay:

I am not part of any religion anymore, nor will I ever go. I believe that religions that preach absolute truth only divide and cause problems. You don’t have to be forced to be faithful to any “god” to be “saved.” But if you have Jesus as a form of refuge in the midst of pain, if you look to Jesus to do good and spread love, there is nothing wrong with that! On the contrary…

Of course I believe [in the Bible]. Historic facts are contained in it. But I do not believe that it is a 100% perfect book and that we should follow every word there without question. In the new testament, JESUS said that if you get divorced and remarry with another person, you are committing ADULTERY. What is adultery? SIN. And where are the churches falling on those who once divorced and remarried? Nobody cares, because they accepted the adaptation of the times. But when it comes to homosexuality, they use the Bible because deep down there is prejudice in their hearts.

Santos might know this prejudice most intimately from his homophobic uncle Silas Malafaia.

According to GCN, Silas has called laws against anti-LGBTQ discrimination “a blatant attack on freedom of speech.” He has said he’d like to place “10,000 gay couples on an island” so “they’ll disappear” and believes that Pride parades “mock the symbols of the Catholic church.”

However, Santos’s mother, despite being a gospel singer, says she still loves her gay son. On Instagram, Eyshila wrote:

“They are our children, not our trophies. They are ours, but they are independent beings. They are not our continuation, but they have their own history, with their choices and their experiences. Parents, love your children! Love and express it in words and attitudes. If what you give is still not enough for them for some reason, don’t blame yourself for it. Parents can only give what they have.”

According to the Brazilian LGBTQ site, Observatoriog, Lucas isn’t the first Malafaia family member to come out. In January 2020, Rodrigo Malafaia announced his engagement to his boyfriend, Leandro Buenno.