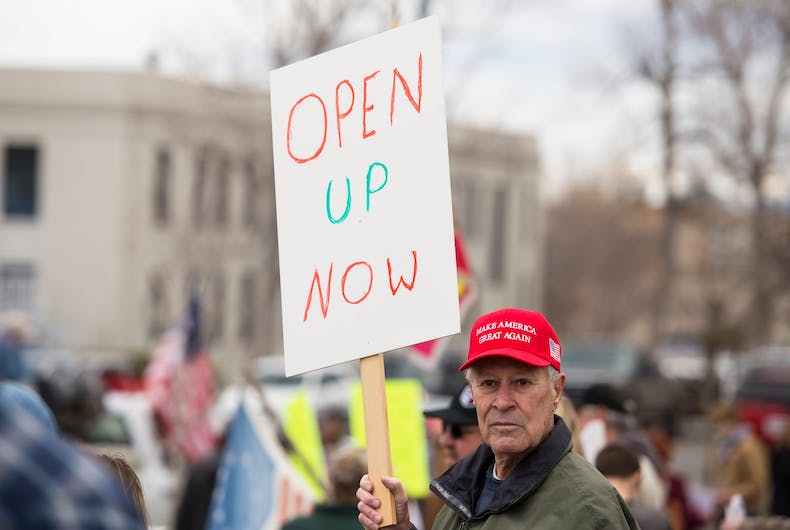 Helena, Montana - April 19, 2020: Protestor holding sign at a protest rally over the shutdown and stay at home orders due to cautions about Coronavirus.Photo: Shutterstock

A protester held a sign that said, “Arbeit Macht Frei” (German: “Work Will Set You Free”), the same phrase imposed by the Nazi command at several concentration death camps, at an angry rally against Michigan Governor Gretchen Whitmer’s “stay-at-home” order intended to help reduce the spread of the disabling and deadly Covid-19 virus.

Though the Nazis understood completely that Arbeit Macht Frei was a fiction, a lie, an ironic attempt intended to extract as much slave labor as possible out of prisoners without a care for their physical and emotional health, did this Michigan demonstrator not comprehend this historical propaganda fabrication?

Related: If we start a conspiracy theory that COVID-19 turns you gay, would Republicans stay home?

How “free” are workers at our nation’s meat processing plants, like at Tyson and Smithfield, where people are compelled to work in unsanitary and dangerously crowded conditions at or near minimum wage? Hundreds have been infected and some have succumbed to the virus.

Our nation’s lacking-in-empathy chief executive, Donald J. Trump, in addition to Republican Iowa Governor, Kim Reynolds, have issued back-to-work orders for these plants and other businesses.

Reynolds announced at a recent press conference, “If you’re an employer and you offer to bring your employee back to work and they decide not to, that’s a voluntary quit,” said Reynolds. “Therefore, they would not be eligible for the unemployment money.”

The Trump/Reynolds decrees negatively affect our country’s most marginalized and vulnerable residents: the working poor and recent immigrant groups comprising primarily people of color. They are the barely-paid labor force who must try to get by from meager paycheck to meager paycheck who must continue to work to live in a pandemic, placing their lives and those of their loved ones one in jeopardy.

Not-so-ironically as conservative politicians coerce poor people and people of color to risk their lives in the workplace with limited other options, the mostly white and largely male protesters are out in force demanding that “work will set you free.”

We are witnessing some of these right-wingers carrying antisemitic Nazi swastikas and racist Confederate flags, and Trump MAGA symbols while toting pistols and high-velocity automatic weapons of war in states with “open carry laws” to intimidate and challenge governors and legislators to open state businesses.

Trump, through a series of “liberate” tweets, encouraged protestors to ramp up their efforts to pressure politicians to reopen their states, against a backdrop of ever-increasing viral infections and COVID-19-related deaths.

In an April 17, 2020 Tweet, Trump further revved up his cult followers’ conspiratorial fears of a statewide ban on firearms, tweeting, “LIBERATE VIRGINIA, and save your great 2nd Amendment. It is under siege!”

“[T]the ultimate expression of sovereignty resides, to a large degree, in the power and the capacity to dictate who may live and who must die. Hence, to kill or to allow to live constitute the limits of sovereignty, its fundamental attributes. To exercise sovereignty is to exercise control over mortality and to define life as the deployment and manifestation of power.”

With the thousands of individual and mass shootings of four or more victims in the United States each year, men, mostly white, committed the overwhelming majority.

The Pew Research Center found that white men own over 60% of the guns in the U.S. Overall, 74% of gun owners are male and 82% are white.

It is no mere coincidence that generally women (63%) favor stricter gun control regulations more than men (45%). According to a Quinnipiac University poll of registered voters, 71% of women supported a nationwide ban on assault weapons compared with 46% of men.

Donald Trump engages in a form of necropolitics to better ensure his reelection chances. He has placed at much higher physical risk already marginalized groups–poor people, recent immigrants, incarcerated people, the elderly in care facilities, and people with underlying health conditions.

He has failed in his role to ensure a safe and organized national food chain, the manufacture of personal protective equipment and medical appliances such as ventilators, guaranteed unemployment insurance, and a staged reopening when warranted based on science and not on politics.

Actually, Trump’s entire presidency could be cataloged under the overarching concept of “necropolitics.”

If we start a conspiracy theory that COVID-19 turns you gay, would Republicans stay home?

He’s part of a famous anti-LGBTQ evangelical family. He just came out as a drag queen.