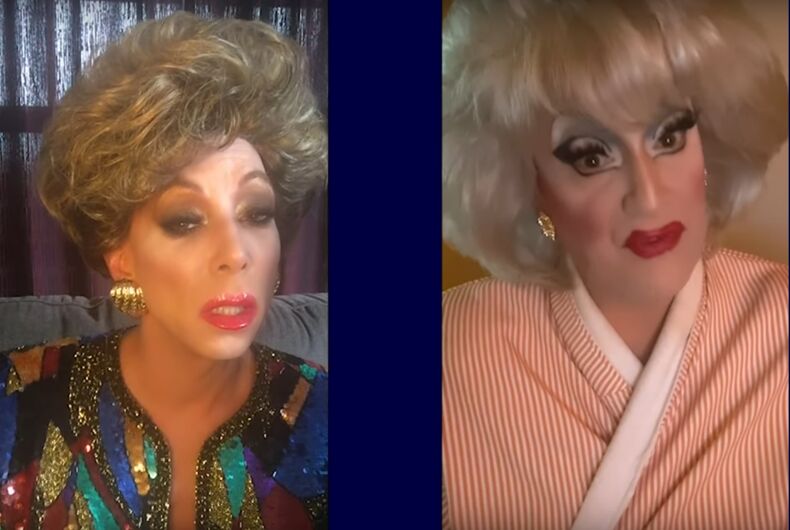 Blanche and Dorothy FaceTime while in quarantine.Photo: YouTube screenshot

Three drag queens put together a spot-on episode of Golden Girls over FaceTime to help pass the time while in self-isolation.

In the episode, Blanche Devereaux (played by the legendary Sherry Vine) really wants to get out and enjoy Spring Break in Miami, while her housemate Dorothy (Jackie Beat) tries to convince her to stay in.

Golden Girls super-fan and RuPaul’s Drag Race alum Alaska even makes a guest appearance as Rose, talking about that one time in St. Olaf when the town was put in quarantine because of a bad herring.

Just a warning: some of the humor is a bit indecent, a point brought up in the show.

“Blanche! Please! This is a family show!” Dorothy said.

“Honey, the only family watching this is a bunch of gay men,” Blanche retorted.

Performers have been hard-hit by the pandemic as shows have been canceled all over the world, and drag queens are no exception. Many have been performing online to earn tips and help make ends meet.

“I would hope they would start treating this like a grassroots campaign and maybe reach out to queens in their hometowns or where they got their starts,” D.C. drag performer Jaxknife Complex told LGBTQ Nation last month. “Maybe shed some light on lesser-established performers to help lift them up and feature new faces.”