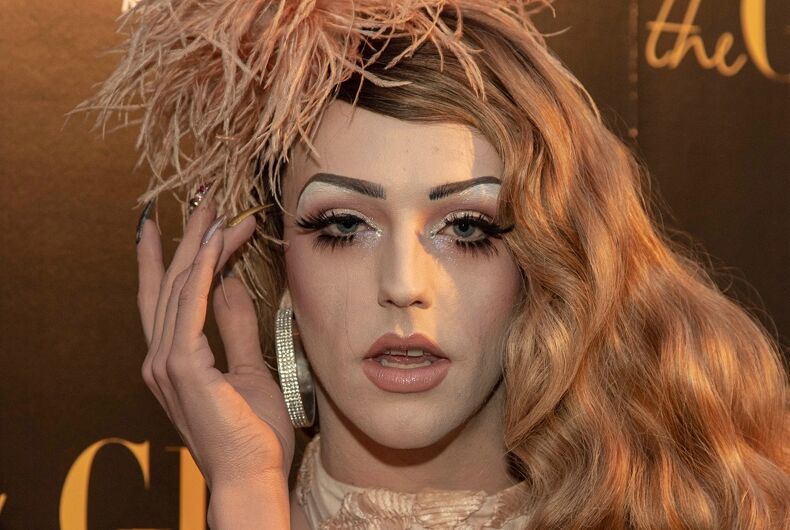 One of many communities that has not been spared the hardships we’re all facing during this time of coronavirus is the drag community. Like so many in the service and live entertainment industry, their lifeblood comes from appearances, live performances, and tips.

But, with thousands of gigs canceled, bars shuddering, Rupaul’s DragCon L.A. postponed, and some of the biggest Pride festivals axed, queens across America have increasingly turned to doing virtual shows in an attempt to make ends meet while they weather this pandemic storm.

One of those queens, Laganja Estranja, has been especially creative in her efforts. Laganja, who became a drag queen enthusiast’s household name in season 6 of RuPaul’s Drag Race, is also a famed cannabis advocate and has taken her love of weed online hosting daily 420 Live smoke sessions with her fans and cannabis enthusiasts alike.

“I’m very good at staying positive, especially during trying times and just not trying to let this stop me,” said Laganja. “With my smoke sesh, I just try to make people laugh and stay positive.”

Laganja told LGBTQ Nation that she had been following the emerging pandemic before it arrived in the United States. To prepare for what she saw as a looming storm, she began to act. Quick to point out that she’s not a “prepper,” Laganja said she just had a sense these closures would be happening.

“I’ve been following this crisis for quite some time, so I kind of had an idea that clubs were going to close, but I don’t think anyone can prepare for such an epidemic as this,” said Laganja. “So, I did the best I could. I booked as many gigs as I could before I felt like the cancellations might happen.”

From the end of February until March 17, Laganja was booked solid. But since California Gov. Gavin Newsom’s (D) state-wide shelter-in-place order, she – like many queens all over America – has gone online in the hopes of somehow replicating her in-person shows.

Together with her Instagram takeovers and endorsement opportunities, Laganja said she has been able to build a nest egg for herself that is getting her through these uncertain times.

However, for those performers without such exposure and ability to save, the move to a digital space is a means of survival for local queens – some of whom have already been streaming for a while now.

“I enjoy this whole uncharted territory, well for others it is at least. I’ve been doing this for myself for a while,” said D.C.-based queen Jaxknife Complex. “You now have the option to bring a show to you. There’s a whole new audience to express yourself to.”

Jaxknife also says they are blessed to be employed at Trade, a popular D.C. gay bar that has started a fund to support the queer artists it contracts with while they’re closed. The bar has also taken its eclectic offering of drag shows online. Less than a week after the bar announced it was closing, it hosted the first of what have become weekly live shows that feature some of the bars most beloved queens.

And, of course, digital tips are accepted.

This past Friday, Laganja joined Biqtch Puddin’s “Digital Drag Show” on the gaming platform Twitch. Fellow Drag Race alum Alaska Thunderfuck was also part of the show. Between 8,000 and 10,000 people tuned into the four-and-a-half-hour show, which featured 30 entertainers and a mix of pre-recorded and live performances.

“It was incredibly inspiring to see people, even in this horrible time, would donate $1, $10, $40 to the queens. It also really speaks to the LGBTQ community,” said Laganja. “We have survived epidemics before. It just goes to show you that the community I’m a part of is resilient.”

While the “Digital Drag Show” reached thousands, thanks in part to the big names it featured, Jaxknife suggested that more established queens might consider using their celebrity to help lesser-known queens.

“I would hope they would start treating this like a grassroots campaign and maybe reach out to queens in their hometowns or where they got their starts. Maybe shed some light on lesser-established performers to help lift them up and feature new faces.”

We are overwhelmed by the love and support shown by our community last night. We shed some ugly tears of happiness from your love. We’ve already raised over $2600 from last night’s live stream alone. We are already distributing it. Stay tuned for more from our family. pic.twitter.com/kHLZH9vtz7

For those queens looking for ideas or inspiration for what they can do online, Laganja says you’re just going to have to get creative.

“You have to look at your skill set and decide what you can translate to an online platform that people are going to want and need during this time. Is it entertainment? Are you funny? Are you inspiring? Can you get people up and being active like I am with my dance classes. Look at what makes you as a queen special, and then take that and run with it.”

It is not clear how long this global pandemic will last, but one thing seems clear: we will be a changed community after it. And, as drag shows and other performances go online during this time, the virtual drag shows might not subside after the pandemic does.

Indeed, Laganja is already working with an agency that is planning the first-ever digital Pride festival.

“I think people are going to get really creative and start using online platforms in ways they have never done before,” said Laganja.