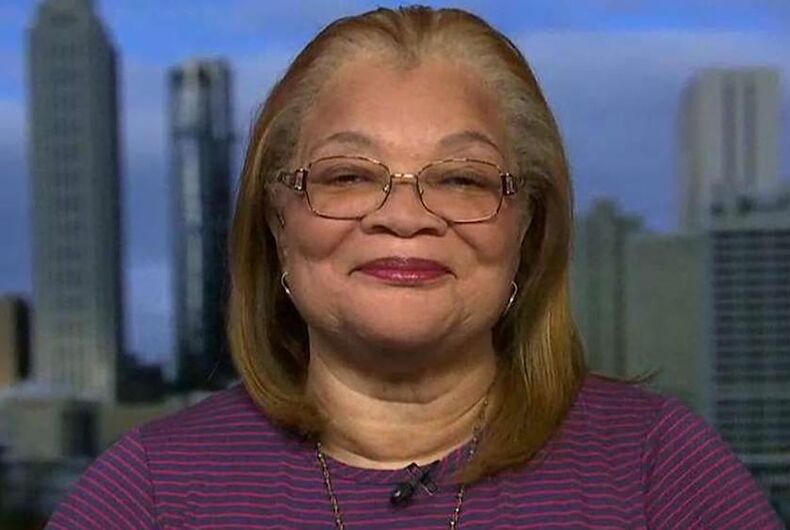 Alveda King, the right-wing niece of renowned civil rights leader Martin Luther King, recently said that she believes New York has become the epicenter for the U.S. coronavirus epidemic because it’s “the home of abortion.” Presumably, God is punishing New York for not forcing more women to give birth against their will.

King made her comment on a Wednesday night web hangout promoting “The Return,” a September 26 religious right, pre-election, pro-Trump rally in Washington, D.C.’s that King plans on attending.

As the conversation turned to New York and why it’s been hit so hard by COVID-19, King reminded listeners that Margaret Sanger, the founder of Planned Parenthood, was from New York.

“She was the founder of all this atrocity,” King said, implying that Sanger singlehandedly created or expanded abortion in the U.S., which she didn’t. King then compared Sanger to Baphomet and Moloch, two ancient evil deities who demanded child sacrifices.

Declaring that each successive generation of Christians will “have to rise up without being afraid and come against [the spilling of] the blood of the innocents here in our own nation,” King then connected New York’s coronavirus epidemic to its abortion access:

New York is having a lot of problems, but that’s the home of abortion. We have to remember that. So now, in the name of Jesus, by the power of Holy Spirit, we bind and break and cancel that spirit of abortion, that spirit of murder, the spirit of shedding of innocent blood, that includes all the other things—the sexual abuse and the manipulations of young children who are allowed to be born, the infanticide, the abortion, the genocide… God cannot close his eyes to the murder of children and putting children on the altar and the sacrifice of our own selfishness and humanism.

While she might think that abortion somehow caused coronavirus to proliferate in New York state, it could be that New York is the state with the fourth-highest U.S. population and the seventh-highest population density, meaning it packs a lot of people in a small area. Its biggest city is also an international travel hub with a widespread public transportation system, allowing the virus to spread widely and quickly.

Then again, King isn’t known for even-handed thought. In 2010, she called gay married “genocide” while speaking at a rally for the very anti-LGBTQ organization, the National Organization for Marriage. In 2012, she denounced a resolution from the National Association for the Advancement of Colored People (NAACP) for “endorsing” the gay agenda.

That same year, she claimed that her uncle Martin Luther King forced out his right-hand-man Bayard Rustin because he didn’t believe in gay civil rights, but that’s a lie. She has also said that the devil created homosexuality, that homosexuality is “unnatural,” that legalizing marriage equality leads to natural disasters, and that homosexuality is comparable to pedophilia.

In 2018, she claimed that Trump isn’t racist because she knows a black 103-year-old in America who still has to go to work every day.

Her love of Trump though goes hand-in-hand with her anti-abortion activism. During the aforementioned web hangout, she called Trump “a man that God has put his hand upon” and said that his biggest assignment of all, assigned to him by God directly, “is the life of the unborn children.”

Despite declaring himself as pro-choice two decades ago, Trump has worked hard to roll back reproductive rights in the U.S. precisely because it’s what his conservative Evangelical base wants.

He’s part of a famous anti-LGBTQ evangelical family. He just came out as a drag queen.