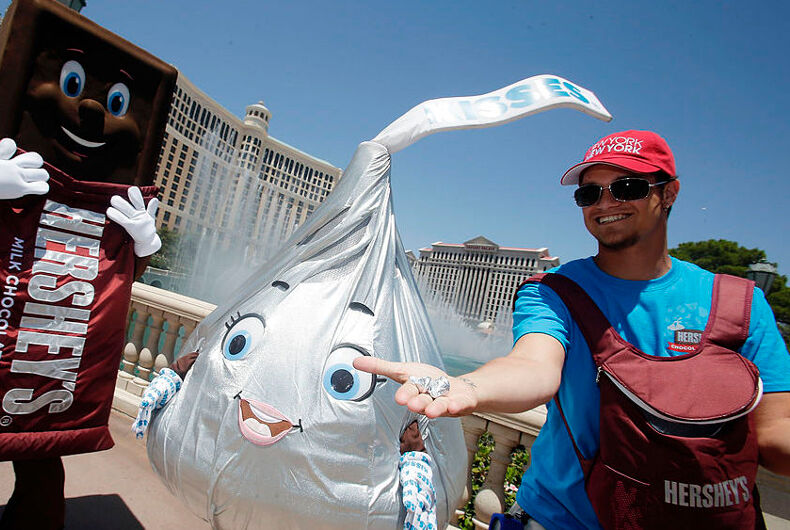 During last week’s virtual annual shareholder meeting of the Hershey Company, the food products conglomerate best known for its chocolate, an anti-LGBTQ activist asked the company’s CEO whether she would stop the company’s funding of the Human Rights Campaign, the largest LGBTQ organization in the United States.

Justin Danhof, the anti-LGBTQ general counsel of the so-called National Center for Public Policy Research and director of the Free Enterprise Project, said to Hershey’s CEO Michele Buck, “The HRC is perhaps the nation’s leading opponent of religious liberty. HRC threatens and organizes boycotts when states seek to enact laws protecting the right of people to act according to their faith or to use a bathroom in privacy that matches their DNA.”

To be clear, Danhof is speaking about so-called “religious freedom” laws that seek to give Christians a legal pass for discriminating against queer people under the guise of “sincerely held religious beliefs,” a position supported by the Trump administration that could allow people to turn LGBTQ citizens away from businesses, schools, and life-saving services.

His mention of bathrooms is a reference to transphobic bathroom bills that endanger trans people’s safety by allowing others to police their gender and characterizing the trans community as pedophilic sexual predators worthy of death.

“At a time when our nation needs to pull together as one to overcome the COVID-19 pandemic and reopen the economy, will you reconsider your funding of this bigoted, anti-religious organization that works to tear Americans apart?” Danhof asked.

Buck’s response was swift and decisively opposed to his hateful assertions. Buck said, “Inclusion and diversity are incredibly important values to us here at the Hershey Company… not only to our culture but also to our business.”

She mentioned that Hershey has recently recognized by Diversity Inc. as being a leader in many areas of diversity including in the LGBTQ space.

“I’m really proud of our track record in supporting the LBGT community and our employees and customers who identify with the LBGT community,” Buck continued. “We continue to be very focused on making all the best decisions we believe possible to foster inclusion and diversity across the company.”

In short, Hershey won’t be dropping its support of the HRC anytime soon under her leadership.

Experiencing a serious case of bitter grapes, Danhof called HRC “perhaps the most influential left-wing organization that most Americans have never heard of,” claiming “HRC staff spend their days trying to end religious freedom and marginalize all Americans of faith.”

“Hershey is 100 percent complicit in these vile, bigoted, and reprehensible actions. If the company had any shame, it would end its funding of this extremist organization now.”

No one at the company bothered to respond to the rant.