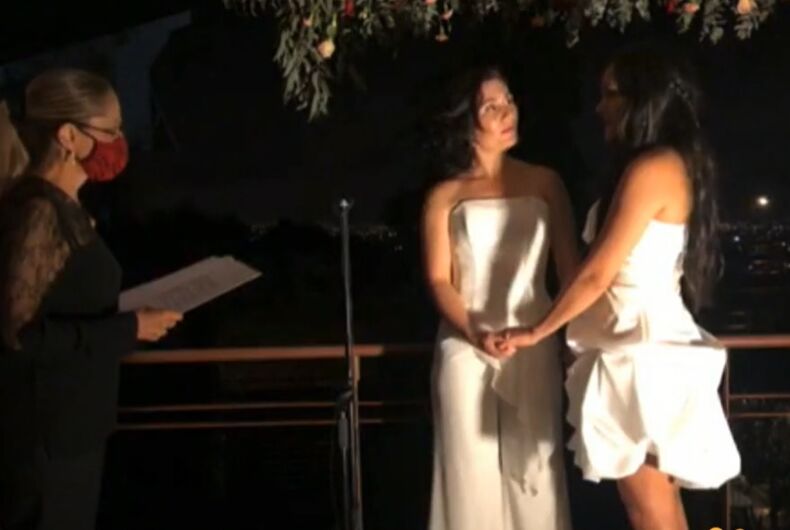 The first same-sex couple to get married in Costa Rica had a ceremony in the early hours of this morning and it was broadcast on television and on Facebook.

Daritza Araya and Alexandra Qu Castillo were the first couple to get married as a Costa Rica Supreme Court ruling went into effect, legalizing marriage equality in the Central American country, and they were married at 12:01 a.m. local time.

Respecting social distancing measures, the women were married by an officiant wearing a face mask.

“With this ring, I join you in marriage,” the women said, according to GSN. “May this ring remind you that I am always by your side in energy and love.”

Both women said “Sí, acepto” (“I do”) and they were married in the historic ceremony.

The Inter-American Court of Human Rights ruled in 2018 in favor of marriage equality, a decision that applied to the more than 20 Central and South American countries that agreed to abide by its rulings, but was not legally binding.

Later that year, Costa Rica’s supreme court decided that the country’s ban on same-sex marriage was unconstitutional and gave the legislature 18 months to implement the ruling.

But the legislature failed to act, and conservative lawmakers were attempting to delay marriage equality up until last week. They failed and the court ruling became law today.

“Costa Rica officially recognizes equal marriage,” tweeted Costa Rica’s President Carlos Alvarado Quesada. “Today we celebrate freedom, equality, and democratic institutions. May empathy and love be the compass that allows us to get ahead and build a country where all people fit.”