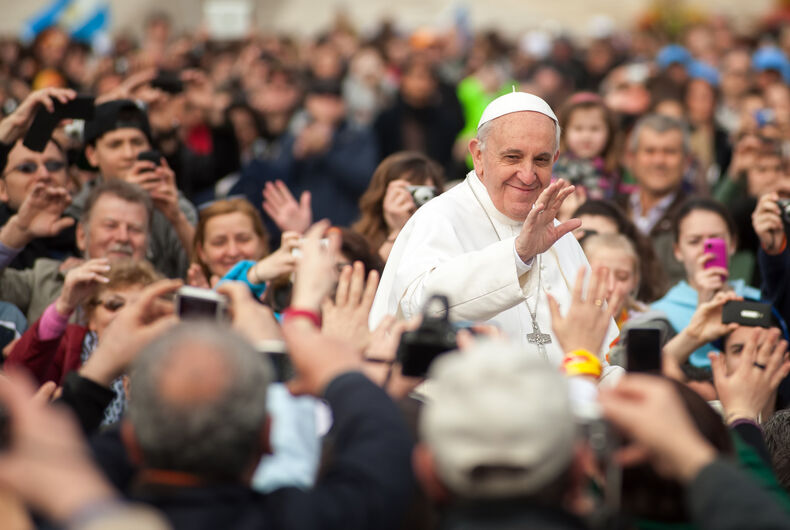 While Francis made a notable show of support for queer people by recently donating money to a group of transgender sex workers trying to survive the epidemic, Benedict gave an interview for an upcoming biographical book in which he connected same-sex marriage to the antichrist, the prophesized embodiment of worldly evil expected to try and replace Jesus Christ right before the world’s end.

Francis gave an undisclosed amount of money to a group of about 20 trans female sex workers who sought food, money, housing, and medical care from the Blessed Virgin of the Immaculate Church in Torvaianica, Italy. The donation was made through a “papal almoner,” an official who oversees Church donations, writes Them.

While some of the trans women were HIV-positive, most were 30- to 50-year-olds from Latin America and claimed that the Italian mafia had stolen their passports and money, forcing them into sex work to survive. The epidemic has made it impossible for them to work and pay rent or bills.

Though the Torvaianica church initially assisted the women, the national coronavirus shutdown has reduced the church’s congregational offerings, so its priest reached out to the Vatican when it could no longer provide the women the money they needed.

“They don’t have any resources,” said papal almoner, Cardinal Konrad Krajewski. “They went to the pastor. They could not have gone to a politician or a parliamentarian. And the pastor came to us.”

In response, the women sent an audio message to the papal almoner, stating, “Thank you so much, Pope Francis,” “May God bless you,” “Thank you for everything,” “A thousand blessings” and “May the Virgin protect you,” according to the Religious News Service.

Concurrently, Pope Francis’ predecessor former-Pope Benedict XVI (nee Ratzinger) has made headlines for an interview he gave to German journalist and biographer Peter Seewald. Seewald is writing a book about the former Pope who is now 93-years-old.

“100 years ago, everybody would have considered it to be absurd to speak of a homosexual marriage,” Ratzinger told Seewald. “Today, one is being excommunicated by society if one opposes it.”

“Modern society is in the middle of formulating an anti-Christian creed, and if one opposes it, one is being punished by society with excommunication,” Ratzinger continued. “The fear of this spiritual power of the Antichrist is then only more than natural, and it really needs the help of prayers on the part of an entire diocese and of the Universal Church in order to resist it.”

Ratzinger’s anti-gay comment underscores his steadfast opposition to same-sex marriage during his eight-year reign as pope from 2005 to 2013.

In 2010, he opposed U.K. legislation granting equal civil rights to gay, lesbian, and bisexual people, stating that it “violates natural law.” In 2012, Ratzinger launched an international offensive, requesting Catholic faith leaders to speak against same-sex marriage on all possible media platforms. He said gay marriage “threatens humanity” in his 2012 Christmas address and in his 2012 message on the Day of World Peace. He also said his biggest accomplishment was breaking up the Vatican’s secret gay lobby.

Comparatively, Pope Francis has had a seemingly warmer approach to gay people, though his record is still marked with anti-LGBTQ actions. In 2016, Francis said the Catholic Church owes an apology to gay people it has long marginalized. In 2019, he compared anti-LGBTQ leaders to Hitler and the Nazis and told a gay comedian that people who “discard” him “don’t have a human heart.”

Despite these supportive moments, Francis also personally rejected France’s gay ambassador to the Vatican in 2015 and supported a Slovakian referendum to keep same-sex couples from being able to marry or adopt kids. Also, in 2014 he invited Tony Perkins, president of anti-gay hate group the Family Research Council, to open an anti-marriage equality rally.

Pope Francis also accused trans people of trying to “cancel out” the differences between men and women, and said he opposes teaching school students about the existence of LGBTQ people.