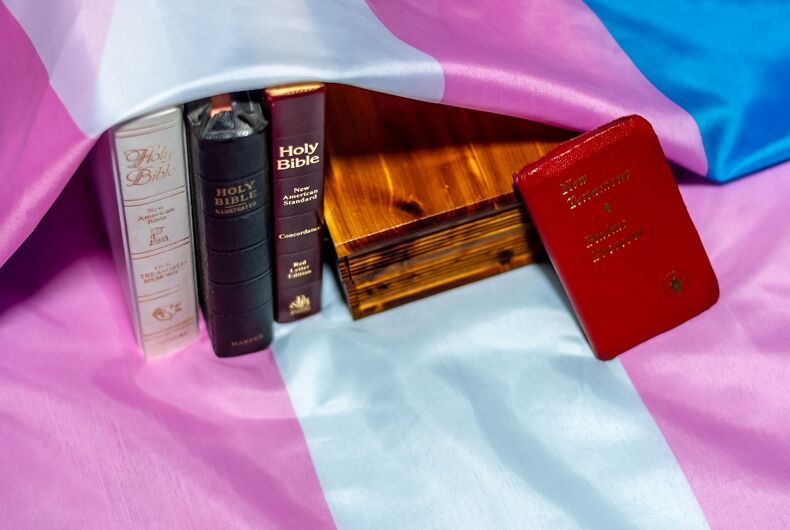 The Vatican has released guidance for schools teaching about gender identity.

The guidance, entitled “Male and Female He Created Them,” was released by the Congregation for Catholic Education and is not signed by the Pope, but it quotes the Bible and the Pope.

The 31-page booklet says that there is an “educational crisis” that will “annihilate the concept of nature” and is “eliminating the anthropological basis of the family.”

“The Holy Scripture reveals the wisdom of the Creator’s design, which has assigned as a task to man his body, his masculinity and femininity,” the booklet says. It says that being transgender is “often founded on nothing more than a confused concept of freedom in the realm of feelings and wants.”

The booklet says that gender identity isn’t based on one’s identity, but instead is always tied to a person’s sex assigned at birth.

“It is from [their] sex that the human person receives the characteristics which, on the biological, psychological and spiritual levels, make that person a man or a woman,” it says.

The document calls on schools to respect “the family’s culture” when it comes to gender identity issues, possibly a reference to schools teaching kids not to bully LGBTQ classmates.

The booklet also attacks LGB people. A Vatican press release says that the booklet stresses that “children have the right to a mother and a father, and that it is within the family that children can learn to recognize the beauty of sexual difference.”

The document will “confuse those who sincerely struggle with questions of gender identity and sexual orientation,” said Francis DeBernardo of the LGBTQ Catholic organization New Ways Ministry.

He stressed that trans people don’t “choose their gender,” instead they experience a gender.

“Too often LGBTIQ people have been, and continue to be, subjected to violence and persecution, harmful and ineffective ‘conversion therapies,’ and have their very basic human rights denied in the name of religion, so-called morality, or other traditional religious values, inciting acts of violence and hate towards LGBTIQ people,” said Jessica Stern of OutRight Action International.

“The timing of this move by the Vatican, amid Pride month, when LGBTIQ movements around the world celebrate progress and our resilience is despicable. This document is the antithesis of Pride. It perpetuates misinformation, and fuels hate.”

YouTube’s CEO issued a non-apology to LGBTQ people. It didn’t go over well.