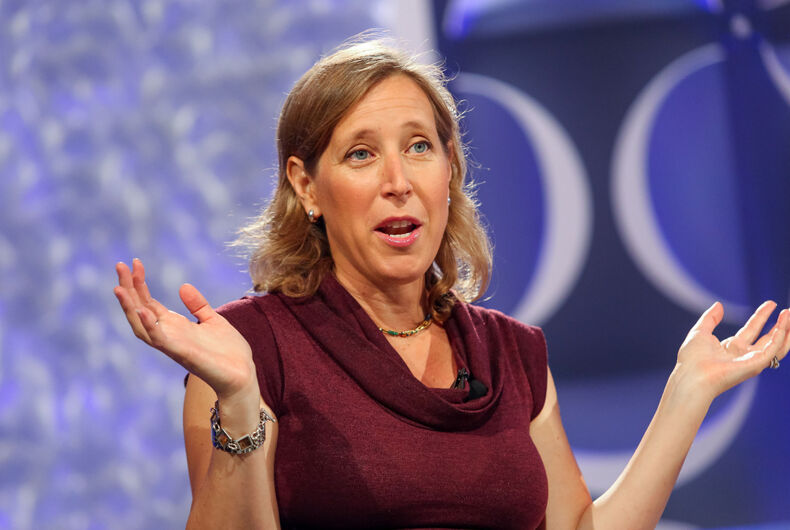 YouTube’s CEO Susan Wojcicki offered a non-apology to LGBTQ people who have experienced harassment and hate speech on the video-sharing platform in the wake of attention being drawn to Steven Crowder’s hate speech.

Rightwing vlogger Steven Crowder has repeatedly targeted gay latino journalist Carlos Maza of Vox with homophobic hate speech. Maza put together a compilation of some of Crowder’s recent attacks that drew a lot of attention two weeks ago on Twitter:

Since I started working at Vox, Steven Crowder has been making video after video "debunking" Strikethrough. Every single video has included repeated, overt attacks on my sexual orientation and ethnicity. Here's a sample: pic.twitter.com/UReCcQ2Elj

He also pointed out that Crowder was selling T-shirts that called Maza a “f*g.”

This is what happens when @YouTube doesn't enforce its anti-harassment and anti-hate speech policies.

Victims are forced to speak out on their own, opening them up to an avalanche of additional abuse. https://t.co/wVySqkLxZ0

YouTube’s response was to say that Crowder wasn’t violating any of their policies. Crowder was just expressing his opinion, even if his opinion is that Maza is “an angry little queer.”

(3/4) As an open platform, it’s crucial for us to allow everyone–from creators to journalists to late-night TV hosts–to express their opinions w/in the scope of our policies. Opinions can be deeply offensive, but if they don’t violate our policies, they’ll remain on our site.

He also said that the harassment had led to his inboxes being flooded with hateful messages.

Speaking at a conference in Scottsdale, Arizona, CEO Wojcicki apologized for YouTube allowing Crowder’s hate speech on its platform.

“I know that the decisions we made was very hurtful to the LGBTQ community and that wasn’t our intention at all,” she said. “That was not our intention, and we were really sorry about that, and I do want to explain why we made the decision we did.”

She was pushed on the apology by journalist Ina Fried of Axios, who said that it’s strange that Wojcicki is apologizing when she was involved in YouTube’s decision to leave Crowder’s content up and she still says she believes that was the right decision.

“Are you really sorry for anything that happened to the LGBTQ community?” she asked. “Or are you just sorry they were offended?”

She then went hard into some “But I’m an ally!” whining.

“YouTube has always been a home of so many LGBTQ creators, and that’s why it was so emotional. Even though it was a hard decision, it was harder that it came from us — because it was such an important home. And even though we made this decision[…] we have so many people from the LGBTQ community. We’ve always wanted to support the community openly.”

She said that as a corporation YouTube wants “to support this community.”

Wojcicki then implied that the real issue is that YouTube has so much hate speech on it that if they took down Crowder’s videos then they would have to take down a lot of videos.

“It’s just from a policy standpoint we need to be consistent — if we took down that content, there would be so much other content that we need to take down.”

If you don't regulate hate speech and harassment, you haven't actually created a "home" for queer people.

You've created a place where queer people have to pay an extra price — tolerating abuse — just to speak up. https://t.co/Spt5G2BndB

.@YouTube loves gay people when we’re dancing in their Pride videos or feuding with each other over makeup.

But if we want to talk about politics or philosophy or anything interesting, YouTube says we should expect to be harassed.

Always surprising when bazillionaire ceos are SOOO bad at bullshitting 🙄

"If we ban one Nazi, then we'd have to ban all the Nazis. Obviously, we don't want to lose all that engagement."

What a garbage answer. The precedent's been set, so YouTube's CEO has set out the justification for demonizing positive lgbtq content & preserving harassment & bigotry. This will be the answer every time this happens.

This is a terrible answer. If taking down some hate speech means you have to take down other hate speech, TAKE IT ALL DOWN. There is nothing "thoughtful" about deciding what levels of hate speech to leave up.

"If we took down that content then there would be so much other content we would need to take down."

so then ban the fucking nazis susan