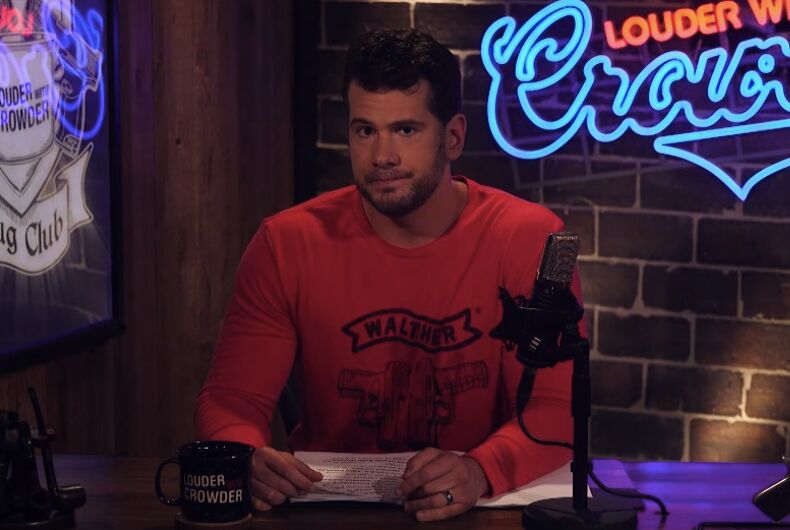 Today, YouTube basically said that homophobic hate speech targeted towards a specific individual doesn’t violate its terms of service. Its decision seemingly contradicts its own policies and supposed support of LGBTQ content creators. Also today, YouTube announced its plan to remove Nazis, Holocaust deniers and other extremists from its platform, but even its guidelines on that seem a little unclear.

The video sharing platform came under increased scrutiny this week after gay Latinx Vox journalist Carlos Maza posted a viral Twitter thread blasting YouTube for ignoring his two years worth of targeted homophobic harassment at the hands of right-wing vlogger Steven Crowder, host of the web-show Louder with Crowder.

Anytime Maza posts one of his Vox videos critiquing conservative media, political news coverage and social media abuse, Crowder will comment on it in a video of his own and insult Maza in the process.

Among Crowder’s many insults, he imitates Maza as having an effeminate voice and has called Maza a “lispy sprite,” “an angry little queer,” or the “gay Latino from Vox.” He also said that Maza eats a lot of d*cks and “sashays to his next Pride parade.”

Crowder also uses his videos to sell a shirt with a drawing of a limp-wristed Che Guevara and the words “Socialism Is For F*gs” with a small silhouette of a fig branch replacing the letter “a.” Crowder says the shirt’s message is “Socialism is for figs” (which makes no sense).

In addition to Crowder’s insults, Crowder’s fans have doxxed Maza, flooded his personal phone with messages and regularly send him threatening hate mail.

In Maza’s tweet thread, he wrote, “@YouTube isn’t going to do anything, because YouTube does not give a f*ck about queer creators. It cares about ‘engagement,’ and homophobic/racist harassment is VERY ‘engaging.'”

After his thread went viral, YouTube told Maza that it would investigate Crowder. Crowder then released several follow-up videos claiming that Vox (rather than Maza) was trying to get his “independent” channel shut down — this is untrue as Vox itself had made no move to affect Crowder’s YouTube channel at the time. Crowder also published a sarcastic apology to Maza in which he repeated all of his insults over again in a long list.

“Our teams spent the last few days conducting an in-depth review of the videos flagged to us, and while we found language that was clearly hurtful, the videos as posted don’t violate our policies…. As an open platform, it’s crucial for us to allow everyone – from creators to journalists to late-night TV hosts–to express their opinions w/in the scope of our policies. Opinions can be deeply offensive, but if they don’t violate our policies, they’ll remain on our site. Even if a video remains on our site, it doesn’t mean we endorse/support that viewpoint.”

The company added, “There are other aspects of the channel that we’re still evaluating – we’ll be in touch with any further updates.” Later on, YouTube said that it would demonitize Crowder’s videos unless he removed links selling his “Socialism is for F*gs” t-shirt.

YouTube’s own policies prohibit “content that is deliberately posted in order to humiliate someone,” “content that makes hurtful and negative personal comments/videos about another person,” and “hate speech … promoting violence or hatred against individuals … based on … sexual orientation” as well as “stereotypes that incite or promote hatred.”

Vox Media has since issued a statement which reads (in part):

The platform and the system now appears to be broken in some ways that we can’t tolerate. By refusing to take a stand on hate speech, they allow the worst of their communities to hide behind cries of “free speech” and “fake news” all while increasingly targeting people with the most offensive and odious harassment….

YouTube knows this is a problem – it’s developed anti-harassment policies to hold its creators accountable and remove them from the platform when they are in violation. Yet YouTube is not enforcing the policies and are not removing known and identified users who employ hate speech tactics. By tacitly looking the other way, it encourages this behavior and contributes to a society more divided and more radicalized.

This all comes on the heels of YouTube’s decision today to remove “videos alleging that a group is superior in order to justify discrimination, segregation or exclusion based on qualities like age, gender, race, caste, religion, sexual orientation or veteran status.” This would include white supremacist, Nazi and other racist content.

The kind of content that will be prohibited under YouTube’s new hate speech policies include videos that claim Jews secretly control the world, those that say women are intellectually inferior to men and therefore should be denied certain rights, or that suggest that the white race is superior to another race, a YouTube spokesman said.

Channels that post some hateful content, but that do not violate YouTube’s rules with the majority of their videos, may receive strikes under YouTube’s three-strike enforcement system, but would not be immediately banned.

The company also said that channels that “repeatedly brush up against our hate speech policies,” but don’t violate them outright, would be removed from YouTube’s advertising program, which allows channel owners to share in the advertising revenue their videos generate.

This move comes after years of people criticizing YouTube for a proliferation of far-right content that radicalizes viewers into racist, misogynist and queerphobic enclaves.

Last year, YouTube released a Pride video praising its LGBTQ content creators. It was released at a time when the video sharing platform was busy displaying anti-LGBTQ advertisements before videos of LGBTQ creators and de-monetizing the videos of LGBTQ vloggers.