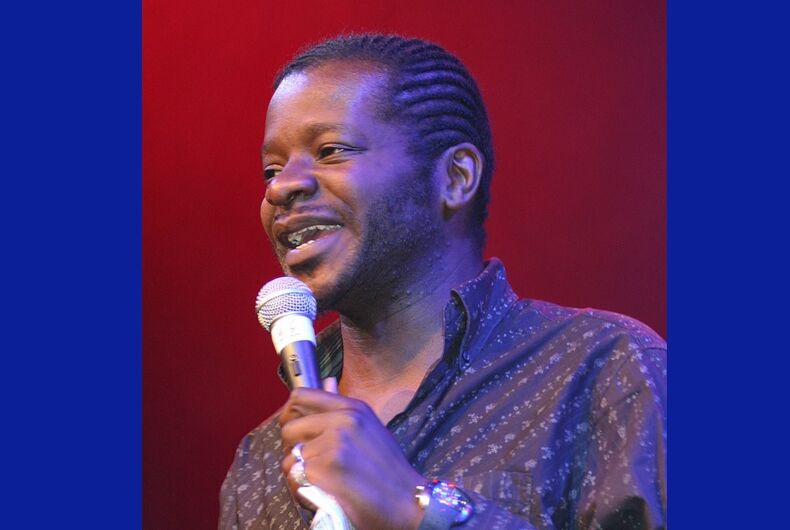 Pope Francis had some positive words about LGBTQ people when he met a British comedian.

Stephen K. Amos is a stand-up comedian who is taking part in a reality show, Pilgrimage: The Road to Rome, where eight celebrities follow part of a pilgrimage route from Canterbury to Rome.

The show, which airs this month, was filmed last September, and the participants got to meet the pope in the final episode.

Amos is gay and he decided to bring up his identity with the pope.

Related: Pope Francis is giving anti-LGBTQ conservatives all the ammo they need

Pope Francis responded: “Giving more importance to the adjective rather than the noun, this is not good. We are all human beings and have dignity. It does not matter who you are or how you live your life, you do not lose your dignity.”

“There are people that prefer to select or discard people because of the adjective – these people don’t have a human heart.”

Amos said in an interview that he at first said he didn’t want to meet the pope.

“I’ve been quite vocal in my criticism in certain aspects of the Catholic Church,” Amos told iNews.

“I thought a private audience meant you go and see him, he blesses you and you leave. I couldn’t in all conscience go and do that, it’s not me.”

When he found out that they would get to ask questions, he was on board.

“He didn’t shut anybody down, he was very clear in what we said about all being God’s children, all the things you don’t normally hear,” Amos said.

“So I was in full respect of the man. I had already planned what I would do if he had said something I didn’t agree with or that would add more shame on people’s lives, I would have respectfully excused myself. I couldn’t live with myself otherwise.”

A 15-year-old gay bullying victim died by suicide. Now the community is rallying.