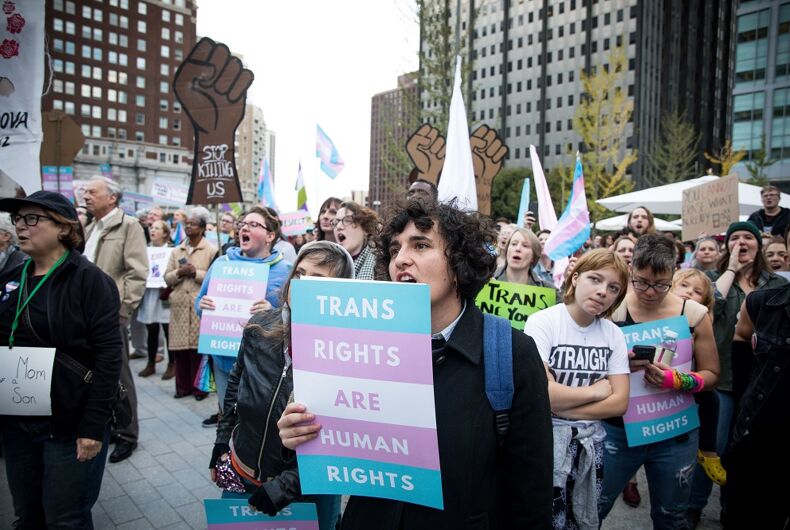 The U.K.’s Minister for Women and Equalities Liz Truss has announced a multi-pronged attack on transgender rights that could ban gender affirming health care for transgender youth.

Truss, a member of the Conservative Party, announced in a meeting with the Women and Equalities Select Committee that she would be putting forth amendments for the Gender Recognition Act, the 2004 law that allows transgender people to correct their legal gender.

She said that there would be three areas of focus for the proposed amendments. One of them was a call for an end to gender affirming care for transgender people under the age of 18 to protect them “from decisions that they could make, that are irreversible in the future.”

“I believe strongly that adults should have the freedom to lead their lives as they see fit,” said Truss, “but I think it’s very important that while people are still developing their decision-making capabilities that we protect them from making those irreversible decisions.”

This affects puberty blockers and access to hormones, because gender confirmation surgery already isn’t provided for people under 18 by the U.K.’s National Health Service.

Puberty blockers delay certain irreversible changes to transgender people’s bodies so that they can either better understand what they want to do or avoid dysphoric feelings that come with going through puberty and developing secondary sex characteristics that don’t align with one’s gender identity.

They have been shown to lower the lifelong risk of suicidal thoughts among transgender people who wanted them as teens. But in order for them to be effective, they have to be taken before the onset of puberty. That is, well before the age of 18.

Laura Russell of the LGBTQ organization Stonewall said that they’re “concerned” with the minister’s comments.

“We’d welcome an opportunity to discuss this with the Minister, as it’s crucial all young people who are questioning their gender identity are able to access high-quality, timely support,” she said. “Every trans young person should be given the care they need, in an informed and supportive manner, so they’re able to lead a happy, healthy life.”

“It would be an extraordinary move for the Minister for Women and Equalities to support the introduction of a new form of inequality into British medical practice,” said a spokesperson for the organization.

A U.K. transgender man who was only identified as “Alex” told iNews that starting hormones at age 16 saved his life.

“It really reduces the dysphoria and live my life. I’ve got a friend who hasn’t [got hormones], and sometimes he won’t even speak because of how high his voice is. He can’t deal with that.”

If he didn’t have access to testosterone, he said, “I would probably be suicidal. I would be in a pretty bad place.”

One of Truss’s other areas of focus for Truss was “the protection of single-sex spaces,” which she called “extremely important.”

Anti-transgender activists in the U.K. often say that transgender women are “biological males” and usually use the expression “single-sex spaces” to refer to areas where cisgender women, transgender men, and non-binary people who were assigned female at birth are allowed to enter, to the exclusion of transgender women.

Last, Truss said that the amendments would maintain “the proper checks and balances in the system” when it comes to “transgender adults” but didn’t elaborate further.

She didn’t specify a timeline for the amendments other than that a review would happen this summer.