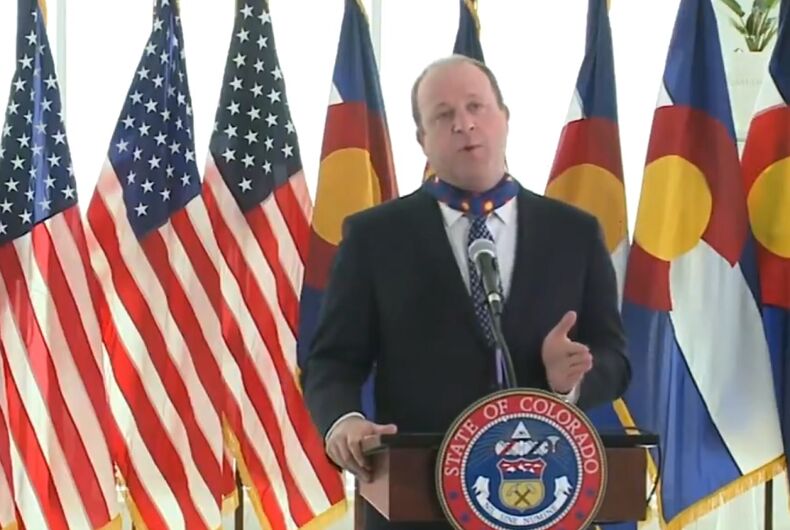 Colorado’s gay, Jewish governor got emotional when asked about a Republican politician who compared his stay-at-home order to the Gestapo.

Gov. Jared Polis (D) is Colorado’s first gay and first Jewish governor. He issued a stay-at-home order to help slow the spread of coronavirus during the global pandemic.

This upset Colorado House Minority Leader Patrick Neville (R), who said in a talk radio interview that stay-at-home orders and other measures taken by local governments are, in general, part of a “Gestapo-like mentality.”

Charles Ashby – a journalist with the Grand Junction Daily Sentinel, a local paper – told Polis that there is “a lot of rebellion out here against your orders” as well as local orders, which the journalist said have been “equated to Nazism.” The journalist didn’t mention Neville’s name.

“As a Jewish American who lost family in the Holocaust, I’m offended by any comparison to Nazism,” Polis said, getting visibly upset. “We act to save lives — the exact opposite of the slaughter of 6 million Jews and many gypsies and Catholics and gays and lesbians and Russians and so many others.”

Gov. Polis responds to accusations that his stay-at-home order is akin to Nazism: "As a Jewish-American who lost family in the Holocaust, I'm offended by any comparison to Nazism. We act to save lives; the exact opposite of the slaughter of 6 million …" (Video: @denverchannel) pic.twitter.com/nlUwrYVmJI

Neville accused Polis of trying to score points and that his comments comparing following public health guidelines to Nazism were “nothing.”

“If he’s bringing it up now it’s because he’s trying to make political hay out of something that really was nothing,” Neville said. For the record, Polis did not bring up the Nazi comparison, Ashby did, and Polis didn’t mention Neville’s name.

In the rest of his response, Polis called on Coloradoans to “act with unity.”

He stressed that spreading the virus isn’t a good way to make a political point.

Far-right politicians all over the country are denouncing stay-at-home orders as restrictions on their freedom, and many of them are bringing up Nazi comparisons.

“Hitler used essential and nonessential Jewish workers and if you were nonessential, you were put on the bus or the train,” she said, comparing the very idea of deeming food essential but wrestling non-essential to one of the greatest atrocities in history.

Scott called a local newspaper story on her comments “a hit piece” and said, “Recent analogies are poignant and relative to our times.”

The gays are werqing from home now & they’re getting creative