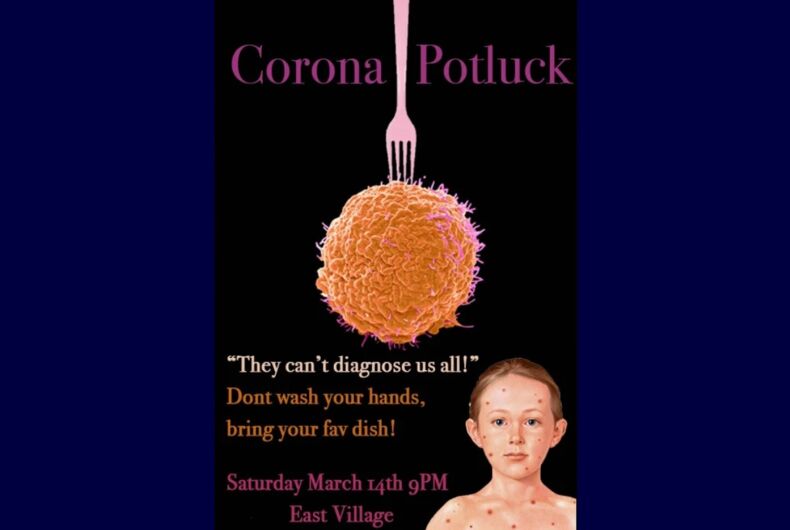 The invitation to Lucian Wintrich's "corona potluck"Photo: via NY Post

“Twink for Trump” Lucian Wintrich talked to the New York Post about a “corona potluck” – a get-together he organized where he discouraged people from washing their hands – that he organized earlier this month.

Wintrich, who parlayed his notoriety from the group Twinks for Trump into a paid gig at the far-right website Gateway Pundit, said that the idea was inspired by “chickenpox parties” – where parents take their kids to deliberately infect them with the disease.

Earlier this month, Wintrich, 31, sent an invitation to his friends for his corona potluck. Complete with images of a virus on a fork and a child with chickenpox, the invitation told attendees: “Dont [sic] wash your hands, bring your fav dish!”

“They can’t diagnose us all!” the invitation said, which is true because there was a severe shortage of coronavirus test kits earlier this month, something that Donald Trump was criticized for not addressing in his response to the global pandemic.

Wintrich said that the point of the potluck was to spread the virus to build immunity. Attendees wouldn’t develop severe cases of the disease, he claimed even though he does not have a medical background nor is he clairvoyant.

“The majority of folks I invited, if they got it, would recover fairly quickly and build up an immunity to the present form of COVID-19,” he said defiantly. “It was relatively inspired by the chickenpox parties that were all the rage in the 90s.”

Twenty people ended up attending the party at his small apartment. One attendee said that they went because something something World War II.

“When Britain was being bombed by Nazi Germany during the blitz, they kept the f**king stores open,” the anonymous attendee said, apparently not understanding the difference between bombs and an infectious disease. “People went about their lives.”

They said that coronavirus is “a flu” and that Americans “have completely handed over our civil liberties.”

“Anyone who wants to go out and live a normal life is semi-ostracized,” they added.

Brian Alacorn also went to the party, although his reasons were less political.

“I went because Lucian is my friend and he texted me,” the 24-year-old potluck-goer said. “I thought I shouldn’t, because of the social distancing. But my friends were already outside and I just kinda went.”

Wintrich is a professional troll and has been referred to as “a poor man’s Milo Yiannopoulos.” When he worked for Gateway Pundit, he attended White House press briefings and was paid a bonus for asking silly questions just to annoy other journalists, according to his boss Jim Hoft, who is also gay.

And in 2017, he faced charges connected to allegedly attacking a woman while delivering a white supremacist speech where he denounced “illegal immigrant tr***y migrants.”

Chickenpox parties were a fad in the 90s, a time when there was no vaccine for the disease and parents considered it an inevitability. The point was to get children who had the disease into contact with non-infected children to deliberately spread the disease so that they develop immunity while they’re young and have a better chance of surviving it.

But since the development of a chickenpox vaccine, the idea of a chickenpox party – or a flu party, or a measles party, or… – has become associated with the anti-vaccine movement, where parents seek to intentionally infect their children with dangerous diseases under assumption that developing immunity “naturally” is better than getting a vaccine from a doctor.

And like anti-vaccine advocates, Wintrich also believes that public health officials are exaggerating the severity of the current pandemic and that the worst will never happen to him or anyone he knows.

“The quarantine, itself, is serious to a degree,” Wintrich said. “I wouldn’t hang around folks over the age of 50 and risk infecting the more vulnerable.”