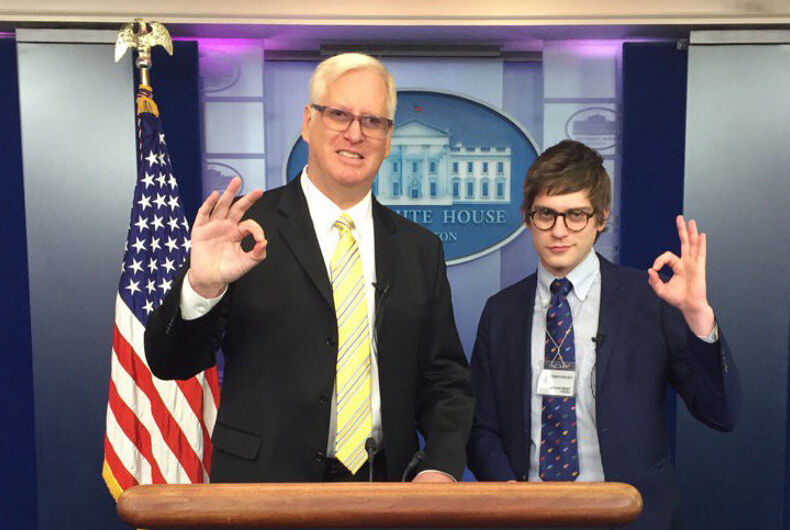 When the White House granted press credentials to the conservative website The Gateway Pundit, often labeled one of the foremost purveyors of “fake news,” even by those on the right side of the aisle, it caused many to scratch their heads.

Even more red flags were raised when Jim Hoft, who runs the site, and “Twinks4Trump” “artist” turned “journalist” Lucian Wintrich posed in front of the podium while making a “Pepe the Frog” hand gesture that many call a racist dog-whistle.

Turns out, everyone was right to worry.

The New York Times has published a lengthy article outlining the changing face of the White House press room:

“Outlets that have become newly visible under the Trump Administration include One America News Network, which was founded in 2013 as a right-wing alternative to Fox News; LifeZette, a Web tabloid founded in 2015 by Laura Ingraham, the radio commentator and Trump ally; Townhall, a conservative blog started by the Heritage Foundation; the Daily Caller, co-founded in 2010 by Tucker Carlson, now a Fox News host; and the enormously popular and openly pro-Trump Breitbart News Network. Most of the White House correspondents from these outlets are younger than thirty. ‘At best, they don’t know what they’re doing,’ a radio correspondent told me. ‘At worst, you wonder whether someone is actually feeding them softball questions.'”

The piece includes a profile of the pair from The Gateway Pundit and it confirms what many suspected: They are only there to troll actual reporters.

Hoft, who came out as gay after the Pulse shooting in Orlando, says the only reason that Wintrich, who is also openly gay, is there is to lob softball questions and annoy actual professionals doing a real job.

Over dinner at a nearby steakhouse, Hoft and Wintrich brainstormed about what they might ask the next day. “Just make sure it has ‘fake news’ in it, Lucian,” Hoft said, passing him a notepad. “Every question you ask with the words ‘fake news,’ you get a ten-dollar bonus. We’ll add that to your contract.”

Wintrich, sipping a Martini, jotted a few notes. “Sean! Over here, Sean!” he said, pretending to raise his hand. “In the past month alone, there have been at least twenty fake-news stories in the failing New York Times. Does fake news like this get in the way of the President’s ability to proceed on policy?”

Hoft cackled loudly enough to startle a woman at a nearby table. “That’s fucking hilarious,” he said. “Should we do something about ‘S.N.L.,’ maybe?”

“A follow-up, Sean, if I may?” Wintrich said. “Do you think that the failing show ‘Saturday Night Live’ will be cancelled, or can it be made great again?”

“Genius,” Hoft said. He finished his steak, ordered a slice of banana cream pie, and asked Wintrich whether he wanted another Martini. “Lucian, when we’re out together, I pay for everything. You know that, right?”

“That’s very kind of you,” Wintrich said. Andrew Marcus, the other filmmaker, said, “The big decision you have to make is how much of a troll you’re willing to be.”

“He’s there to troll,” Hoft said. For a moment, Wintrich seemed to get cold feet. “Should we have a couple of backup questions that are specifically about policy?” he asked, tentatively. “Policy schmolicy,” Hoft said.

In another example of the new guard clashing with the old, Wintrich claims to have been the victim of a homophobic attack by a Fox News reporter, although eyewitnesses dispute his version of the confrontation.

Wintrich and the reporter got into a heated argument when he denounced The Gateway Pundit for publishing racist, anti-Hispanic, and anti-Semitic articles.

Wintrich claimed Decker pushed him in the break room, and grabbed him by the arm in the press room while calling him a Nazi. He said he planned to press charges.

An article on The Gateway Pundit outlining the incident, from Wintrich’s position, suggests the outlet is looking into pursuing further legal action.

“We are currently working on our response to this attack,” the post reads. “We have been in contact with our lawyer. This behavior by a White House reporter is not acceptable. We will announce our plans this week.”