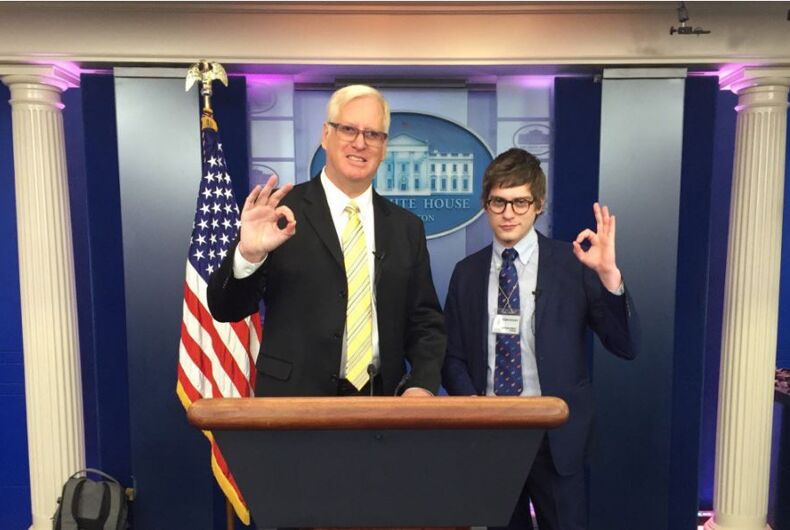 Lucian Wintrich, right, is a the creator of Twinks4Trump and a new member of the White House Press Corps.Photo: Via Instagram

Lucian Wintrich, creator of the racy photo series “Twinks4Trump” has made the unlikely jump from being a creative and political provocateur in the mold of Breitbart‘s Milo Yianoppoulos to joining the White House press corps.

The artist has only been blogging for two months and has no formal journalism experience. Wintrich started writing for conservative blog Gateway Pundit after being approached by founder Jim Hoft, also gay, in December.

Wintrich’s qualifications include starting a blog to rival his Bard College newspaper, which rejected his writings. One anonymous post on the blog referred to another student’s vagina as “cold and damp” and included a link to her Facebook page. An attorney for the college told him it could be perceived as a sexual threat, but Wintrich didn’t understand why.

He has frequently ranted against transgender people on Twitter, asking: “Can we just register ‘conservative’ as a ‘gender identity’ so libs get too confused to keep trying to argue with us?” and suggesting: “For my 2ed act: I’ll take a hormone pill & start bitching about trans rights.”

He's hitting it out of the park this week! pic.twitter.com/LVMuqjzNgL

He also called women’s suffrage “one of the country’s largest disasters.”

This is why women's suffrage was one of the country's largest disasters. pic.twitter.com/CWPMBGzTav

Wintrich said he’s not concerned about the future of gay rights under Trump.

“I have a lot of faith in the free market,” he told NBC OUT. “If you want to be a bigoted a–hole, that’s fine, but just wait to see what the market does. Obviously, it’s not a good way of running a business.”

He’s also been reassured by the president’s daughter Ivanka, who has reportedly helped hold back anti-gay administrative actions.

“I was on an email chain with Ivanka Trump, and when some of these articles would come out and say ‘Oh gay people need to worry about the Trump administration,’ she’d actually ping all of us and say, ‘Oh, this is fake news. It’s not going to happen. Don’t worry,'” Wintrich said. “And of course none of it happened.”

Wintrich said that the “liberal media” was full of bias, and that the media landscape needs “balance.”

“With the barrage of leftist media right now, you absolutely do need a conservative counterbalance and counterweight to that,” Wintrich said.

“The liberal media has largely been unchecked, and so it’s been able to grow crazier and crazier and more blatantly biased.”

But even conservative blogger Erick Ericsson called thinks it’s a bad idea. He has called Gateway Pundit a “cesspool of fake news” and said that inviting Wintrich to press briefings does “a great disservice” to the American people.

Silver: NBA will keep eye on ‘bathroom bills’ across the nation

Milo elicits ‘hissy fit’ from the right, ‘go f*ck yourself’ from the left