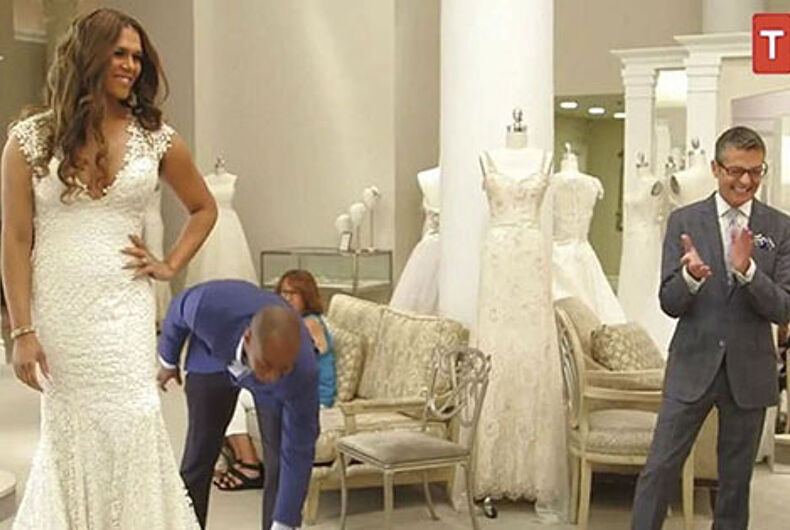 Brides, like women, come in all shapes, sizes, colors and even in the transgender variety. That’s proven in a new episode of Say Yes to the Dress, featuring Gabby Gibson and Jared Rogers, her fiancé.

She and he used the pronouns “he” and “she” previously; both Gibson and Rogers are trans.

But Gibson is not the first trans bride on the show. That honor was bestowed in January 2016 on Precious Davis. But the New Jersey couple are making history as the first trans couple featured on the bridal reality show, in which brides-to-be are shown a variety of wedding gowns and seek the approval of their friends and family.

Gibson told PinkNews being 6-foot-1, she wasn’t sure what to expect when she entered Kleinfeld, the legendary wedding dress showroom in New York City. But the hairstylist and makeup artist said the experience was “amazing! From the time I walked in to the time I said yes to the dress, I was treated with the utmost respect.”

It just felt so amazing to be treated as a bride and a human being, and not a sideshow. It’s validating to know that someone thought I was interesting enough to be a part of the show and wanted to hear my story.

Well since everyone has see the promo I guess I can share the photo of me and @randyfenoli after wrapping for @sayyes_tlc this will forever be one of the greatest moments of my life and I'm so excited for everyone to see it!!!😘😘 #blessed #mtf #transgender #klinefieldbride #sayyestothedress #thegibsons2017 #bridetobe2017 #ilovemydress #fitness #fittransgirl #fitgirlsofig #fitgirls #bridalbootcamp

The bride-to-be revealed she had undergone what some trans women call a “cupgrades” before her fitting, which made the experience all the more special: “Prior to my shopping experience I underwent breast augmentation surgery,” Gibson said, “so here I am shopping for a gown with a completely new body and not knowing what I wanted.”

The dress she said “yes” to was a Pnina Tornai satin sheath fit and flare gown with infused glitter lace overlay.

Not present for the selection was Rogers, who joined Gibson at one of Gabby’s drag shows in Atlantic City.

I thought I got out of it, not going to the original filming in NYC. So there I was being filmed and answering questions for the producer, crying like a big baby!

I’m very grateful that the producer and staff were so trans-friendly and accommodating. It’s a life experience and memory that I will cherish for a lifetime.

The episode featuring Rogers and Gibson will air on TLC March 25th at 8pm.

Did you miss the gay couple in Volvo’s latest car commercial?