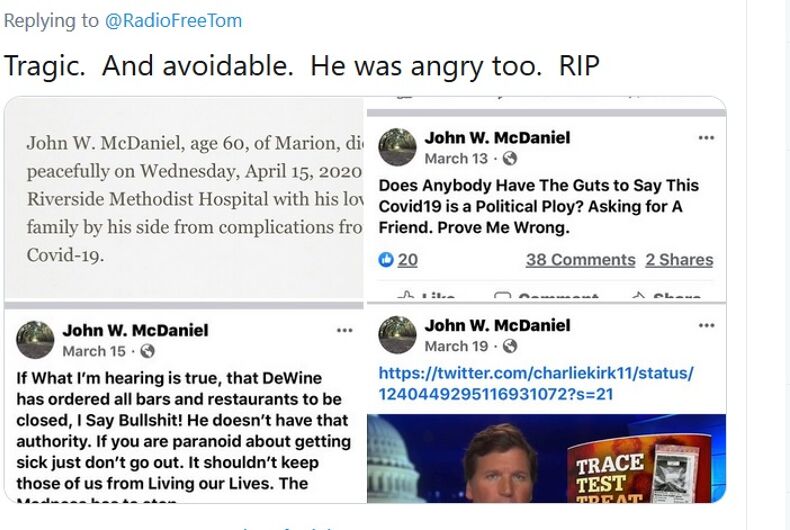 An Ohio man who called coronavirus a “political ploy” and criticized his governor for closing non-essential businesses has passed away due to complications from COVID-19.

John McDaniel, 60, of Marion, Ohio died last week, according to an obituary posted to a mortuary’s website.

McDaniel allegedly posted criticism of the response to coronavirus last month to social media. His Facebook account has already been deleted, but not before people took screenshots of his posts.

On March 12, he mocked people who were afraid of the virus, which he referred to as “Wuhan Flu”: “I’m more afraid of Spiders Than the Wuhan Flu! Truth.”

The next day, he wrote a message saying that the global pandemic was a political ploy.

“Does Anybody Have The Guts to Say This Covid19 is a Political Ploy?” he wrote. “Asking for A Friend. Prove Me Wrong.”

Two days after that, he criticized Ohio Gov. Mike DeWine (R) for attempting to reduce social interactions to slow the spread of the disease.

“If What I’m hearing is true, that DeWine has ordered all bars and restaurants to be closed, I Say Bullshit! He doesn’t have that authority. If you are paranoid about getting sick just don’t go out. It shouldn’t keep those of us from Living our Lives. The Madness has to stop.”

Tragic. And avoidable. He was angry too. RIP pic.twitter.com/tAPHZY6aq9

And the virus ended up proving him wrong. McDaniel was hospitalized at Riverside Methodist Hospital after catching the virus, where he passed away on April 15.

In his obituary, his family admonished people to stay in their cars for the funeral service, which was also live-streamed to help with social distancing.

The family “would also like to remind everyone to continue practicing social distancing to keep each other safe.”

There have been 12,516 confirmed cases of coronavirus in Ohio so far.

The gays are werqing from home now & they’re getting creative