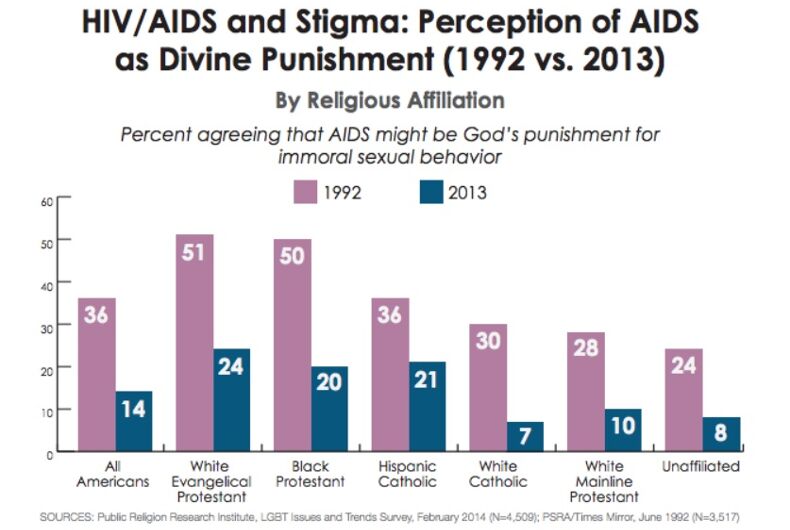 A majority of white evangelical Protestants believed that HIV was God's punishment in 1992, and too many still believe it today.Photo: Public Religion Research Institute survey

When it comes to the pandemic, I can offer two truths: we are all in this together and this will come to an end, even though we don’t know when that will be or what life will be like afterwards.

Despite those truths, religious extremists are blaming the virus – as they do with all the ills of the world – on the LGBTQ community. But if you take their own hateful rhetoric the facts actually show the reverse.

Here’s the way it almost always goes. They blame it on the San Francisco liberals. All sins start in that bastion of homosexuals.

Fundamentalists apparently consider San Francisco the capital of the LGBTQ world. This all started with the AIDS crisis when evangelicals said that God proved his anger at homosexuals by putting that plague on their capital city.

Now those conservative Christians are saying that COVID-19 is God’s revenge on a world that accepts gays.

Now let’s compare and see what God’s wrath is. San Francisco has under 1000 cases and only 12 deaths. All of the headquarters cities of the world’s major religions, religions that at one point or another have discriminated against the LGBTQ community, have more cases and more deaths than San Francisco. San Francisco is the least affected of all the cities.

As the extremists always say: God’s plagues are aimed at those who utter hate speech against their chosen followers. It turns out, in this case, the chosen people is the LGBTQ community.

And that’s not getting into how churches have become hotbeds of coronavirus transmission while some church leaders defy social distancing rules to continue holding services, with some tragic results.

I don’t take any of this lightly. We’re going through a tough time unlike any other. Times like this are times to band together.

So, to those preachers still spreading hate, I say: stop blaming people and start helping people. Your homophobic sermons only harm your followers by spreading misinformation.

The truth is, we’re all here to help one another. That’s how you get through a moment like this.

We in the gay community have understood that since day one. We know the value of working together, and we’ve seen that it works.

Those religious leaders who have proclaimed that Covid 19 is God’s punishment for homosexuality and have now been tested positive, I certainly wish them well, but it’s a convoluted way to Come Out.

Trans men who have been on testosterone can still be fertile

As coronavirus rages, gay couple gets spat on & called diseased during trip to supermarket