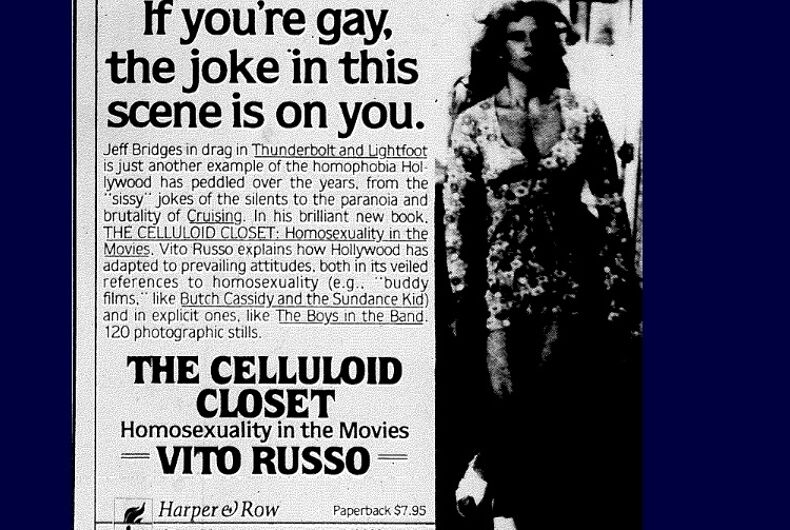 The ad for "The Celluloid Closet" as it appeared in the Advocate.Photo: Screenshot/The Advocate

My favorite Clint Eastwood movie is one of his more obscure ones: Thunderbolt and Lightfoot.

Clint is the Thunderbolt and a how-could-he-have-ever-been-that-young-and-skinny Jeff Bridges is Lightfoot.

Related: How gay Halloween became a major event in one small Indiana town in 1975

The movie was filmed in Montana and has great scenery. Paul Williams’ theme song, “Where Do We Go From Here?” wasn’t as Oscar-worthy as “Evergreen” would be, but is still damn good – and poignant.

For 9-year-old me, though, what mattered was it was the first film I ever saw in which the word “fuck” was uttered.  That came courtesy of George Kennedy. In rhyme, no less: “Go fuck a duck!”

A few of the film’s minor roles were filled by actors who were then a hair’s breadth from their moment in the sun: Vic Tayback and Beth Howland, Gary Busey, Catherine Bach, and June Fairchild. Going in the other direction was Jack Dodson.

Holding steady was Bill McKinney, most remembered for the Deliverance rape scene.  Driving a ramshackle muscle car, he picks up the titular duo as hitchhikers. For no apparent reason, his passenger seat is occupied by a caged raccoon and he has the exhaust piped into the driving compartment – which does at least partially explain why his speech is what one would envision King of  the Hill’s Boomhauer sounding like if he was on MDMA.

And it may also partly explain how those were the sane aspects of the encounter.

He begins driving erratically, veering into one ditch before crossing into the opposite one – before rolling the car.  Everyone somehow survives – including the hundred or so white rabbits that are in the trunk, which he then lets out only to have them become targets of his even more erratic use of a shotgun.

No explanation for any of it beyond the fact that this was all coming from the mind of Michael Cimino.

As for the overall plot of the Thunderbolt and Lightfoot?

It was accomplished using electronic technology that was cutting-edge for the 1960s and something that was a bit old-school: a 20mm military-grade cannon (hence Eastwood being the Thunderbolt).

They weren’t caught, but they didn’t get to spend any of the money either.  A convoluted series of events led to it disappearing.  Then the electronics expert died, with the three surviving team members eventually coming together with the much younger Lightfoot to attempt to rob the same bank in the exact same manner again.

But the passage of time allowed security technology to catch up to the robbers’ by-then-vintage electronic tricks.  Lightfoot’s role in the new affair would be as a decoy.

Which is where the LGBTQ angle of the movie begins.

Lightfoot dons a dress and long blonde wig to distract the night manager of an alarm-monitoring service. Once this is accomplished, he dashes down an alley to catch up to the getaway car, which will soon rendez-vous with Eastwood and Kennedy, who’ve done the heavy lifting of the robbery itself.

This shouldn’t be a spoiler but I apologize if it is. It’s a Clint Eastwood movie, so he’s the only one who ultimately survives and gets away. The end.

The critical event here, was Lightfoot running down the alley.

In The Celluloid Closet, Vito Russo classified Thunderbolt and Lightfoot as misogynist, which is not an unfair assessment for reasons too varied to delve into here.

He also classifies it as a homophobic “buddy” movie, overflowing with relationships that Hollywood would not allow to be portrayed as same-sex and sexual.

Also not entirely unfair, though perhaps an overplayed hand (Russo approvingly cites Peter Biskind’s characterization of the film as “Tightass and Cocksucker,” which kinda speaks for itself).  The characters Thunderbolt and Lightfoot seem far more father-son than homoerotic, though there is probably room to debate that point. As for Red Leary (Kennedy) and Goody, it is difficult to watch their personal interactions and not envision Benny Hill and the little old bald guy had their relationship been sexual, and non-comedically abusive. The gay critics seem to be on much more solid ground with them.

At least within the covers of the book.

However, it was not The Celluloid Closet’s only deployment of Thunderbolt and Lightfoot.

The book was heavily promoted within gay media by its publisher, Harper & Row.

As summer blazed in 1981 one could find an ad for it in many local community publications, including Tim Campbell’s GLC Voice in the Twin Cities.

It also appeared nationally in The Advocate.

And so, on July 23, six months into the Reagan era, on the opinion page – across from a letter from Journal of Homosexuality editor John P. DeCecco praising the magazine for, on a different matter, “entering the arena of scholarly debate” – Advocate readers were treated to a quarter-page ad that included a still image of Jeff Bridges in drag (image above).

“If you’re gay, the joke in this scene is on you,” the ad blared, wholly omitting the context of it being part of a bank robbery.  The ad further declared the scene to be “just another example of the homophobia Hollywood has peddled over the years.”

If that scene was anything, it was transphobic.  Lightfoot wasn’t a trans woman, but the scene embodies the deception trope every bit as much as Dil’s pre-revelation interactions with Fergus.

The anti-trans, not anti-gay, deception trope.

I have no idea if Russo had any role in creating the ad (my assumption is he didn’t), but his treatment of Thunderbolt and Lightfoot in the book, while a bit over the top, is arguably not transphobic. Elsewhere in the book he clearly indicates he knows the difference between homosexuality, transsexuality, and transvestism. And as the emcee of the infamous 1973 NYC Pride festival, he was at worst both-siderist as mediator between Sylvia Rivera and proto-TERF Jean O’Leary.

Yet of the hundreds of films that Russo analyzed in The Celluloid Closet, how did that one scene come to embody its entire thesis for purposes of marketing the book to a gay community that was already in the process of disappearing trans people and trans concerns both culturally and politically?

And the ad for it is still disturbing.