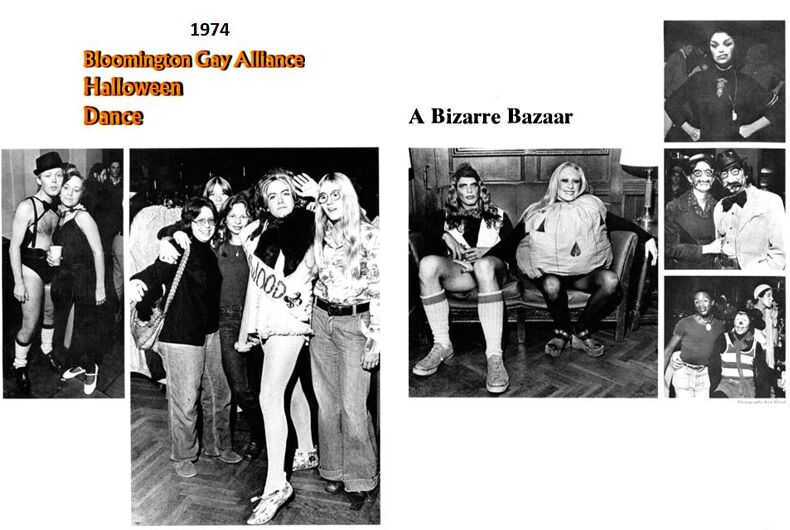 Page from a yearbook about the Halloween dancePhoto: Public Domain

When I wrote my first article about gay rights in 1970 for my Indiana college student newspaper, I knew virtually nothing about our people’s history before Stonewall because, as best as I can recall, I was still unaware of the very few gay positive books published by then and had no idea of the existence of the few gay periodicals that existed such as ONE, The Ladder, and Mattachine Review nor the groups behind them.

Even before the existence of the public internet, the grapevine said that if you were gay the best place to live in Indiana was little Bloomington because it was home to the main campus of Indiana University (IU) which made it more liberal than any other Hoosier town at the time.

Much of that first article was about Albert Kinsey’s revelations about the incidence of same-sex behavior, and Kinsey had worked at IU. Only much later did I learn of his direct effect on the gay rights movement in the U.S.

Moving there in 1973, I quickly became involved with Bloomington Gay Alliance (BGA) that had started a couple of years before as Bloomington Gay Liberation Front (BGLF); both names deriving from those of the two groups that formed in New York City after Stonewall.

At that time, BGA was the most active group in Indiana, and our first Gay Awareness Conference in 1974 featuring pioneering giants in the movement, Phyllis Lyon, Frank Kameny, and Rev. Troy Perry was the first of its kind in the state and a big success.

BGA had previously sponsored small dances on campus but attendance exploded when the dance was held on Halloween 1974. Perhaps it was the result of the positive attention the conference had received that spring, but suddenly our Halloween dances seemed to be the place to be seen for every IU student and young “townie” who wanted to be thought of as cool – regardless of where they fit on the Kinsey Scale – and exemplified college campus diversity outreach and celebration before it became a concept to which mostly lip service is still too often paid.

There’s a lot of pseudo-intellectual nonsense out there no brighter than Jack McFarland effectively claiming that no one paid any attention to Halloween before The Gays made it popular. Anyone old enough to remember the feel and smell of a commercial stiffened burlap Halloween mask from their childhood before plastic ones came along knows that’s silly.

Of course, some of the attendees at our dances were, no doubt, deeply closeted LGBs using the excuse of the event’s popularity to be around out LGBs while pretending to be straight. Perhaps even some closeted transgender people using the holiday as an excuse to dress as they really wanted to.

A connection between wearing masks and our movement history was something else I learned much later.

For those unaware, the word “Mattachine” in “Mattachine Society” – the first ongoing gay rights group in the U.S., founded in 1950, from which all since flowed in one way or another – came from co-founder Harry Hay and his research into music history for a class he taught for the Leftist People’s Education Center in Los Angeles.

Summarizing his conflated accounts of different times and groups in history, during some ancient festivals slaves and commoners were allowed to say anything they wanted to their masters while parodying them; sometimes wearing masks to minimize the chance of retribution. Later, secret all-male societies such as the Société Basoche lawyers group in France developed and they wore masks during their ritual dances. The groups were generally known as the Matassins in France, Mattaccino in Italy, and Mattachino in Spain.

Hay wrote: “The Mattachine troupes conveyed vital information to the oppressed in the countryside of 13th-15th century France, and perhaps I hoped that such a society of modern homosexual men, living in disguise in 20th century America, could do similarly for us oppressed Queers.” – Stuart Timmons, The Trouble with Harry Hay.

Behind the fun, BGA dances were conveying vital information, too, and the 1975 Halloween dance (though held one night late) was bigger still; people wearing all kinds of masks; some on the outside; some on the inside. The penalty for “sodomy” in Indiana was a minimum of two years in prison and up to fourteen years. 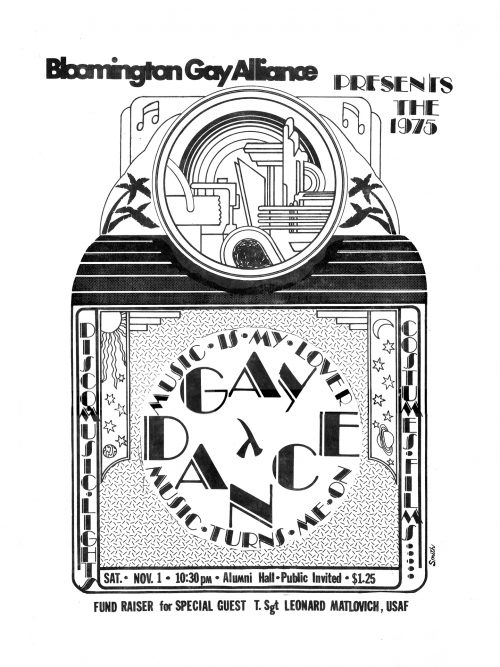 In part because it was one of the events for that year’s Gay Awareness Conference which attracted hundreds more attendees than the previous one and, as I recall, from 11 different states.

Most were probably drawn by the participation of two then-new superstars of the movement: Massachusetts state legislator Elaine Noble, the first out gay elected to major office, and Leonard Matlovich who, barely two months before, had been the first named gay person on the cover of a mainstream news magazine – Time, for outing himself to the United States Air Force to fight the ban on gays. 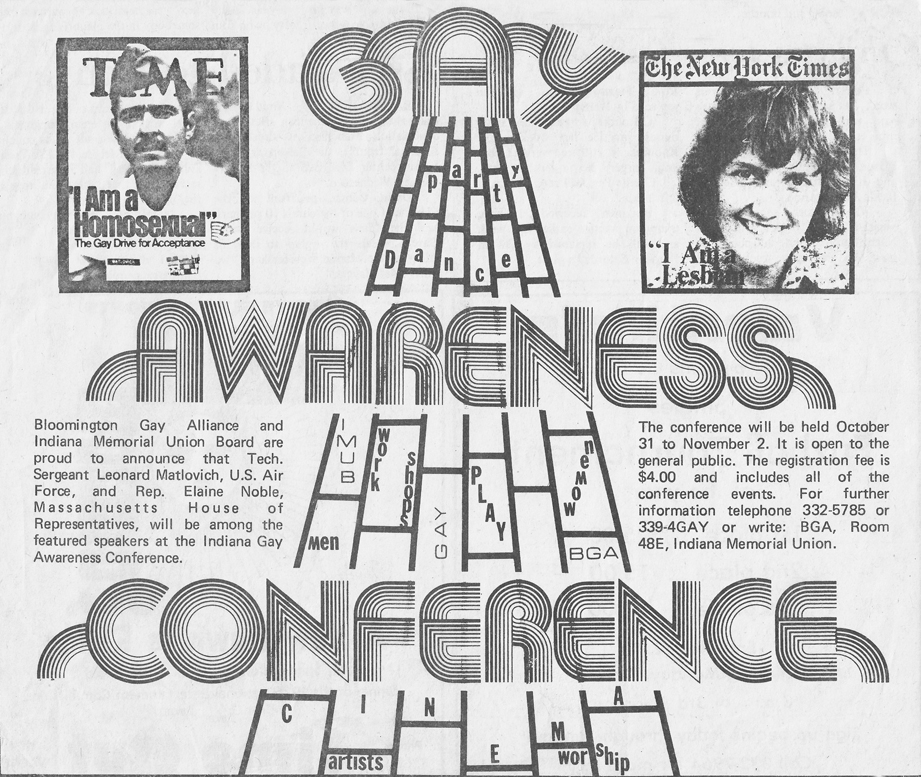 Their speeches were moving, inspiring, and resulted in standing ovations. Another hit was the “Celluloid Closet” presentation by Vito Russo on Halloween night, a lecture on how Hollywood had shaped and enflamed society’s homophobia, illustrated with multiple film clips, later a book and award-winning feature documentary but then existing only on a single 16mm reel that he understandably fiercely guarded; hand-carrying it everywhere he went. 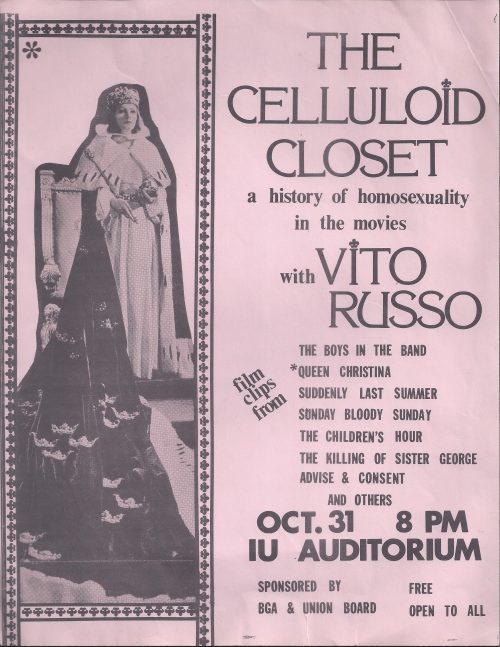 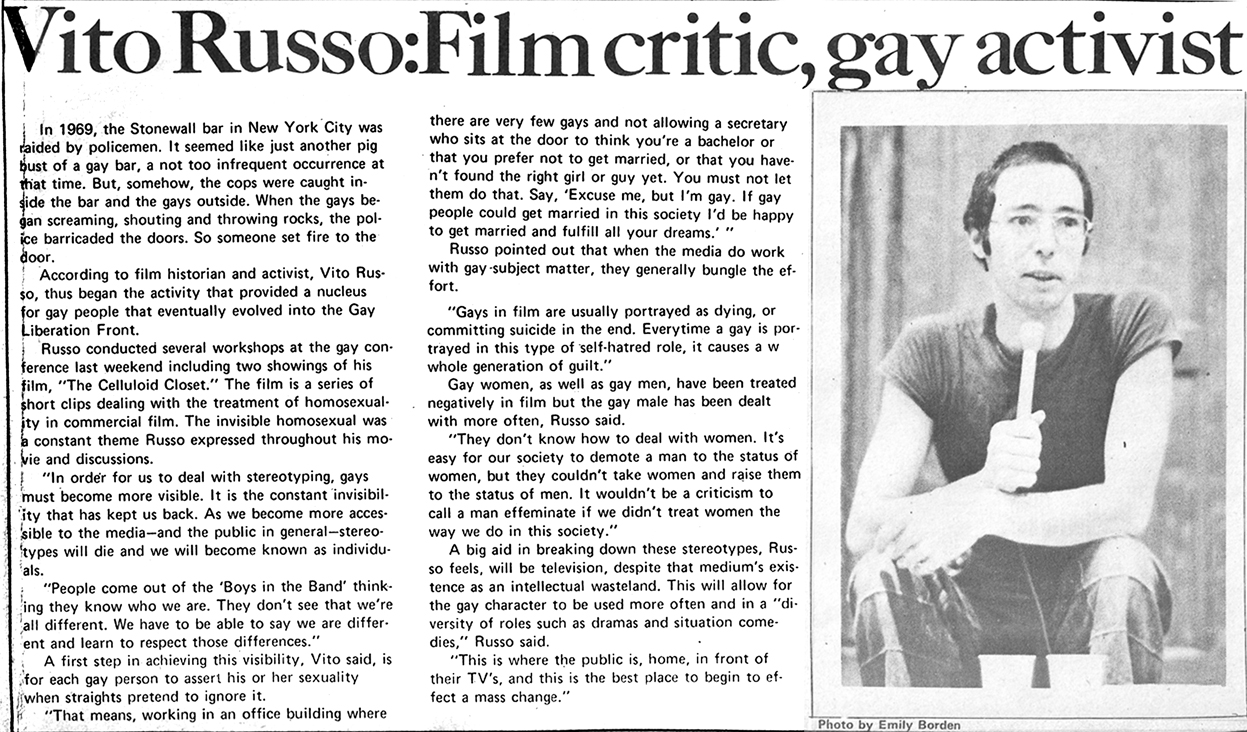 That youthful picture gives no indication of what a major figure in the movement he already was in addition to his film-as-politics expertise. That had grown out of the film nights he hosted at the Firehouse, the historic headquarters/community center of New York’s original Gay Activists Alliance with whom he’d participated in some of their legendary zaps.

Forty-four years later, his article in The Advocate about our conference from the perspective of a Stonewall witness and veteran street activist still touches me. And, in my heart I kneel down to him – he passed in 1990 and finally got his own personal documentary – and every other national leader who ever came to our little town, and to all those who ever played a role in BGLF or BGA while most were too afraid to come near us.

And to everyone who came out to dance. Happy Halloween! 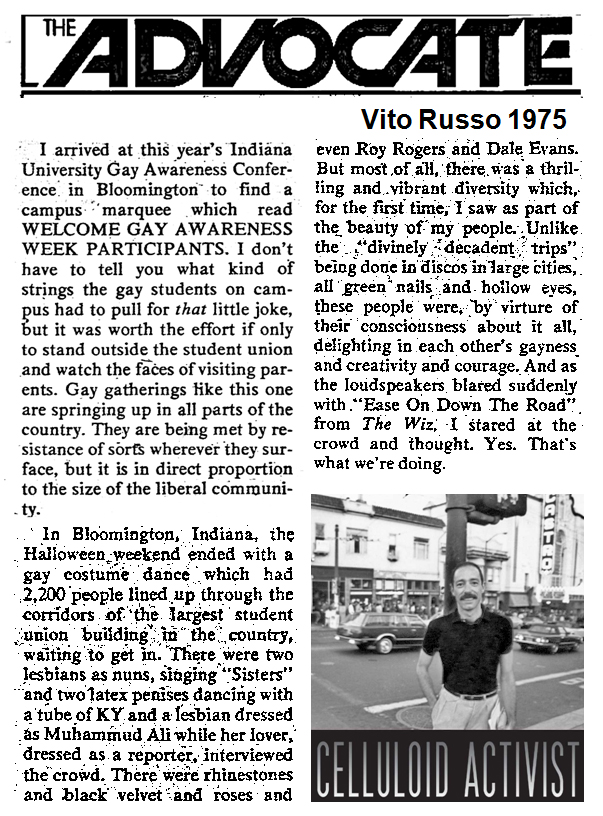