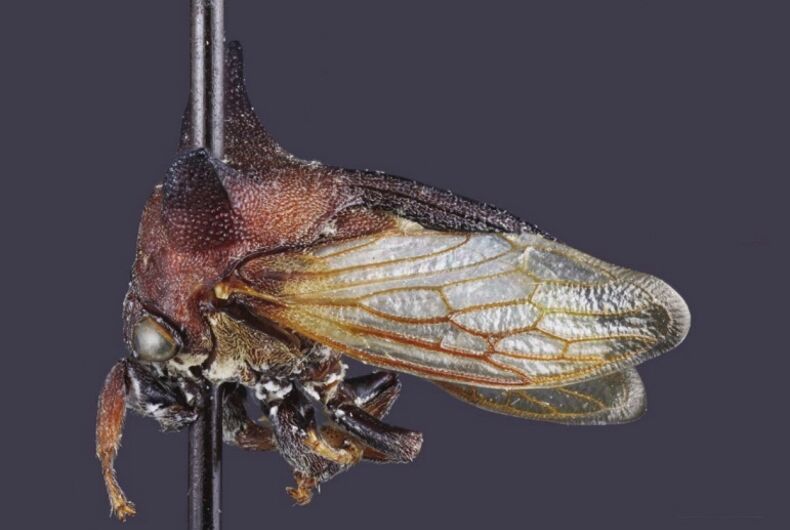 Lady Gaga has a new little monster after a small insect from Nicaragua was named in her honor.

Kaikaia gaga is a type of treehopper. The bugs are known for their bright coloring and individuality in appearance. They “sing” to each other by vibrating plant stems.

Related: A college found this Lady Gaga quote so dangerous the library had to take it down

“If there is going to be a Lady Gaga bug, it’s going to be a treehopper, because they’ve got these crazy horns, they have this wacky fashion sense about them,” Brendan Morris, a graduate student at the University of Illinois at Urbana-Champaign, said. “They’re unlike anything you’ve ever seen before.”

Morris discovered the differences between the bug and other treehoppers and was given the honor of naming the new treehopper species.

The bugs horns vary dramatically. The camouflage can look like “gnarled branches, antlers, fruiting fungi, brightly colored flags or dead plant leaves” according to the university.

“I love outrageous forms and colors,” Morris said. “It blows my mind that a group that is roughly 40 million years old has so much diversity of form – diversity, I would argue, that we don’t see in any other family of insects.”

The sample of a mature female insect is 30 years old. She was collected in a tropical forest on the Pacific coast. There are no other specimens of Kaikaia gaga.

Morris is planning a trip to Nicaragua to search the area where the sample was found to see if he can locate any living specimens for further study.

So thrilled that "my" newest baby is making headlines, she deserves all the attention! Not to shamelessly self-promote, but I really love this graphic! #Kaikaiagaga #treehoppers #bugpop https://t.co/J1eWbIhUzF

If you’re transgender, the joke in this scene is on you