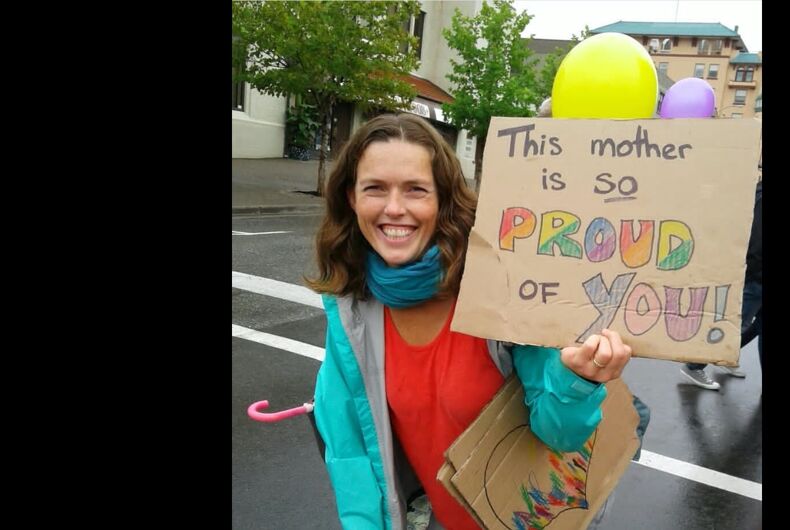 This mom is proud of youPhoto: Melissa Astra

I have a photo of a woman I look at nearly every single day. We don’t know each other, but she’s had an immeasurably positive impact on my life. I have a framed picture of her on my front table next to where I store my house keys. Her smiling face beams up at me from the home screen of my phone.

Related: ‘Straight Pride’ organizer has a gay son. She says it’s ‘typical’ for gays to hate their parents.

On a wet and windy day in 2018, I proudly marched in the Kamloops Pride Parade, stopping occasionally to take pictures of the procession as it wound its short route through the town. I’d snap a picture of an interesting sign, or a colorful person – anything that stood out to me.

I walked up to a woman with a broad smile across her face, cheering as my group went by. I stopped in front of her and asked if it was ok to take her picture. She smiled and nodded as I saw her glance over her shoulder to ensure the little ones she was with were accounted for.

She shuffled the stack of cardboard she had in her hands and tucked a little umbrella under her arm. She readjusted her grip on her homemade cardboard sign that read, “This mother is so proud of you” written in bold, colorful lettering.

I snapped the picture, said thank you and asked for a hug. She gave me a quick, tight hug and I was on my way. This simple interaction has greatly impacted my life.

My parents had a vision for what their life was going to look like, and that extended to their children too. If you were to look at their list, “heterosexual” would be listed among the top qualities. Although my parents claim to accept my sexuality, their actions tell another story.

They won’t acknowledge my relationships with women or refer to a girlfriend as such. My mother talks about my male exes because she holds out hope that I will marry a man. These hopes may seem harmless, but my parents wish for them over their child’s happiness and fulfillment.

When I was younger, I was curious and would ask questions. When I felt strongly about something I would say so. I learned quickly that these aspects of myself were not valued. Listening to others, and doing what they said was best.

The tragedy in this upbringing is that I learned to ignore the voice that tells me to follow what I know in my heart to be right.

My intuition became debilitating anxiety. I’ve gone through years of therapy to be able to hear that all too important whisper of intuition again. I’m a university graduate that moved across the country to follow their career path and yet I’ve had a hole in my heart; I’ve been missing something vital to human survival.

One therapeutic suggestion to heal an emotional wound like mine is a concept referred to as “re-parenting.” The idea is to give yourself now all the messages you needed to hear as a child. At first, it was far too emotionally taxing to directly face the lifetime of hurt and emptiness I had felt. I would try to give myself the messages I so desperately craved, but wouldn’t believe anything good I had to say about myself.

I decided to create a fictional version of the mother I needed as a child in a last-ditch attempt at self-healing. That’s when I took my beloved photo – and slowly my world began to shift.

When my mind begins to race and I’m sure something is going to go horribly wrong, I think, “What would mom say?” and bring the image of the woman into my mind’s eye.

The mother I imagine sees my untapped potential. She knows what I am capable of doing.

Every day her smile greets me and tells me I’m perfect how I am right now. Her eyes tell me there’s nothing I could do to lose her love. When I am scared she whispers in my mind, “It’s ok. You’re safe, darling. I love you.”

“Your gifts, your flaws, your everything,” she says softly in my mind. “It’s all beautiful and I love you for all of it.”

She helped me recover, accept, and reconnect with the lost parts of myself. I am a fuller version of myself because of her.

I’d love to meet “mom” again and thank her in person, but I have never put in the effort to look for her. Who she actually is – her name, her flaws, her gifts – aren’t nearly as important as the love she offered freely on the street corner.

The woman who came out to support Pride that rainy day in August helped this queer more than she may ever know. And I will always be proud of her for it.

Trump calls for Buttigieg & Klobuchar to be “impeached” over Biden endorsements