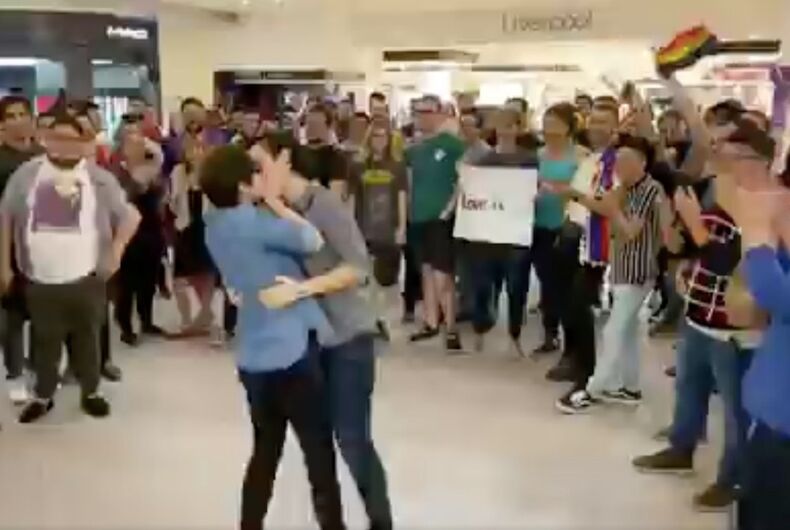 Yesterday, LGBTQ supporters held a “Besotón vs Homofobia 2020” kiss-in protest at the Galerías Monterrey mall in Monterrey, Mexico. The mall security kicked out a gay male couple for kissing in the mall plaza last Wednesday.

The kiss-in, organized by drag queen collective Regias del Drag, included a march around the mall and a rainbow flag hanging on a balcony overlooking the plaza. In the plaza, a crowd of 100 or so protestors gathered and cheered as same-sex couples kissed in front of cameras.

Related: A”bloodthirsty” mob hunted down a gay man & his brother before beating them in a mall food court

Jorge Anguiano posted about him and his boyfriend Ivan’s experience being kicked out on a Facebook video that he posted immediately after the incident last Wednesday. The couple was waiting for their film to start at the nearby movie theater before security guards approached them and told them to leave.

Anguiano’s video included footage of his conversation with the security guard and has since garnered over 43,000 views.

The Facebook event page for the Besotón vs Homofobia 2020 protest states:

It’s 2020 and there are still cases in which the guards continue to harass and intimidate gay couples for showing affection, and ask “with all due respect” to stop showing affection because their customers are “bothered.” … Every act that wants to repress us is an opportunity to make us visible and show that we are not alone.

The first constitutional article prevents any person from being discriminated against because of their sexual preference and it is time to exercise our right publicly and collectively…. Let men, women, the elderly and children see us, see that love is nothing to hide, much less that it is something that should be persecuted.

I see this woman every day. I don’t know who she is, but I know she loves me.