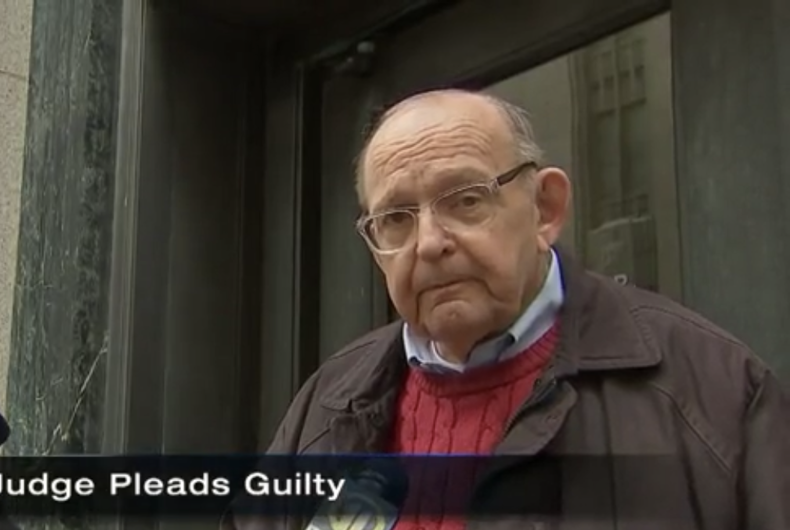 Karl Alexander has pleaded guilty in federal court to one count of making a false statement to a licensed firearms dealer. This means he admits that on September 29, 2019, he knowingly falsified a form while purchasing an assault weapon – a Ruger AR-15 rifle.

Alexander, 78, is a retired attorney and administrative law judge from Grove City, Pennsylvania. He was really purchasing the weapon for 50 year old felon Dennis Alan Riggs, who is prohibited from owning firearms due to a 1994 conviction for aggravated assault. Alexander bought the weapon for Riggs because they were romantically involved – a relationship that spans at least 18 years.

Riggs was arrested in January when his home in Troy Hill, PA was raided by the local FBI terrorism task force. They found the AR-15 in his home, along with “seven guns among portraits of Hitler, swastikas and Nazi banners.” The agents also found a video on Riggs recorded on his phone of him dressed “in Nazi clothing, making the sieg heil salute, and loading and unloading the AR-15.”

Riggs also had a video of the 2019 Christchurch massacre, and a picture of Dylann Roof, who killed 9 people in a Charleston church in 2015. FBI agents said he had contact information for Roof, who is currently imprisoned in a federal penitentiary in Terre Haute, Indiana, in his possession as well.

Authorities, such as U.S. Attorney of Western Pennsylvania Scott Brady, believe this means he was in the formulation stage of planning a mass shooting. “Riggs’ Nazi videos, photos and paraphernalia clearly show his obsession with hate-based violence…his cache of firearms clearly show his capability to act on that obsession,” Brady said after Riggs’ arrest.

“Alexander also admitted he agreed to purchase the weapon because of their personal relationship,” Brady’s office said in a statement.

In an interview with WPXI Pittsburgh’s Rick Earle, Alexander admitted that “persuasion over the years” led him to purchasing the weapon for Riggs. He claims he did not know much about Riggs’ Nazi interest because “I didn’t really see that very much in him.”

“I think he likes Germany, but I never would see him as being one who would go out and demonstrate or start any kind of riots – and certainly not to arrange to shoot someone,” Alexander claimed, but he now “deeply” regrets his decisions.

TARGET 11 EXCLUSIVE: Retired federal judge tells only Investigator Rick Earle why he purchased an AR-15 rifle for a man the feds say had an obsession with hate-based violence, and the capacity to carry it out. The EXCLUSIVE INTERVIEW only on 11 at 6pm. #wpxi pic.twitter.com/Br4S1XIngN

Alexander presided over Social Security Administration disability cases in Morgantown, West Virginia. Upon retiring in 2018, he spent his weekends at Riggs’ Pittsburgh home – that he bought for Riggs in 2002.

Alexander waited to purchased the weapon for Riggs – which the latter had “begged him” to for years – upon retiring as to “not disgrace the bench.” Riggs wrote Alexander a $789 check for him to complete the firearm purchase.

Other than his purchase, the ex-judge claims that he “had no idea how [Riggs] was involved in weaponry.”

Alexander will be sentenced in July 2020. He faces a maximum punishment up to ten years in prison, a fine of $250,000, or both, but prosecutor Jessica Smolar is expected to recommend a 2-3 year sentence.

Riggs is still awaiting trial on the weapon charges, and has not made any public statements.

Watch Alexander’s interview with WPXI and coverage of his sentencing below.

Trump & Pence may have been exposed to people with coronavirus