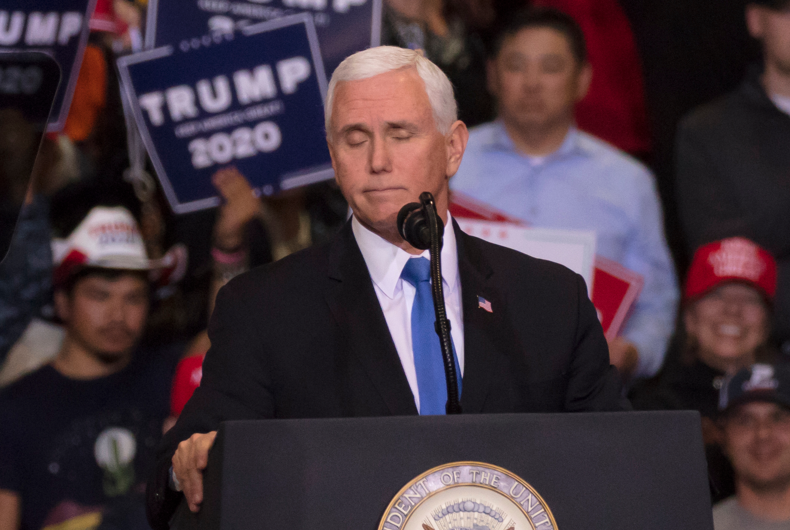 It’s been less than a month since the Coronavirus outbreak began, and Vice President Mike Pence was put in charge of managing the government’s response to it. Pence was a heavily criticized choice, mostly based on his previous management of an HIV crisis as Governor of Indiana in 2015.

Now, it’s been revealed that an attendee of last week’s Conservative Political Action Conference (CPAC) has tested positive for carrying the virus. The conference took place from February 26 to February 29 – and the President and Vice President, among other Cabinet-level and government staff, were in attendance for part of that duration.

Related: Here are tips that LGBTQ people can use to deal with the outbreak of Coronavirus

The person with Coronavirus is being treated by the state of New Jersey, and has been quarantined. The American Conservative Union (ACU), which hosts CPAC, made the announcement yesterday. In a statement, ACU said that “this attendee had no interaction with the president or the vice president and never attended the events in the main hall.”

In a statement, the White House asserts that “there is no indication that either President Trump or Vice President Pence met with or were in close proximity to the attendee. The President’s physician and United States Secret Service have been working closely with White House Staff and various agencies to ensure every precaution is taken to keep the First Family and the entire White House Complex safe and healthy.”

CPAC Chairman Matt Schlapp took to Fox & Friends this morning to say that the President nor the Vice President had contact with this person – but, Schlapp admitted that he himself had “incidental contact” with the patient, while saying he “felt healthy as a horse.”

That means it’s possible that Trump had at least second-hand exposure to the virus, because Schlapp came into contact with Trump by shaking his hand on the last day of the conference, making it very likely that Schlapp’s contact with the patient came prior to that.

CPAC chairman Matt Schlapp tells me he interacted with attendee who has tested positive for coronavirus. While the timeline is unknown, Schlapp shook Trump's hand on stage the last day of the conference. https://t.co/lR5DfHiy8c

Still, Trump has promised not to cancel any events due to the coronavirus, and said at a press briefing that he’s “not concerned at all” about contracting it.

Schlapp says he witnessed Trump wash his hands – “and I did the same, by the way.”

That’s not where the risk ends for the Trump administration – at least two attendees of the American Israel Public Affairs Committee (AIPAC) conference in Washington, D.C. were also found to have contracted coronavirus. AIPAC was from March 1 to March 3. Two cases were confirmed on Friday, with a third attendee announced today.

The two initial attendees with the virus were from New York State, where an outbreak in an Orthodox Jewish community in Westchester is ongoing. The third originated from Los Angeles.

NEW from @_DCHealth on today’s update that two @AIPAC conference attendees (who traveled to DC from New York) have tested positive for the coronavirus: pic.twitter.com/qLJNKhnVOW

CPAC was held at the Gaylord National Resort and Convention Center in National Harbor, Maryland. Governor Larry Hogan wrote in a statement that anyone who “attended or worked at the conference may be at some risk for acquiring COVID-19″ – that would include Trump, Pence, Secretary of State Mike Pompeo, and fellow Cabinet member Mike Mulvaney. Trump’s son, Donald Trump, Jr. and son-in-law, Jared Kushner were also in attendance.

“Due to the scale of this conference, we are urging attendees who are experiencing flu-like symptoms to immediately reach out to their health care provider,” he announced in a statement.

AIPAC was held at the Walter E. Washington Convention Center in Washington, D.C. The Health Department there asserts in statements that there is “no identified risk” to those who attended, but that was before the third case was announced. Attendees includes Pence, Pompeo, Senate Majority Leader Mitch McConnell, and former White House hopeful Mike Bloomberg.

Yet, Israeli attendees of AIPAC are expressing frustration and confusion over the United States’ lack of response or information for them, now that they have been exposed to the deadly virus – most have already returned back home, and have not received directions on whether to quarantine or take other precautions.

Both conferences are believed to have attracted over 10,000 people.

Someone in Trump’s administration or family being at risk for contracting the virus could put immense pressure on Pence to manage this outbreak better. Pence’s most notable mismanagement of a health issue came when he took over 5 months to approve a CDC-recommended measure that would have curb the spread of HIV in Indiana in 2015. Despite that, he claimed last week that he was still “proud of the work.”

As of March 7 at 8:45 EST, 3,491 people have died from Coronavirus worldwide. The United States’ death toll remains at 19, with 16 of those coming from Washington state.