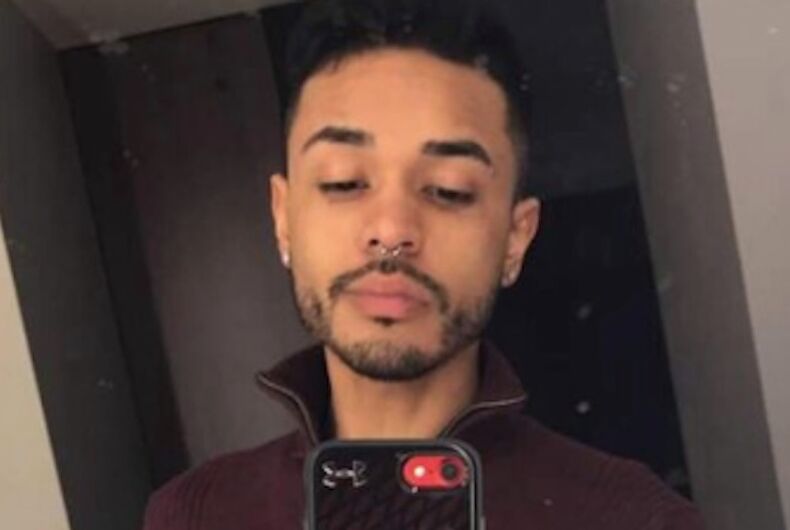 A 23-year-old bisexual man named Kenneth “Kenny” Paterimos Jr. was recently stabbed to death in Chicago, Illinois by an unnamed 30-year-old assailant who was arrested but subsequently released by police after claiming self-defense.

However, Paterimos’ 29-year-old brother, Santiago “Julian” Bueno, is speaking out, and his version of events casts doubt on the murderer’s self-defense claim. Paterimos’s family has since set up a website asking police to charge the murderer, and have launched a crowdfunding campaign to pay for Paterimos’ funeral costs.

Bueno and Paterimos went out for a drink at Richard’s Bar last Friday night. Around 11:23 p.m., a drunk patron got into an argument with Paterimos just outside of the bar and reportedly shouted a homophobic slur at Paterimos before the bouncers kicked the man out.

Later, when Paterimos went outside to smoke a cigarette, the man allegedly walked up to Paterimos with a box cutter and stabbed him eight times: once in the left ear, three times in the back of the head, twice in his right arm, once to the chest and once to the collarbone, according to Chicago Police Department spokesman Anthony Guglielmi.

Paterimos stumbled into the bar, his clothes bloodied, and fell to the floor, the color draining from his face. When the attacker tried to flee, Bueno chased him down the street and found him still carrying the boxcutter. Bueno tackled the man and slammed his shoulder to the ground when the attacker reportedly tried to stab him.

“I don’t believe for one second this guy [thought he] was ever in danger,” Bueno said. “This isn’t a story about self-defense. This is a story about someone who knew what they were doing … found his victim to bully …and then tried to walk off like nothing happened.”

Paterimos was subsequently taken to Stroger Hospital where he was pronounced dead. The Medical Examiner’s Office later ruled his death ruled a homicide.

A profile on Paterimos says he struggled with depression, “had a knack for fiesty one-liners,” “was deeply generous,” and had dreams of opening his own coffee bar and cafe.

Texas teacher suspended for being gay will donate $10,000 of legal settlement to an LGBTQ charity