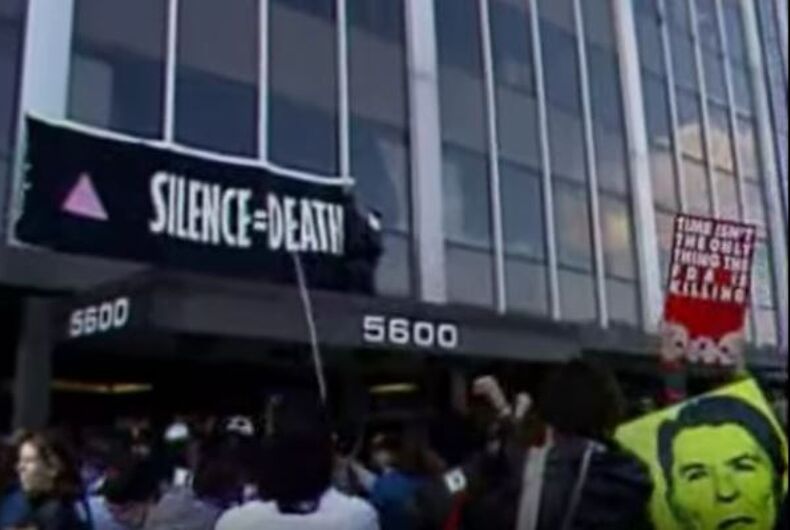 ACT UP protest at the FDA.

For anyone who lived through the start of the AIDS epidemic in the 1980s, the current coronavirus pandemic is cause for deja vu — or flashback nightmares. The rapid acceleration of an unknown pathogen through the population, the failure to minimize risk, the pervasiveness of denial were all key characteristics of the early days of the AIDS epidemic, just as they are for the COVID-19 outbreak.

The unifying thread between the two viruses is the Republican Party. In both cases, GOP leaders took a bad situation and made it worse, risking thousands of lives in the process.

Trump called the virus a hoax. The Reagan White House made HIV a joke.

At a 1982 White House press briefing, spokesman Larry Speakes laughed when a reporter asked if Reagan was aware of what people were calling “the gay plague.”

Instead of answering, Speakes took the occasion to affirm his heterosexuality. “I don’t have it, do you?” he asked the reporter. On a different occasion, Speakes jokingly questioned the reporter, Lester Kinsolving (who repeatedly pressed the issue despite his own homophobia) about his “abiding interest” in “fairies.”

Response to the coronavirus still lends itself to homophobia, though not at the same volume. But what is the same is the right’s insistence that the virus is caused by someone other than their idea of an American. This time, it’s the stupid insistence on calling the disease the “Wuhan virus,” or as Trump did, “a foreign virus,” as if a pathogen had a nationality.

It’s a classic us vs. them mentality, the same as fueled the AIDS epidemic.

Then there’s the footdragging. Reagan himself never talked about the AIDS epidemic until 1985, by which point it had killed 12,000 Americans. Reagan’s head of Health and Human Services, Margaret Heckler, kept reassuring the public that the blood supply was “100% safe for hemophiliacs… and the average citizen.”

In fact, it was anything but safe. The administration simply didn’t care about the epidemic and certainly not about the gay men AIDS was killing. There was no sense of urgency, despite warnings from public health officials that the disease was spreading.

In 1986, the National Academy of Sciences declared “this is a national health crisis . . . of a magnitude that requires presidential leadership to bring together all elements of society to deal with the problem.”

Needless to say, the leadership never came. By the time Reagan left office, more than 89,000 Americans had died from AIDS. Activism from organizations like GMHC and ACT UP exhibited more leadership than Reagan and his fellow Republicans did.

We’re seeing the same thing playing out now, but in real time and at a much more accelerated pace. Trump and his administration are asleep at the wheel. Mike Pence, whom Trump made point person on the coronavirus response, quite literally made an HIV epidemic worse when he was governor of Indiana, a time when it was far easier to stem outbreaks than the 1980s.

But if you lived through the AIDS epidemic, none of that will be a surprise. It’s just the repeat of a tragedy from a party that apparently learned nothing from the death of tens of thousands of Americans from HIV.