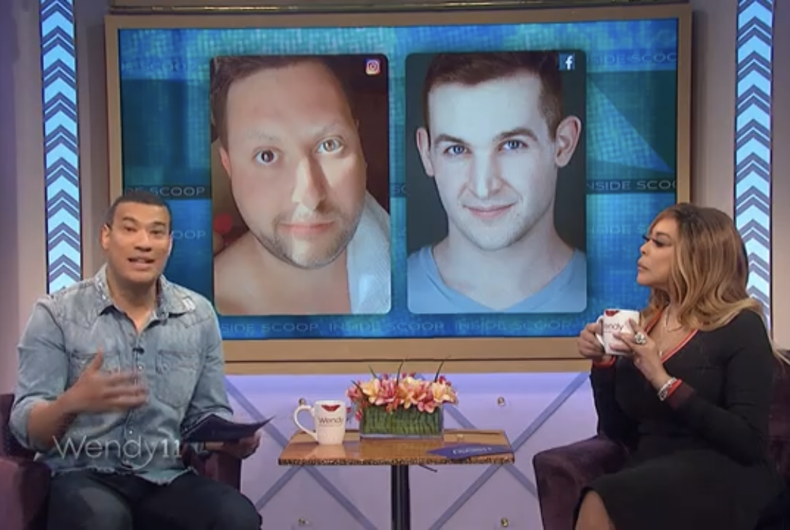 Screenshot of the segment of The Wendy Williams Show with Michael Yo, in which Ben Shimkus and Sherry Pie are discussed.Photo: Screenshot via YouTube

Ben Shimkus was the first person to reveal that he had been catfished by Sherry Pie, also known as Joey Gugliemelli, a contestant on the current season of RuPaul’s Drag Race. “I have a weird story to tell about Sherry Pie,” Shimkus opened a Facebook post with two weeks ago.

What unfolded was the uncovering of years of fraudulence and sexual misconduct allegations against Gugliemelli. It turned out that for years, he had forced people to perform sexual acts on camera in exchange for promises of acting opportunities that he could not follow through with.

Related: RuPaul’s latest scripted series ‘AJ and the Queen’ dragged to the curb by Netflix

Gugliemelli has since admitted the allegations were true and issued an apology. VH1 and World of Wonder Productions, who work to create Drag Race, announced that Sherry Pie has been disqualified from winning the show or participating in its finale.

Since the majority of the season had already been filmed, calls were made for the network to discontinue airing of the current season – but they have not been heeded. This means that every week, Sherry Pie enjoys national exposure despite his admitted abusive and predatory behavior of several men.

Instead, VH1 and World of Wonder announced in the title sequence of a recent episode that they had donated $5,000 to The Trevor Project “in light of recent developments.” The Trevor Project is a non-profit organization that works to prevent LGBTQ people from committing suicide.

“Sherry’s success will bring her more opportunities to victimize other people,” Shimkus wrote in his original Facebook post, which is available below. “…Although Sherry’s drag may be admired by our community, I hope that our community also recognizes the impact of giving her a bigger stage to broadcast from.”

I have a weird story to tell about Sherry PieRuPaul’s Drag Race Season 12 started last week. It is an exciting time in…

If that’s not difficult enough, Shimkus has now become the punchline of jokes for tabloid shows and comedians. Yesterday, Shimkus took to writing about his experience in a GayCities article.

In the clip that Shimkus refers to, comedian and personality Michael Yo discussed the controversy around Sherrie Pie in a segment of The Wendy Williams Show known as ‘Inside Scoop.’

“I mean, why didn’t these people do research?” Yo asks about the catfishing victims. “I’m not blaming them, but they’re young, the guys are young – they’re 23, 24 years old, trying to get their big break…so, man, but you have to do the research.”

Williams and Yo also giggle about the name of one of Sherry Pie’s fake movies that he pretended to cast for, “Bulk”.

In his article, Shimkus talks about how Yo told the story incorrectly in a “dismissive and vapid” segment:

When I watched this video clip of Michael Yo getting an audience to laugh at my story, I immediately became angry. With time to reflect, I am attempting to maintain moral integrity while not becoming bitter about this situation that has put me on national television, I’ve found other ways to interpret this moment.

The nine of us who came forward told flagrant accusations of sexual harassment, and when we spoke out together, it was the queer and queer ally community who believed us, and supported us.  I have received messages directly from hundreds of people, who have been so generous and shared their stories.

…We have a lot of work to do to advance our conversations around how we treat people who speak out against sexual harassment and coercion.

In response to Shimkus’ article, many in the LGBTQ community are calling for the Wendy Williams Show to be cancelled, especially on social media with the hashtag #cancelwendywilliams.

Ok, how many times is @wendywilliams allowed to be a terrible person before we stop her??? This kind of victim humiliation and shaming has to stop and Wendy has clearly proven she is NOT a friend to the LGBTQ community. #cancelwendywilliams https://t.co/BjVPGbdkl1

This comes a month after Williams had to issue an apology due to her on-air comments that gay men should “stop wearing our skirts and our heels” because they’ll “never be the women we are.”

“I don’t care if you’re gay. You don’t get a [period] every 28 days,” Williams said in the episode to massive cheers and applause. “You can do a lot that we do, but I get offended by the idea that we go through something you will never go through.”

Later that week, she begged for the LGBTQ community’s forgiveness in a tearful video posted on Twitter.

Cancel @WendyWilliams now, she has proven over and over again that she no longer deserves the platform she's been so privileged to have enjoyed these past several years. #cancelwendywilliams #Fox #Lionsgate

Since the show is on hiatus due to the Coronavirus pandemic, they have not issued a response as of yet. It is worthy to note that the show does not have a planned date to return into production.

For his part, Shimkus also made it clear in his article that he is not out to attack Yo. “I don’t wish ill will on Michael Yo,” he opined. “I hope he learns from this moment.”

The fallout from this, however, remains to be seen.

Here’s some tweets that took issue with Williams’ and Yo’s conduct:

The way that @WendyWilliams and @michaelyo conducted themselves and treated the segment about Sherry Pie on the Wendy Williams Show is disgusting. THAT behavior is partially why victims don’t come forward. Maybe instead of laughing at how the victims were taken advantage of…

Ya I made a Twitter just so I could tweet #cancelwendywilliams every day and I’ve fallen behind. But I’m still very much hoping she gets cancelled