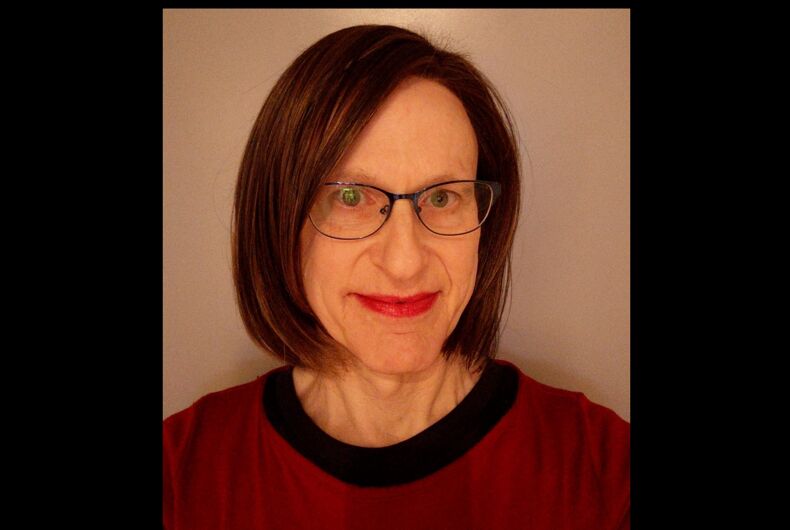 For Ginny Millas, coming out at work meant making history, opening the doors of opportunity for herself and for others.

Millas has worked as a Custody Magistrate for the Cuyahoga County Juvenile Court for the past seven years, helping thousands of families through custody battles, often involving difficult cases of abuse and neglect. She speaks of decisions to separate families gravely, preferring wherever possible to rehabilitate, assist and educate parents.

Previously, Millas has worked as a prosecutor and as a public defender, with 25 years in total spent as a public servant.

Holding the office of Domestic Relations Court judge would mean continuing to make decisions about custody, as well as divorce, intimate violence, and other domestic conflicts.

Millas also sees the judgeship as an opportunity to be a community leader who can speak to issues of injustice more broadly and affect the public’s expectations of transgender people. She hopes to clarify why for her and for so many others a transition is necessary.

She describes life before transitioning as “like being buried alive in a coffin,” a kind of suffocation with no inner peace. Something felt deeply wrong, though she couldn’t identify what it was exactly until later in life. She only knew that she hated herself, hated her body, and for some reason felt stunted in her ability to express her emotions.

Realizing that she could live as a woman “was emancipating beyond description,” and the relief she felt from hormone therapy was “stupendous.” Though her marriage ended as a result of the changes, with the work of a therapist, she’s been able to reinvent herself and find true self-love for the first time.

Still, being out in the courtroom was a terrifying concept. In many parts of the state, a gender transition on the job can even be grounds for firing. Only after four years of being out in her personal life and receiving heavy encouragement from friends did she summon the courage to break that barrier.

“You deserve to be yourself at work,” a close friend said.

“I could rationalize why our county wasn’t ready for that, and the law field was too conservative,” said Millas. “But that, that stunned me, because there wasn’t an answer for that. I realized she was right. And I created this big plan about how I would go about doing this.”

The plan involved setting up a meeting with her supervisor Judge Michael Ryan, along with representatives from Human Resources. She came out to them first, then discussed how she could best share the news with her colleagues.

The court employs thousands of people, making this no small undertaking. But her supervisor and HR representatives offered her support and encouragement far beyond what she’d expected.

“I was so impressed, he got it in such a profound way,” said Millas.

Ultimately, they crafted a letter to all the court’s employees signed by each judge, explaining her transition and notifying all that she would be presenting as female in the near future following a two-week vacation.

When Millas introduced herself to her coworkers as Ginny for the first time, she was met with flowers, cards, and an outpouring of compassion. If any colleagues did have transphobic comments, they kept them to themselves.

“The people with malice were few and far between,” said Millas.

Millas finds inspiration in her Jewish faith, likening the transgender experience to the story of Exodus. She says that escaping slavery in Egypt was only the first step and that it was followed by a long, multigenerational struggle towards the safety and security of a free nation.

“You have to go forward with courage and conviction that your voice needs to be heard, and that the outcome isn’t predetermined.”

She describes her mom as one of her strongest advocates, saying that her support has made the whole process possible. Though her father passed before she could share the news with him, she describes vivid dreams she’s had working through it with him and feels strongly about the impact that supportive parents have on their children’s lives, even into adulthood.

To be a judge would be a dream come true, and one Millas is willing to work towards for years if necessary.

“I’ll just do the best I can this cycle and observe and watch how people are doing it who have done it for over a year now,” said Millas about campaigning. “The sheer volume of people that I’ve encountered over my career is really a lot. And so if I do well, I will attribute quite a lot to just the reputation I’ve developed over the years.”

BREAKING: Satan resigns because he can’t keep up with Donald Trump

Limbaugh host: San Francisco is under lockdown because “they don’t want all the gays dropping dead”