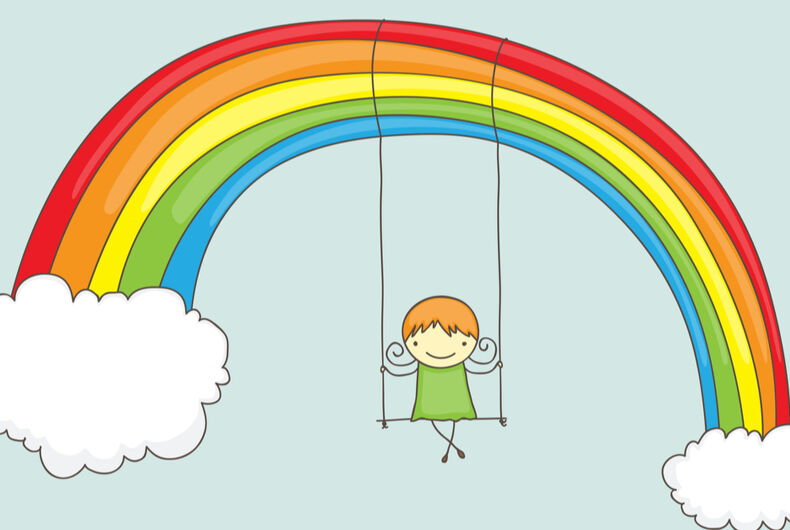 A British woman is up in arms over a social media initiative that encourages people to draw rainbows and post them in their windows. The effort is meant to cheer up scared children when they’re out for walks.

With people around the world quarantined to prevent the spread of the novel coronavirus and thousands already dead, the hateful woman implored people not to draw rainbows, saying, “the rainbow has sadly become a symbol of silencing, sexual stereotyping, and oppression.”

The initiative, started in a Facebook group, has people all over England drawing rainbows and putting them in their windows to comfort frightened children. Waves of cheerful hand-drawn rainbows have started sprouting up in windows across the nation.

TERFs regularly claim that the acceptance of transgender women is an offense against cisgender women and paint themselves as victims when normal people push back on their ridiculous claims.

In a section of Mumsnet called “Am I being unreasonable?” the user started her rant against the rainbows. Other users quickly let her know that, yes, she was being unreasonable – and more than a little bigoted.

“For the past few years the rainbow has sadly become a symbol of silencing, sexual stereotyping, and oppression for a lot of women and those in the LGB community,” she posted. “If you’re thinking of putting one up, please think about how that may make women feel – many of whom have already experienced death threats and lost their friends and jobs thanks to those who wield the rainbow flag as a weapon.”

“I just saw two on my walk just now and it made me feel like shit. Not the intended effect I’m sure. Please consider something else: the sun coming out from a cloud, or a simple landscape. Thanks.”

While people are literally dying and the worldwide economy has tanked leaving millions out of work, the woman is complaining that some people have been shunned for attacking transgender people. And her horrible trauma was caused by someone posting a paper rainbow drawing in a window to cheer up a small frightened child.

“My toddler badly colored in a rainbow because he loves them and he thought it was great to stick it in the window for other kids to see,” one reply read. “We’re going for a walk this afternoon to see how many we can spot. It’s nothing to do with LGBT, bollocks it’s just a rainbow. For children.”

“I think people have more to worry about at the moment than rainbows in windows ffs,” another replied.

“No. Just no. My children are allowed to enjoy looking at a few bloody rainbows in the middle of a global emergency. Save this for another time,” another responded.

But one user may have spoken for the majority with their reply.

“It’s a rainbow…I like rainbow 🌈🌈🌈🌈🌈🌈🌈 The f–king world is ending…this is the least of our worries.”