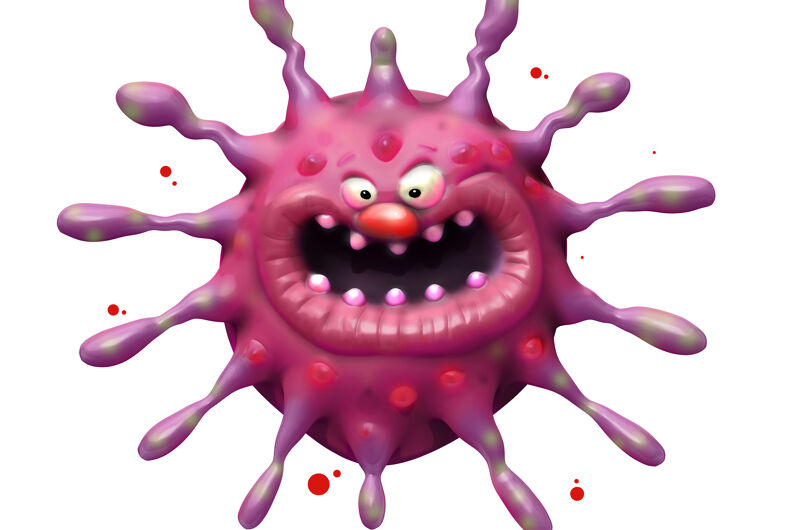 After a few days quarantining alone at home, I’d had enough. I went on Grindr and tested out my new screen name, COVID19. I was thrilled when I immediately got a message.

Oh good, I thought, SOMEONE thinks I’m hot. It turns out it was the actual Covid-19 himself. And he was pissed.

“You’re stealing my identity,” he warned. “I’ll take you to court faster than Devin Nunes can sue a fake cow”

I tried to disarm the conflict by turning the conversation to more pleasant topics, and it turned out we both like a lot of the same things: huge parties, brawls over toilet paper, Liberty University. Despite my better judgment, I was drawn to him.

But, I assured myself, that’s what Grindr is for. I found him infectious.

Well, I explained, I have a lot of time on my hands. I write songs and shows for a drag a cappella comedy group called The Kinsey Sicks, but all our shows got canceled.

“Honey, I know your work, you’re sicker than I am!” he said. “As a professional courtesy, I’m gonna give you a big break. How’d you like to have the first exclusive interview with an actual coronavirus?”

Needless to say, I jumped at the chance, and we set up an interview at my home. Six feet apart, at his insistence.

As so often happens on Grindr, when he first saw me in person, my date looked taken aback. “You don’t look like your profile picture,” he blurted out. “You’re a LOT bigger.”

I’ve been binge-eating since I’ve been sheltering in place, I confessed.

“Gurl, let me offer you some free advice: flatten the curves,” he replied.

“Speaking of losing weight, we gotta make this fast,” he continued. “I’m very busy. I’ve got time for two questions. I’ve just flown in from Europe and I gotta infect millions in the States by Easter. Then all my friends are going to church and it’s BUFFET!!!”

But why are you suddenly focusing on the USA, I asked.

“Europe’s cute, but it has too many rules that spoil the fun. America’s very business-friendly: every parasite for himself. So we’re like, okay, America First!”

So why New York?

“It’s everywhere now,” he retorted, “And talk about laying out the welcome mat! Word on the street is that Trump’s hoarding ventilators so he can give them to red states he’ll need in November.”

“And they call ME a soulless life-form,” he added feverishly.

This led easily to my second question, the one so many friends have asked: given all the interactions the President has with people, why hasn’t the coronavirus infected Trump?

“Would YOU wanna be in him?” he recoiled. “Don’t you think I have a modicum of taste?”

“Besides,” he continued “Can you imagine having to listen to him day and night without being able to turn him off? Isn’t Fox News bad enough?”

And with that, he stormed out of the room.

I was surprised when he FaceTimed me later.

“Listen,” he said. “I’ve only got a moment, but I’ve been talking to my virus friends about that whole Trump infection thing. Maybe we’ll sacrifice an old virus, for the greater good.”

Greater good, I asked? What do viruses care about the greater good?