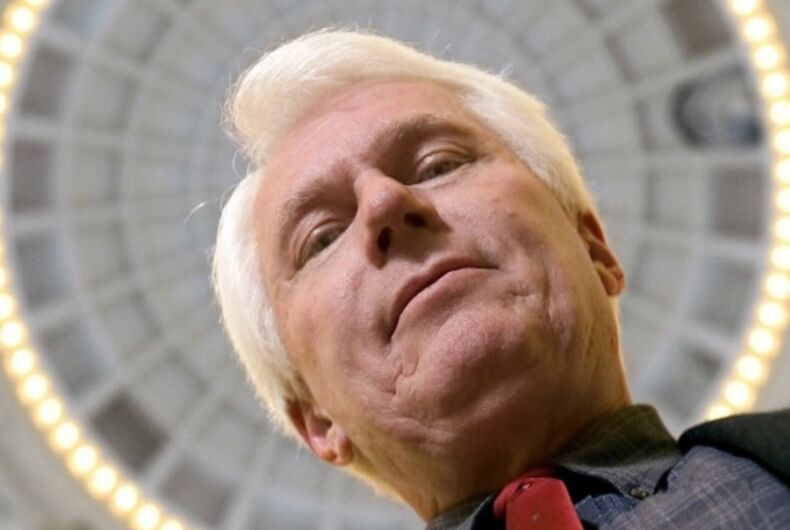 Fischer has devoted the better part of his life to fighting what he calls “homofascists.” He’s the former Director of Issues Analysis for the American Family Association (AFA) – an SPLC designated hate group largely because of work he did for them – and he currently hosts a radio show on American Family Radio, a network over over 180 radio stations.

In a column on AFA’s website entitled “The Good That Could Come From Coronavirus,” Fischer looked at the positive side of the epidemic that has killed over 10,000 people so far after blowing off self-isolation measures as the work of “politicians who hate to see a crisis go to waste.”

“It will protect them from being brainwashed into normalizing sexual deviancy, gender confusion, and Drag Queen story hours,” Fischer continued. “By forcing parents to home school their children at this time, big government nannies may discover that all they did was to give parents a chance to try home education and discover they liked it more than they thought.”

His argument doesn’t entirely make sense on its own. Drag queen story hours are voluntary events that usually take place in public libraries and community centers, not in public schools during school hours. Parents who take their kids to drag queen story hours can probably find ways at home to share age-appropriate LGBTQ culture with their children.

Fischer also predicted that the pandemic will reverse the effects of the Industrial Revolution.

“When America moved from being primarily an agricultural economy to an urban one, one of the disastrous results was how it pulled fathers out of the home and away from their families for the workday,” he wrote.

“This may be the first step in reversing that trend. By requiring businesses to have their employees work from home, fathers will be around their children more, will play a larger role in their children’s lives, and may even become a member of their little home school faculty.”

The last benefit of the pandemic – if ending sexual deviancy in schools and the Industrial Revolution wasn’t enough – is that people are eating together as a family because restaurants are closed. Even though… people can eat together as families in restaurants. Or separately at home.

“Coronavirus might create a fantastic, once-in-a-generation opportunity to reverse some anti-family trends and move back toward the America we used to be,” Fischer concluded. “And there’s nothing wrong with that.”