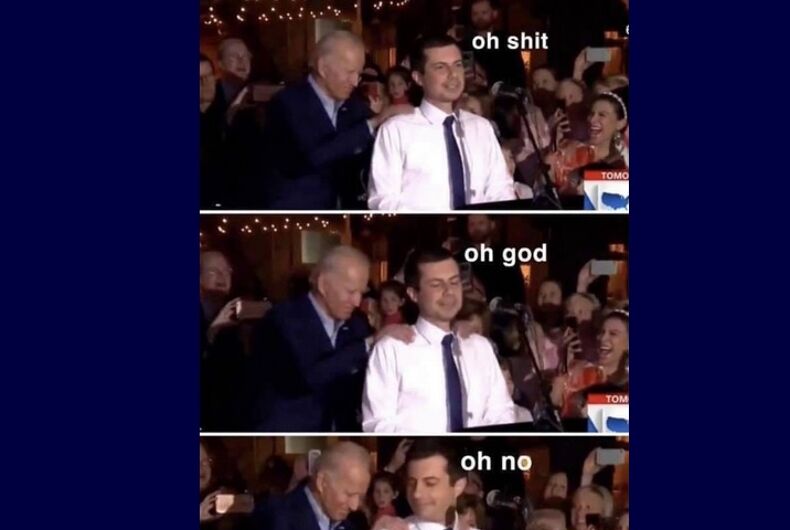 A Republican lawmaker has come under fire for making an anti-gay comment about former South Bend Mayor Pete Buttigieg on Facebook. Buttigieg, the first out Democratic presidential candidate, dropped out of the race and endorsed former Vice President Joe Biden.

Indiana Sen. Mike Young (R) left a comment under a meme about Buttigieg that insinuated Buttigieg is a bottom.

In the meme, Biden is behind Buttigieg while the mayor is at a lectern. Biden has his hands on Buttigieg’s shoulders in still images from the endorsement speech.

“oh shit. oh god. oh no,” the caption reads, implying that Buttigieg is being sexually assaulted by Biden. Conservatives often use images of Biden rubbing women’s shoulders that imply that he’s “creepy” or “rapey.” Since Buttigieg is gay, he replaced the woman in the meme.

State Sen. Young wrote in a comment under the meme: “He’s used to it.” The comment has since been deleted, but Gary Snyder at Indiana Talks caught a screenshot.

It’s 2020 and the @indgop are still issuing homophobic slander against Hoosiers.

Mike Young and the @INSenateGOP should apologize for this now. pic.twitter.com/NIHEvThZQM

“Hoosiers are fed up with homophobia in their state, especially in Marion County,” Brown wrote in a tweet. “What’s worse, it sends a horrible message to LGBTQ youth.”

Hoosiers are fed up with homophobia in their state, especially in Marion County. What's worse, it sends a horrible message to LGBTQ youth.

This is unbecoming of a state elected office holder. The @INSenateGOP & Mike Young should apologize immediately. https://t.co/HjxNui51Ey

In 2012, Young was one of 20 Indiana state senators who signed a letter to the state Bureau of Motor Vehicles asking them to stop issuing specialty license plates that support Indianapolis Youth Group, an LGBTQ youth organization. Christian conservatives accused the organization of promoting “gay sex among young children without parental consent.”

In 2016, he supported a bill that would have expanded religious exemptions in the state – the same bill that then Gov. Mike Pence (R) refused to say wouldn’t legalize discrimination against LGBTQ people. Young said opponents of the bill “demagogued” and “fear mongered” it.