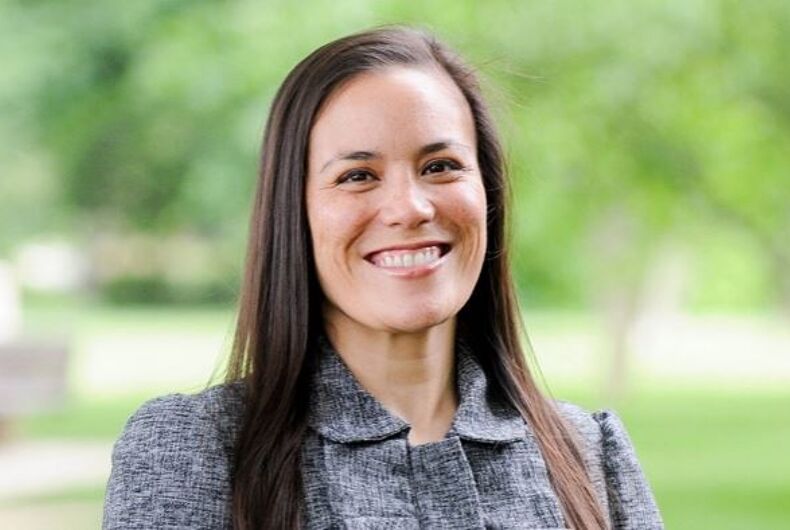 Democrats overwhelmingly chose out lesbian Gina Ortiz Jones as their candidate in Texas’s 23rd, which covers most of western Texas. Republicans roundly rejected an oil-and-gas businessman backed by the religious right.

Related: The extreme fringe of the religious right is gaining political ground

In 2018 Gina Ortiz Jones came within just 926 votes of defeating Republican Will Hurd. Hurd is not running for re-election.

Jones, who would be the first LGBTQ person elected to Congress from Texas, won with 70 percent of the vote.  McFarlin came in last in a five-way race for the Republican nomination.

McFarlin’s wife credited a religious right “missionary” running for Congress in California for talking her husband into running. Both men are believers in “dominionist Christianity” and they both lost their respective races.

“Texans have never sent an openly LGBTQ person to represent them in Congress, but I am confident Gina will end that come November,” former Houston Mayor Annise Parker, President & CEO of LGBTQ Victory Fund, told LGBTQ Nation. “Gina speaks openly and eloquently about her experiences and perspectives as an LGBTQ woman, first-generation immigrant, and a veteran, and that authenticity resonates with voters.”

“Gina’s primary victory puts a crack in the lavender ceiling that has held back LGBTQ Congressional candidates in Texas for generations – and that ceiling will shatter on Election Night,” Parker added. “We have an opportunity to double the number of openly LGBTQ members of Congress this election cycle and Gina’s primary victory makes it that much more likely.”

I’m honored to be the Democratic nominee in #TX23. I’ve dedicated my life to public service, and I’m running for Congress to expand the opportunities that allowed me to grow up healthy, get a quality education, and serve our country. https://t.co/fmkHbLCrHe

Transgender teen kicked out of school dance for wearing a blouse