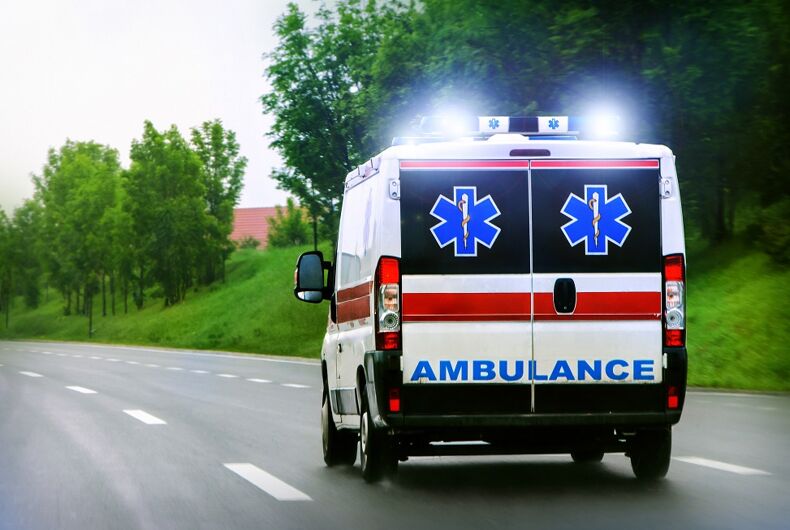 A man was given community service after he confessed to attacking a paramedic who was trying to help him while shouting anti-gay slurs at her.

Dean Stevens, 28, of Shoreham in southern England collapsed one day this past August. Paramedic Rose Waller showed up to help him and get him to a hospital, the Argus reports.

Related: Lesbian left covered in her own blood after two men brutally beat her

But instead of gratitude, she got homophobic abuse. Stevens called Waller a “c**t” and a “dirty dy*e,” according to prosecutor Suzanne Soros.

“I’m going to kill you,” he allegedly told her.

“He brought his face close to hers to make her feel intimidated and caused damage to the glass inside the ambulance when he kicked out,” Soros said.

He kicked Waller on her shoulders and neck. She tried to hide from him in the ambulance, but he still injured her.

When the ambulance finally got to hospital, she ran out of it and into the lobby, looking for a police officer.

Officer James Savill went to go see Stevens and found cocaine on him, and he said that Stevens continued to shout anti-gay slurs.

“I have never been subjected to such a blatant attempt to injure me,” Savill told the court. “He tried to kick me in the face, he wanted to leave his mark on me.”

“I don’t know how he thinks what he did to me or to my paramedic colleague is acceptable,” he added, saying that he considered quitting his job after the attack.

The anti-gay slurs continued as Stevens was taken into custody.

Stevens pled guilty to two counts of assault, two counts of harassment by using threatening or abusive behavior, and possession of cocaine.

District Judge Amanda Kelly said that the victims were “members of the emergency services doing a difficult job to keep you and the public safe.”

“They were abused and assaulted in a vile homophobic fashion,” she said. “You should be ashamed about the way you behaved. It was appalling.”