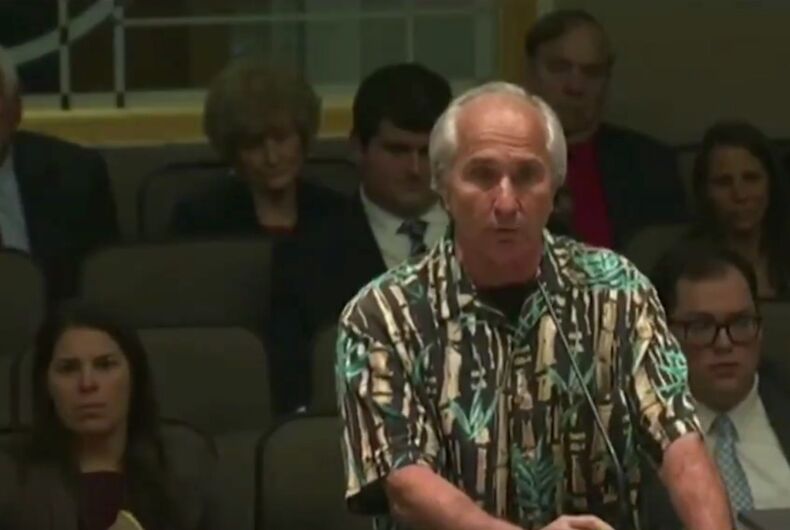 During a public testimony hearing, an anti-LGBTQ rant from a Florida man was so offensive that a Republican lawmaker had to shut him down.

Greg Pound—who has made a name for himself by attending public hearings to tout conspiracy theories and spew offensive language—was attempting to testify before the Florida House Appropriations Committee about a controversial school voucher program that provided funding to many anti-LGBTQ Christian schools.

Pound opened his testimony by claiming that LGBTQ people are pedophiles.

“Just a real quick question on the alphabet there,” he said. “The L is for lesbians, the G is for gay, B is for bisexual, T is for transgender, Q is queer, and then P would be pedophile. Now, let me ask you this … where do these people get their children?”

Even for Republican Committee Chair Travis Cummings, who voted against a 2015 bill that would have made it legal for gay couples to adopt children, Pound’s words were too much.

Pound demanded to know on what grounds.

Cummings then replied, “On what grounds? What’s come right out of your mouth. It’s offensive.”

As Pound was removed by security, others in the room applauded.

Cummings has received praise for his actions on social media, including from gay Democratic Representative Carlos G. Smith, who tweeted:

“A member of the public just told our House Appropriations Committee LGBTQ stands for ‘lesbian, gay, bisexual, transgender and P for pedophile.’ Thank you chair @Travis_Cummings [sic] putting a stop to this bigoted rant. Homophobia is alive and well in Florida.”

A member of the public just told our House Appropriations Committee LGBTQ stands for "lesbian, gay, bisexual, transgender, queer and P for pedophile." Thank you Chair @Travis_Cummings putting a stop to this bigoted rant. Homophobia is alive and well in Florida.

According to WUSF News, the committee did end up voting to expand the school voucher program.