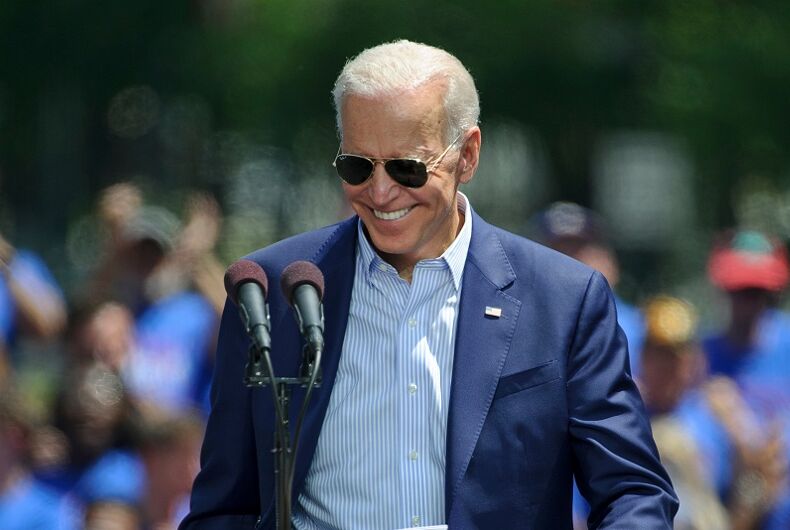 MAY 18, 2019: Former vice-president Joe Biden formally launches his 2020 presidential campaign during a rally May 18, 2019, at Eakins Oval in PhiladelphiaPhoto: Shutterstock

Mythology drove the leadership of the House (with the approval of the Human Rights Campaign) to expunge trans people from that year’s Employment Non-Discrimination Act (ENDA) bill and to then force a floor vote on a non-inclusive bill on November 7, 2007.

But the reality is that the House did not have to call a vote on it on November 7.  It could have been November 8 or December 8 or pretty much anytime.  Because nothing was really going to happen in the long run anyway. George W. Bush being president.

Related: BREAKING: Satan resigns because he can’t keep up with Donald Trump

There was nothing special, much less mandatory, about November 7, 2007. But some dates are special – with election days being at the top of the list.

Many people who seem to be otherwise progressive and rational voted for Jill Stein or for no one at all in 2016. And many of those stand by their decision while seemingly preparing to take a similar course of action this year if their candidate isn’t the Democratic nominee.

Three unassailable facts lay waste to any logic purporting to justify such a course of action.

Sadly, the thought of a Bernie Sanders nomination has proven to be too much for enough so-called traditional Democrats. And, be it the result of that or the result of Don Vito Biden cashing in on a lifetime of political favors owed to him by people in and outside of government, it is clear at this point that a Sanders nomination is not going to happen.

As a man of the 21st century, Biden is 20th century to the core.  Sure, what sane person out there isn’t confident that Biden would have done a better job handling the coronavirus than Donald Trump has?  But that says next to nothing.

A history of being a terminal moderate does.

Why should anyone believe that as president with (hopefully) a Democratic Congress, Biden and his administration will not dutifully decalcify when Mitch McConnell and Kevin McCarthy begin whining that things are moving too fast – precisely the way that no Democrat’s Republican counterpart would have even considered doing during 2009-10 had a Democratic Congressional minority been whining about the initiatives of the McCain-Palin Administration?

Biden spent 36 years in the Senate and eight more as vice-president. Has he ever uttered a single word evidencing an understanding of what today’s Republican Party truly is?

Its fascistic desire for a Wall Street-branded form of Christian Reconstructionism was visible decades ago – at least to anyone willing to look.  His professed willingness to consider a Republican running mate is as frightening as the modern-day Republican belief that what are commonly referred to as the teachings of Jesus and the ravings of Ayn Rand can coexist.

Biden either doesn’t know or doesn’t care about what happened when Abraham Lincoln tried to – cough – embrace a return to civility and – hack – unite the country by picking a running mate from the other major party in 1864. While he isn’t Trump’s-initial-response-to-the-Coronavirus scary, his addiction to the notion of bipartisanship for bipartisanship’s sake is quite unnerving.

When Biden could have singlehandedly extinguished the nomination of Clarence Thomas to the Supreme Court, he didn’t.  Consequently, he is a culpable party as to all of the 5-4 Supreme Court decisions in which Thomas was one of the five. That’s almost thirty years of undeserving presence on the high court.

Yet in 2020, he is our only chance to put a stop to the civil rights bloodletting.

A Biden win in November will not, by itself, undo any anti-LGBTQ interpretation of Title VII that might emerge prior to the election.  Supreme Court justices that he might appoint would be able to do no more than issue an opinion in some future case stating that the likely anti-trans and anti-gay opinion of this spring’s majority “was not correct when it was decided, and it is not correct today.”

He won’t manage to cash in all of his political chits while winning the nomination and the election.  On Jan. 20, 2021, Biden will enter the White House with more hardcore congressional experience than any incoming president since Lyndon Johnson.

Yet as to political chits, Biden will not merely be a creditor.  He will also be debtor – to all of the currently disaffected who cast votes for him.

Biden will be able to force the post-ENDA Equality Act Spring.

Oh, make no mistake. He’ll also have to clean up a far broader civil rights mess left behind by Donald Trump and decades of conservative federal judicial appointees, many of whom Biden had no problem handing lifetime appointments to under prior Republican presidencies.

So, using his political heft to forcibly prioritize the Equality Act will be just part of Biden’s presidential janitorial project.

However, it is something that he will damn well owe to us. If not on day one, then certainly by this time next Spring.