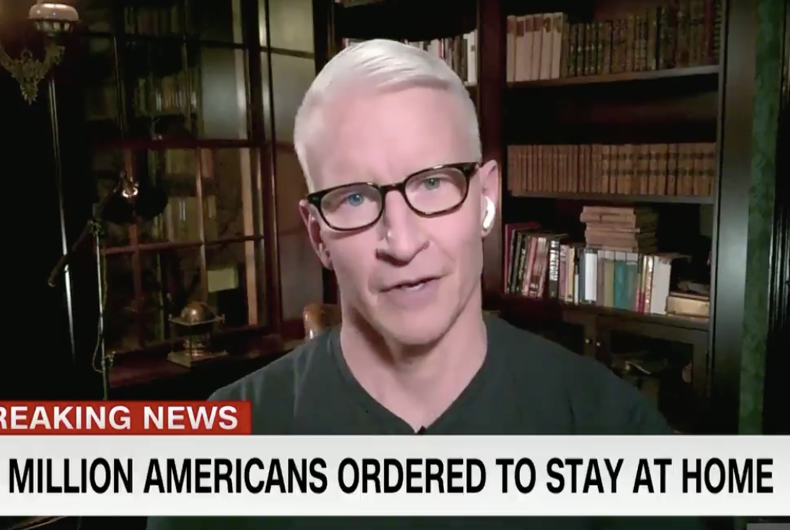 Yesterday, CNN’s Anderson Cooper anchored the entire hour of his primetime news show, Anderson Cooper 360°, from his New York home instead of their new studio in Hudson Yards.

Cooper opened the hour by explaining that the move was entirely “out of an abundance of caution” because a staff member on the show feared they had the symptoms signaling they had coronavirus.

Related: Calls for Wendy Williams to be cancelled are renewed after catfish victim is mocked on air

Cooper, wearing a plain green t-shirt and a single Apple Airpod, opened the show by explaining that “tens of millions more Americans saw their worlds shrink to four walls, the walls of their home… myself included.”

—@AndersonCooper is broadcasting from home tonight, telling viewers that someone on his team thinks they might be positive for coronavirus. Cooper says he feels fine, but has taken the step out of an "abundance of caution." pic.twitter.com/AT3oFwksEa

Staff at the network’s new Hudson Yards headquarters in New York also received notification from the company of the potential case. “We want you to know that this afternoon we were made aware of a potential case of COVID-19 with a staff member of the ‘AC 360’ team,” they wrote in an email. “This person presented symptoms, contacted their doctor right away and has been advised to self-quarantine out of an abundance of caution.”

CNN advises that anyone who may have had “close, prolonged contact” with the staffer (without providing their name) to self-quarantine. The network has not publicly commented on who the staffer is or details of their assignment, not even ruling out that Cooper himself could be the person in question.

In their email to staff, CNN did pledge to clean the entire 20th floor where the show is produced, and their control room.

The rest of Cooper’s show went on as normal, and the out journalist carried on as other CNN reporters talked about a positive coronavirus diagnosis in Vice President Mike Pence’s office, and the 75 million Americans under order to stay home between 4 states.

75 million Americans have been ordered to stay at home. Here’s how it looks across the country. @nickwattcnn reports https://t.co/XVXcPQ7f0f pic.twitter.com/9vPeLXT6xl

If these are truly just precautionary measures, Cooper and his staff has good reason to be worried the pandemic could reach his show. Cooper’s friend and New Year’s Eve co-host, Andy Cohen, announced yesterday that he tested positive for the virus and that production for his show, Watch What Happens Live, would suspend production.

Additionally, MSNBC’s Craig Melvin is also self-isolating whilst co-hosting his hour of MSNBC Live from home since Wednesday. The NBC News family has already lost a staff member, audio technician Larry Edgeworth, to the virus.

In need of more blood donations? End the ban that prevents LGBTQ men from contributing.