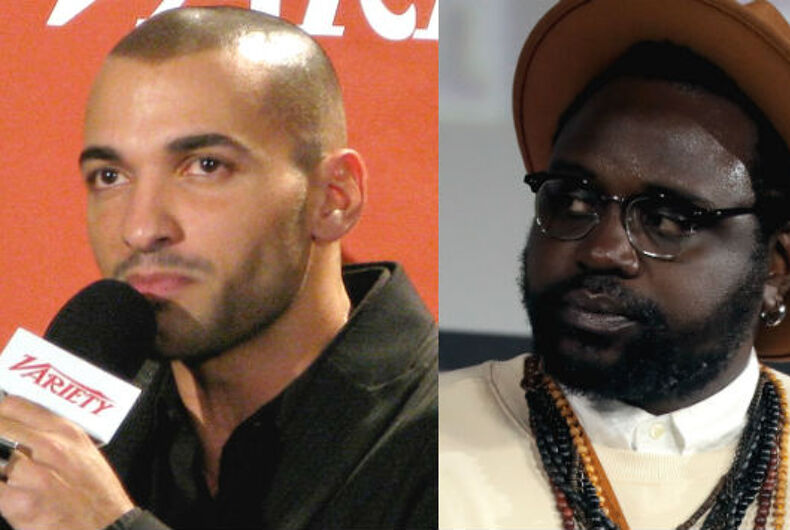 Phastos — an ambivalent and immortal being who can fly, shoot energy beams, and invent technologically complex weapons — will be played by Brian Tyree Henry, a not-out actor known for his roles in Atlanta and If Beale Street Could Talk. Henry’s casting has led some to wonder whether he’ll come out soon since Marvel Studios originally sought an out actor to play Phastos.

Regardless, Sleiman called Henry “a tremendous actor” who conveys a child-like innocence in his role as Phastos. “I think it’s important,” Sleiman said, “for the world to be reminded that we in the queer community were all children at one point…. We’re always depicted as sexual or rebellious. We forget to connect on that human part.”

Sleiman called the kiss between Phastos and his husband “a beautiful, very moving kiss,” adding, “Everyone cried on set. For me, it’s very important to show how loving and beautiful a queer family can be.”

Their kiss may be the first of several queer on-screen representations Marvel fans can expect in the near future.

In the upcoming film Thor: Love and Thunder — the fourth film installment of the Norse-inspired series due out in November 2021 — out actress Tessa Thompson will play Marvel’s first explicitly LGBTQ character reprising her role as Valkyrie, a former slave-trader now seeking a queen to rule at her side in New Asgard.

Some speculate that she may appear in Thor: Love and Thunder as the Thor comic books have featured Marvel Comics’ only transgender superhero, an Asgardian warrior named Sera.

However, in its casting call, Marvel said the trans actress would play a character named Jessica, leading some to wonder if she might actually appear in any of Marvel’s films that begin production this year, including Doctor Strange in the Multiverse of Madness, Hawkeye, Loki, or Shang-Chi and the Legend of the Ten Rings.

These explicitly queer characters are a big deal seeing as Marvel Studios’ 23 superhero films released over the last decade have basically had no queer representation whatsoever, save a grieving man in The Avengers: Endgame. This is notable seeing as Marvel has over 98 out gay characters in its various comic book series.

Sleiman initially said that he was straight in a 2009 interview while playing the gay Muslim character, Mohamad “Mo-Mo” De La Cruz, in Showtime’s medical comedy-drama series Nurse Jackie. In August 2017, Sleiman publicly came out as gay.

Students thought their Mormon university was OK with gay people for a second. Oops.