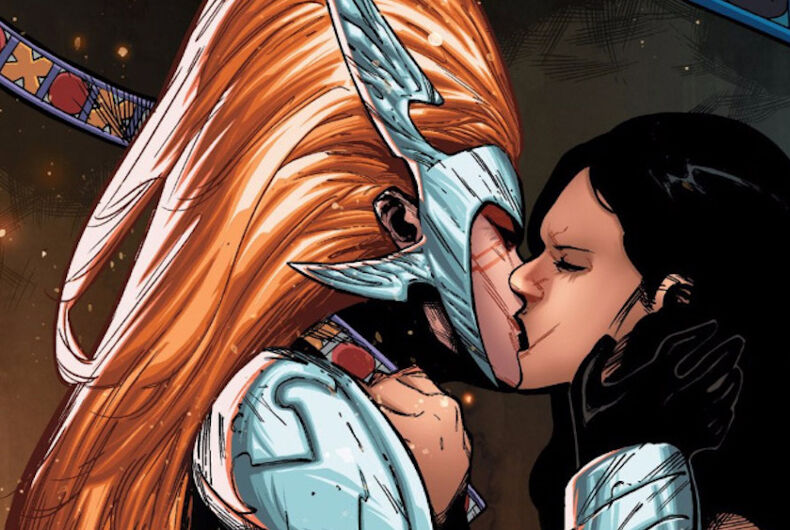 According to Geeks WorldWide, a recent casting call issued by Marvel is seeking a “transwoman actress of any ethnicity in her 20s to 30s” to play a character named Jessica.

It’s unclear what film Jessica will appear in, but because the filming is set to start in 2020 it could be any of the following upcoming Marvel films: Doctor Strange in the Multiverse of Madness, Hawkeye, Loki, Shang-Chi and the Legend of the Ten Rings or Thor: Love and Thunder.

Geeky insiders are betting that Jessica is most likely to appear in Thor: Love and Thunder, the fourth installment of the Norse-inspired series due out in November 2021. That’s because Thor is the only Marvel Comics superhero comic book ever to feature a transgender heroine.

Her name is Sera; Marvel introduced her in 2017 in the Thor-related comic Angela: Asgard’s Assassin #3. Hornet explains who she is:

Sera is unique in that she was biologically born male and began a conscious transition towards a female identity. As she herself says in Angela: Asgard’s Assassin #3, in which reveals her origins, “I was always Sera.” It’s even implied that Angela (Thor and Loki’s long-lost sister) prefers Sera in her female identity.

At July’s San Diego Comic-Con, actress Tessa Thompson revealed that she’ll play Marvel’s first explicitly LGBTQ character in Thor: Love and Thunder, reprising her role as Valkyrie. In the film, Valkyrie will search for a queen to rule at her side in New Asgard.

Valkyrie is bisexual in the comics and had a relationship with mortal scientist Annabelle Riggs in a July 2013 issue of Fearless Defenders 7. Valkyrie appeared in the third Thor film, Ragnarok, as a drunken slave trader who returns to her home territory of Asgard and is chosen to rule over the other displaced Asgardians in New Asgard at the end of the 2019 film The Avengers: Endgame.

Should ‘Pose’ rewrite ACT UP’s diversity issues to include more people of color?