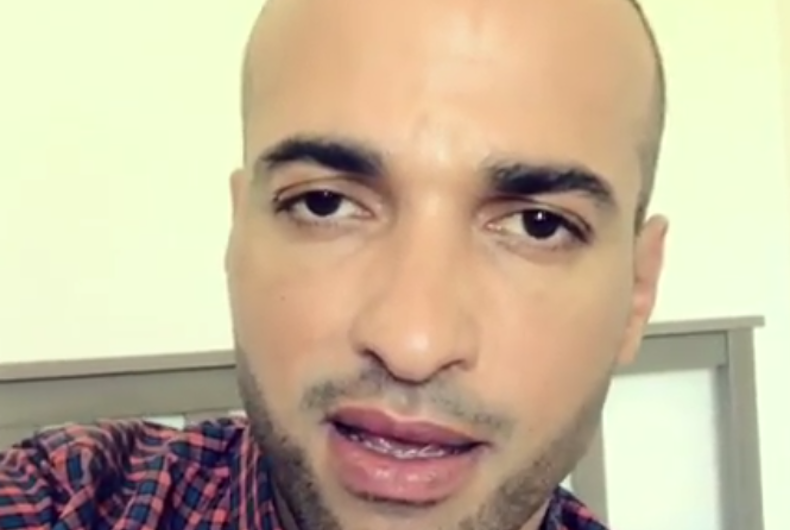 Actor Haaz Sleiman, known for his roles on Nurse Jackie, The Visitor, and Killing Jesus, came out in a video posted to social media.

He starts the video by discussing a recent report that said that more LGBT people have been killed so far in 2017 in hate crimes than in all of 2016.

In a 2009 interview with The Advocate, Sleiman said that he was straight and had a girlfriend.

He wrote on Instagram that he told Showtime, which aired Nurse Jackie, that he didn’t want to discuss his personal life in interviews, but the “idiot interviewer” asked him about his sexuality anyway.

“I was so shocked,” Sleiman wrote. “I froze. My body started shaking. And then I lied and said I was straight. Shame on gay people who are not kind to other gay people. He did that on purpose.”

He was “shocked” that he was asked about his sexuality? By The Advocate? Didn’t anyone tell him what The Advocate is?

The interviewer was Brandon Voss, who now works for Logo at NewNowNext.com. Voss says that Showtime never informed him that personal life questions were off-limits, and if Sleiman had said he didn’t want to talk about his sexuality then the question would not have been published. Voss has apologized to Sleiman for the miscommunication.

Frankly, it’s hard to feel much sympathy for Sleiman in that situation. The Advocate is an LGBTQ publication, so someone’s sexual identity is relevant to the audience.

Plus there’s nothing shameful about being gay, so I don’t see what’s “not kind” about asking someone about their sexual identity.

Writing for LGBTQ websites, I have also asked that question. One time the person being interviewed didn’t want to answer. It was OK, I didn’t press further, and the exchange didn’t get published.

And other times people are happy to talk about being gay or bisexual, and that question opens up a discussion. I once interviewed a singer and asked how she identified, and she said she was bisexual and had some interesting things to say about biphobia in the music industry. (That interview never got published… long story.)

Because coming out as a public figure is not the same thing as coming out. Sometimes celebrities are out in their personal lives to everyone who matters to them but haven’t talked to the media about their sexuality. So they’re out as much as any person is usually out. It’s just not known to a larger audience, and it’s not going to be known unless someone asks.

Also, for the reason that Sleiman now acknowledges – hate against LGBTQ people – it’s important for public figures to come out. Even if they’re not the next Ellen or Ricky Martin, they can still have a positive impact on the way straight people view LGBTQ people and on the way we view ourselves.

Twitter made fun of scared straight boys with hilarious sarcasm