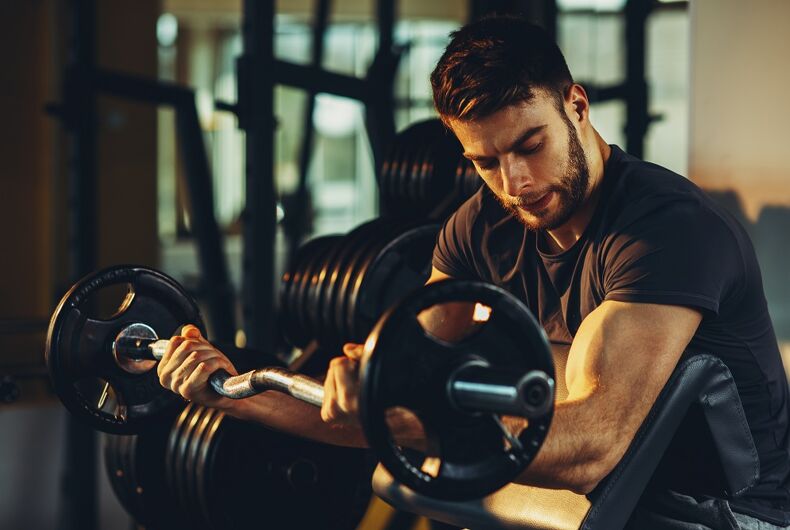 Fellas is it gay to check your own form when lifting? Photo: Shutterstock

For years, insecure straight men have turned to Twitter to find out if something they do is gay. A lot of these questions are kinda joking, but really not….

Fellas, is it gay that I really enjoy the show Glee? (I seem to have one of these questions weekly)

This past week, though, “Fellas is it gay” jokes were the rage, taking heterosexual anxiety to the extreme.

fellas, is it gay to make money?? i mean youre just collecting pictures of other men ??

fellas, is it gay to go to church? i mean yall on your knees for a man idk

FELLAS: is it gay to drink almond milk? I mean u drinking nut ?????

Some went after how being a man means someone is already doing all sorts of things with a man.

Fellas is it gay to pee? You're literally holding a dick ?

fellas… is it gay to look in the mirror? i mean you literally checkin a man out.

Some were more scientific.

fellas, is it gay for a guy to like a girl? half her genetics came from a MAN. ion know …. what y'all think?

fellas, is it gay to look at the eclipse?? idk staring at two balls in the sky sounds pretty gay to me??

Fellas, is it gay to breathe? I mean shit y'all be breathing the same air as ya homies. Sus af if u ask me lmao

Some were more philosophical.

Fellas.. Is it gay to be a man?? I mean assuming an Aristotelian view of mind-body dualism, you're literally inside a man at all times ???

fellas….is it gay to exist?

And some were pretty direct. I would say no to this one… could be bi.

‘Patriot Prayer’ rally in San Francisco canceled because of criticism

‘Nurse Jackie’ actor comes out as gay… and a bottom