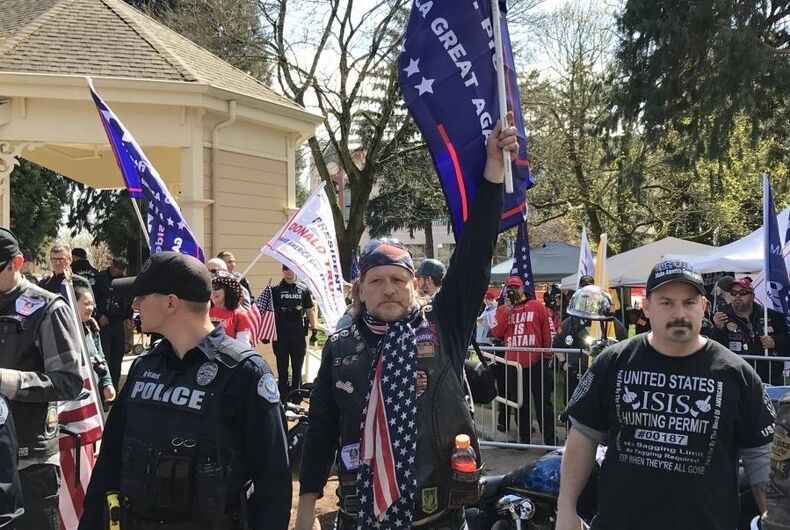 A rally organized by the group Patriot Prayer has been canceled due to what its organizer called a “smear campaign” against participants.

The rally in San Francisco was scheduled for 2 p.m. at Crissy Field Park today and was advertised as a “day of freedom, spirituality, unity, peace, and patriotism.” The rally permit banned firearms, weapons, and even items that could be used like weapons, like selfie sticks.

Patriot Prayer member Gabriel Silva said that there was a “smear campaign” against them.

In canceling the event, Gibson said that people should attend a rally scheduled for tomorrow in Berkeley instead. “Berkeley is a better situation because we don’t feel that we’re walking into a trap,” Gibson said on Facebook. He went on to say that the event would have been “a huge riot.”

The Berkeley event has also been canceled. The organizer cited “safety” concerns.

“Intermingling of protesters and rally-goers would be a horrible idea,” Silva told The Guardian. “It would lead to nothing but casualties.”

At a Seattle rally earlier this month, Gibson denounced neo-Nazis and white supremacists. But in other rallies that Patriot Prayer organized, hate groups frequently attended.

For example, Identity Evropa, a white supremacist organization that likes to start street fights, has been seen at Patriot Prayer rallies in Portland.

Participants in his rallies sometimes bring baseball bats and other weapons. In April, Jeremy Christian attended a Portland rally with a baseball bat. A month later, he stabbed two men to death in a train when they tried to defend two women he was harassing because they were wearing hijabs.

Twitter made fun of scared straight boys with hilarious sarcasm