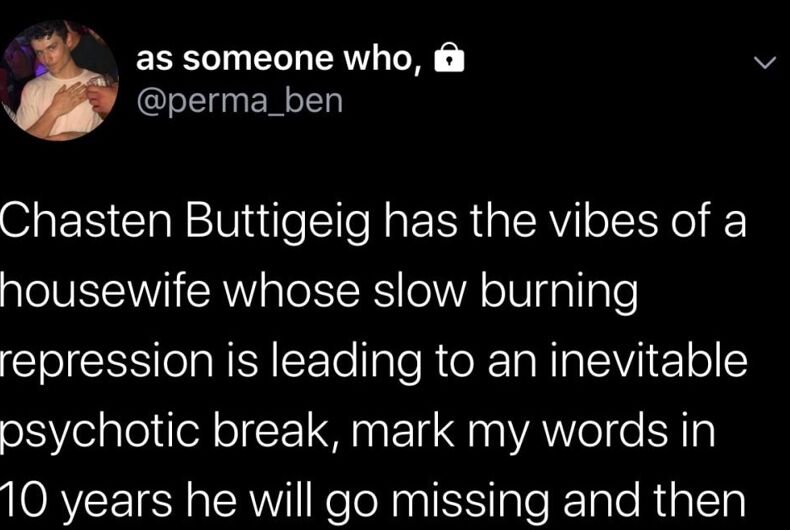 Bernie Sanders’ former regional field director for Michigan, Ben Mora, has been fired after it was revealed he ran an anonymous Twitter account that slurred and insulted other Democratic presidential candidates. Many of the gay staffer’s tweets targeted out candidate Pete Buttigieg.

The revelation has hampered Sanders’ scripted condemnation of the online vitriol spewed by some of his most dedicated followers. The Daily Beast tracked down Mora as the author and notes that it would seem “at least some of the Vermont senator’s most toxic support is coming from inside the house.”

Mora, using the account @perma_ben, tweeted that Buttigieg “is what happens when the therapist botches the conversion.” In another tweet, he asserted he could “never trust buttigieg because he combined the natural devious disposition inherent in gay men with a bloodthirsty careerist drive.”

One of the most vicious tweets targeted Buttigieg’s spouse, Chasten.

“Chasten Buttigieg has the vibes of a housewife whose slow burning repression is leading to an inevitable psychotic break, mark my words in 10 years he will go missing and then resurface in Ft Lauderdale after getting busted for running a meth racket w a bunch of Guatemalan twinks,” he sent last October.

Sen. Amy Klobuchar (D-MN) was attacked for her looks.  He said her face is like “that optical illusion where it’s an old lady but also a young woman depending on how you look at it but with her it’s just two different old ladies.”

“When [Sen. Elizabeth] Warren talks about how she knows she’s Native American because of her ‘high cheekbones’ where sis? Another lie. You look like shit,” Mora tweeted in October.

Other tweets on the account were more general queer takedowns of pop culture and the LGBTQ community, like mocking would-be activists shirtless Instagram photos or dragging the Queer Eye cast as “neoliberals.”

“Imagine having sex with a Warren gay like taking someone’s virginity is kind of a big deal…,” he tweeted in 2019.

“Nate Silvers bullshit starts to make a lot more sense when you realize he is probably the ugliest gay man to ever live,” he tweeted last September.

After ignoring a request for comment before publication, the Sanders campaign responded after the expose went online.

“We are running a multiracial, multigenerational campaign for justice where disgusting behavior and ugly personal attacks by our staff will not be tolerated,” Mike Casca, the Sanders campaign’s communications director, told the outlet.

Casca’s statement mirrors comments made by Sanders after rising disgust with the online harassment by a portion of followers.

“I have heard about it,” Sanders told journalist Jake Tapper after being asked about the “Bernie Bros” terrorizing social media and frequently vociferously attacking women. “It’s disgusting. Look we don’t want that crap. That is not what this campaign is about.”

Sanders has also suggested the critiques are unfounded and the offensive social media attacks are being made by Russian troll accounts. News that Russia has been meddling in the election to benefit Sanders’ campaign has been mostly brushed off by the campaign, saying they didn’t need the assistance.

Now evangelicals are mad at Clifford the Big Red Dog