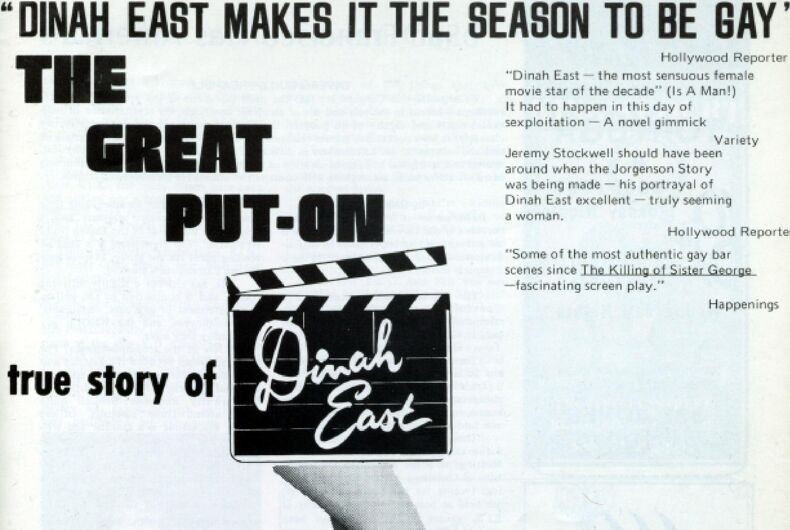 In 1970, Gene Nash wrote and directed a movie about “A glamorous movie queen of the 1950s”. The movie details the aftermath of the revelation that said movie queen “is revealed to be a man whose secret led to complicated relationships.”

It’s not Myra Breckinridge nor is it The Christine Jorgensen Story, but Dinah East – a trans movie produced in 1970 and, while it isn’t completely not detestable, it remains troublesome on several fronts.

After hitting theaters sometime in late 1970 or early 1971, it seemingly disappeared. After accidentally learning of the film while perusing 70s issues of the Advocate on microfilm a decade and a half ago, I asked around and found that it appeared to have become a ‘lost movie,’ meaning no copies of it were extant.

That turned out to not be the case – not long afterward, I found it on DVD.

The plot of the movie is rather easy to lay out: Think Tootsie, with Michael Dorsey having to adopt the Dorothy Michaels persona in his teens instead of his 40s – and then til’ death would they part.

Dinah East is a famous movie star, in or near her 40s. As the movie opens, she dies in the back seat of her snazzy, chauffeur-driven car. Her autopsy reveals something that Dinah had kept secret for her entire career. While there is just enough ambiguity to suggest that she might be a trans woman, the bulk of the movie – consisting primarily of flashbacks to Dinah’s interactions with various people, some intimate – makes a much stronger case for Dinah simply living through the persona she used to secure her first acting job.

It doesn’t sound like a strong enough plot to justify marketing Dinah East with “The Great Put On” in bold, but that’s not to say such a story couldn’t be told without denigrating trans women, intentionally or otherwise, by continuing to frame trans people are ‘deceivers.’ For example, Hedwig and the Angry Inch was an insult of the highest order to trans women, even though the basic story could have been told without being so. 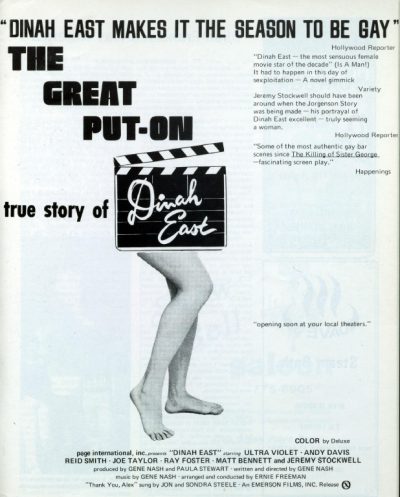 Though there weren’t ‘wobbly walls’ a la so many Doctor Who episodes of the same era, I’m not sure “opulence” is a proper descriptor.  In all likelihood, whatever rental fee secured the use of the vehicle that Dinah expired in was the largest single line item in the film’s budget. (I guess the “old Selznick Studio” wasn’t as bad as it could get, though; it could have been Spahn Ranch.)

Even while skewering Gene Nash’s writing and directing, the Advocate’s review of Dinah East nevertheless heaped praise on the film’s “opulence of the production,” which primarily took place at “the old Selznick Studio in Culver City.” Drag Magazine’s Linda Lee damned the movie with faint praise, calling it “pretty good” but, making sure she was not misunderstood, added “that’s the most that can be said about it.”

At the time, one thing that everyone tried to dance around was the obvious: the movie was a thinly veiled exposition upon the rumor that a certain directionally-surnamed film star of the 1930s was actually a man – Mae West. In the early 1970s, unlike the character of Dinah East, West was still very much alive and still very capable of filing defamation actions.

Whether or not Mae West was anything other than an over-the-hill sexmonger is subjective, but any suggestion that the made-up name “Dinah East” was not a play on West is laughable.

What isn’t laughable is the portrayal of Dinah by Jeremy Stockwell, someone I can find no solid reference to since the film’s release. (An actor with that name does pop up on searches, but that Jeremy Stockwell has a listed birth year of 1959, making him an impossible 11 at the time of Dinah’s filming.)

He was quite believable in the role – which may have led to an element of the film we could do without: his end credit. As if to emphasize ‘yes, the person playing Dinah was a guy,’ his credit comes last and he’s depicted in boy mode – getting up from a chair and walking away.  It almost seemed as though he was flipping the bird at the movie I’d just spent 90 minutes of my life watching.

I can’t say I would want to see a new Dinah East film – but that doesn’t mean I want Dinah to remain dead.  Apart from my trans-centric critiques, my one broad assessment of the movie is that the pacing and dialogue seemed better suited for stage than screen.

This is similar to many older films centered on trans characters – I wouldn’t oppose the idea of a Christine Jorgensen Story remake, though I also can’t really see the point of doing so. Her autobiography is historically significant but, ultimately, it falls into that wide swath of the trans auto/bio genre containing relevant information while being examples of less-than-great of writing. I’d recommend sticking with the 1957 audio recording of Christine Jorgensen Reveals – not the stage recreation thereof.

Think about Tom Ewell’s scenes in the movie version of The Seven Year Itch where he’s alone and talking. Yes, they serve a purpose for driving the story, but they always strike me as a bit sad – even when he’s frenetic.  Still, I bet they were a bit more powerful when delivered in person to an audience.

Undoubtedly, some of the dialogue in Dinah was meant to evoke sadness or even pity, but much of it just comes off as boring.  Linda Lee’s assessment was that Nash was “so anxious that the characters are not overplayed” in his writing that “they all wind up being underplayed.” Arguably the one exception is Dinah’s colloquy with Andy Warhol superstar Ultra Violet which, due to less-than-stellar acting, was just annoying.

So, fifty years after it was produced and fifteen or so after I ran across the nearly-forgotten, almost-lost celluloid quasi-extravaganza, I have to say that if, perhaps, Harvey Fierstein was to get hold of the rights to Dinah East…And if he punched up the dialogue a bit…And if he made sure the acting was first rate…I’d be all in for an evening with Dinah East at the theater. Even if Harvey somehow misses the mark by a bit, it would not be, as Linda Lee ultimately summed up the movie, “rather like a banquet, all the courses of which taste like Cream of Wheat.”

Will endorsements from LGBTQ celebrities really sway any voters?